﻿ ﻿ Museum of the Statue of Liberty

Museum of the Statue of Liberty

The Museum of the Statue of Liberty is on the second stage of the pedestal. This is of course in Liberty Island in New York Bay. This island has an old fort, Fort Wood, an artillery bastion for the defense of the city in the nineteenth century. This fort was demilitarized and it is in the center we built the pedestal of the statue. Today the bastion completely encircles the pedestal. The visitor thus requires strong Wood to enter the museum, and this is once on the platform of the strong that it has access to the main door of the pedestal, within which he can climb to the top by stairs or elevator.


Visit of the museum 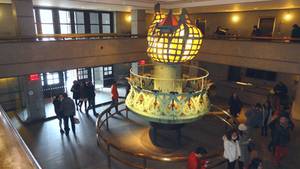 The old torch of the Statue of Liberty

The museum consists of several parts. From the entrance there is a large room, quite dark and high levels of both the center of which is the torch of the statue, which was in place until 1986, her replacement during renovation work done to mark the centenary of the statue. Today the torch a uniform structure, that of the time consists of a kind of enlightened roasting inside, or at least that was the time. After 100 years in the weather we understand why it is a little damaged. A balcony goes around the room and the visitor can see this large object from the ground or above. Note that the current torch Although construction is different, has the same shape and its balcony is exactly the same, just a little more modern. 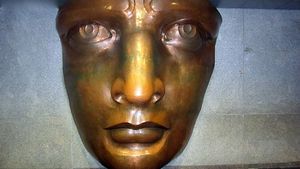 The face of the statue, in the museum

The face of the statue, in the museum 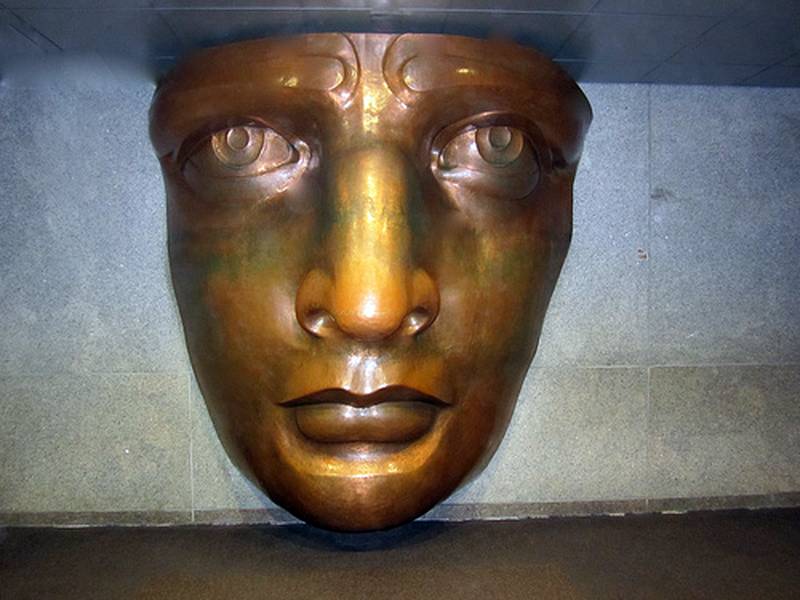 The face of the Statue of Liberty, as in the museum

The tour continues to the 2nd level balcony that allows you to see the torch high. In a hallway, a little further, there is a small bifurcation leads to a copper replica of the face of the statue. It seems very cramped between the floor and the ceiling of this small room. The use of copper for this replica watch the natural color of the statue, without its natural oxidation which makes the gray-green. Out of the context of the statue as close, we face seems terribly austere, much more serious than it actually is. Besides, this is not a perfect carbon copy: The expression of the mouth is a little less contemptuous, nose copying is bigger, the nostrils are open, and expression of the front lines are not that marked by linear hammerings, while those of the original statue has a front hammered into broad plates. The eyes also are more successful on the original statue, that of copying are coarser.

Face of the statue

Face of the statue 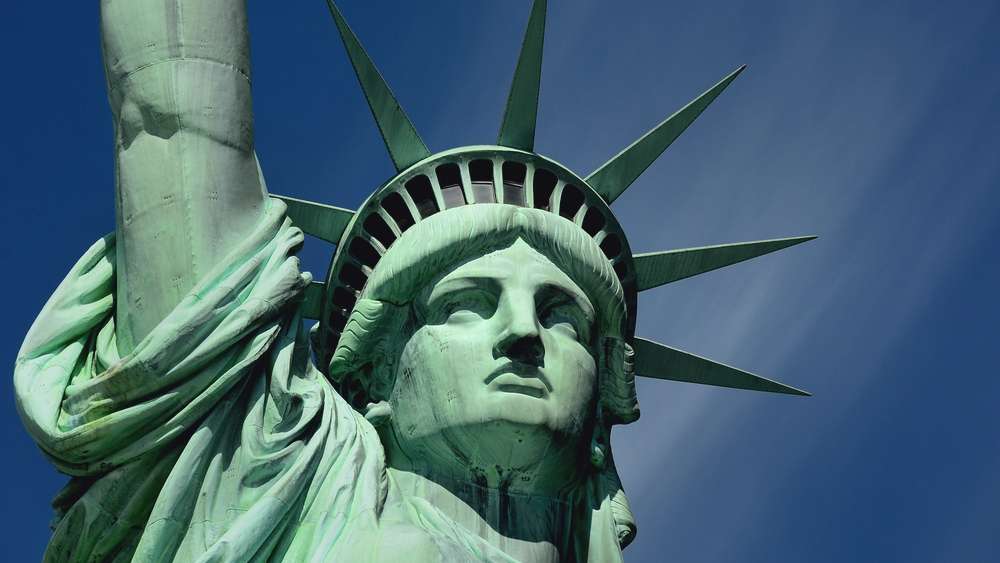 The face of the Statue of Liberty 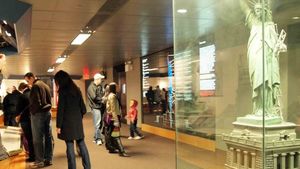 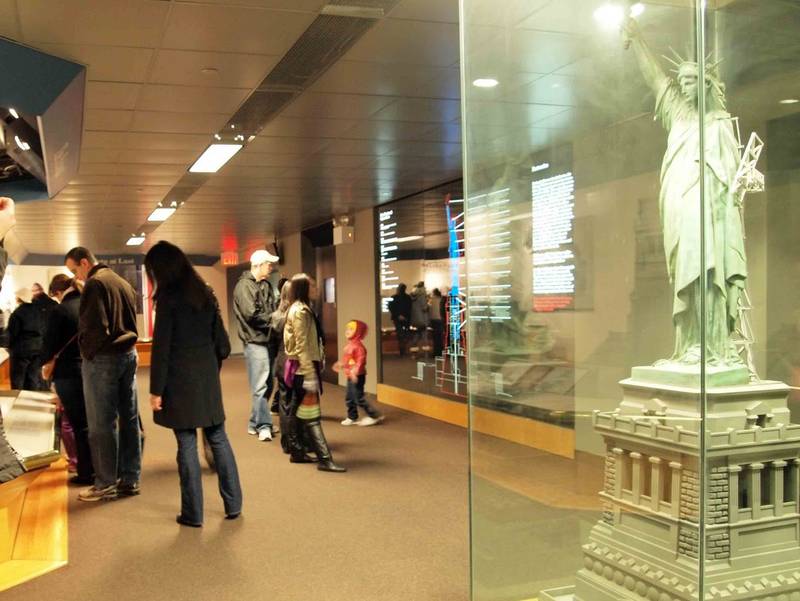 The great hall of the Museum of the Statue of Liberty

This is a fairly long room having windows on both of the other walls, with a succession of objects which separates it into two. It forms a sort of corridor through which the visitor. She is not very high ceiling, and the lighting is relatively low, which gives a - small - tightness. Photos of the construction in very large format is often presented at the bottom of windows, which gives a good idea of ​​the activity workshops during construction. These photos are the Albert Fernique, a photographer who took many pictures throughout the project, and gives a kind of report on the "making of" of the Statue of Liberty. These photos were sometimes published in newspapers of the time. Nowadays they are very useful in understanding the working conditions of workers. We are mainly sees Gaget workshops and Gauthier, in which were made parts of the statue, the statue during assembly and complete, always in workshops, then there more photos of the construction of the base, the mounting the statue on site, Isère (military frigate that carried the crates in New York), as well as some more recent photos successive renovations it has undergone. 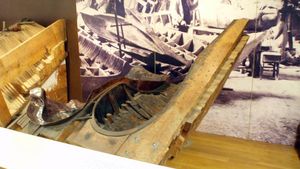 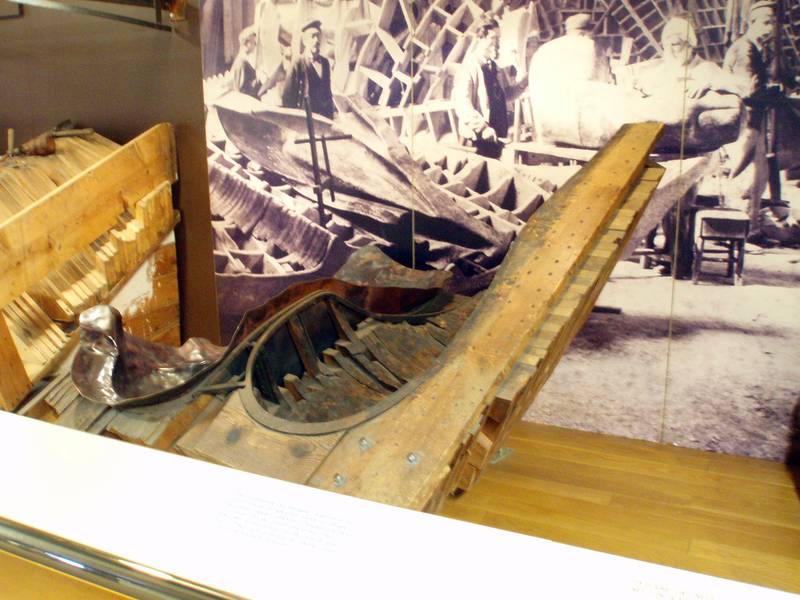 Construction tools of the statue of Liberty

In the showcases visitors will not see the tools used in the construction of the statue. These tools are original, they really served. There was first a copy of the base of the statue, with 5 toes. We see the plaster model that was used (that's probably the only recent item is a copy) On this model there are instruments can reproduce the shapes in a more solid material, wood . There is a form for the impression on the fourth toe. Next door, his reply copper result of the fingerprinting of plaster cast. The other element is introduced an ear. There is the wooden jig, solid, which was used for hammering copper plates, and right next presented the result of the hammering, the copper plate itself. We see that the template should be particularly strong, which is why we could not hammer directly on the plaster. It was made in joists and battens, and each element was a little late to be accurate work to the template itself. Hammering after, was only the end of the process and finally a small part of work to do. Everything else, it was the creation and verification of the template of the form that took time. The visitor will also see the hammers used for hammering, actually not so heavy wooden mallets it-it seems. 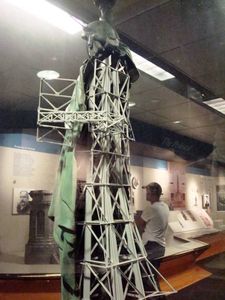 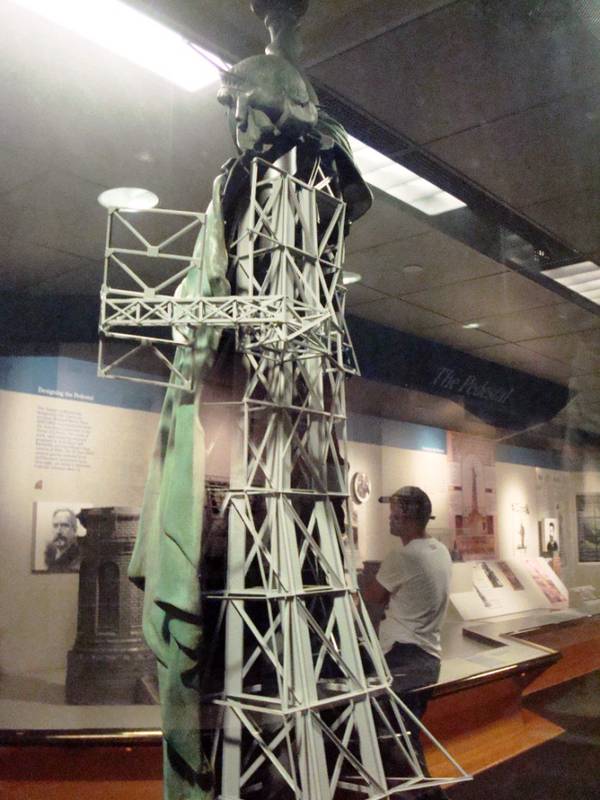 The main model is probably the major piece of the room. It measures in 2m50 and she is a faithful reproduction of the statue on its front. Its back is opened, the copper shell has been removed to show the internal structure of the statue. You can see the four main pillars connected by beams X. In the center we see the spiral staircase to double rotation that can go up and down at the same time without ever meeting. Such a system was conducted on Leonardo's plans at the Chateau de Chambord, France. This model is not copper, it is plastic. The other models are in various materials. There are wood, metal, etc. They vary in size from very small to the largest, the one we just described. All are faithful reproductions, they all have a story that is their own. They are presented before a reproduction of an engraving that was published in 1885 to magnify the statue in order to encourage people from the middle class in the United States to provide for the construction of the base, which dragged on financing . The room also contains a plan presented on a translucent plate, so that you can see both sides, with the different elements of the base of the statue and presented one by one.

Other type of model, the room has three base models that were considered for the statue. They are plastic and shows what might have been the pedestal. There is one who was chosen of course, but also a cylindrical pedestal, high enough, and another shaped like a truncated pyramid, a trapezoidal pedestal so. It's pretty fun to imagine them instead of the existing base. 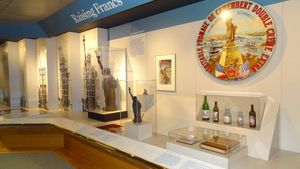 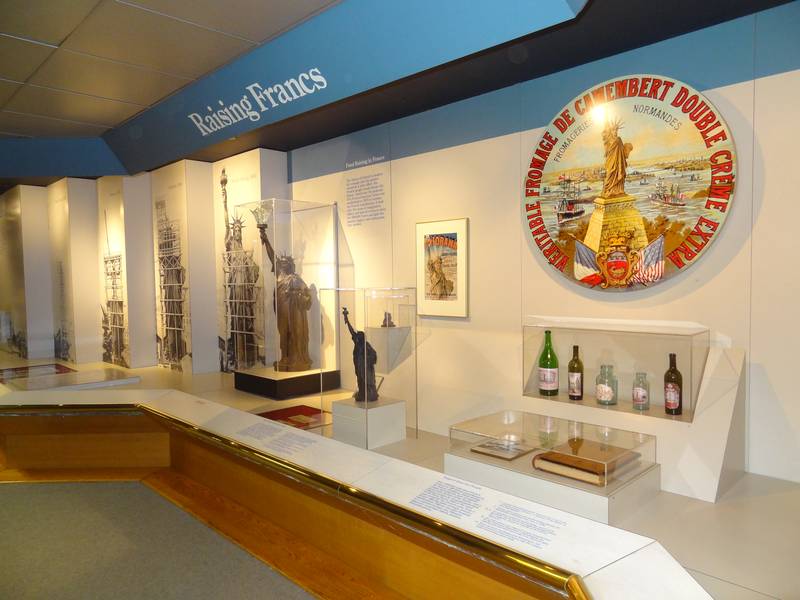 There are quite a few promotional items presented in the museum of the statue, in connection with the importance that they have had to finance the project. For if in France the financing was provided by both the population and the authorities, the US had to sell a lot of promotional items to ensure early funding. Much has been made by the gifts of the middle class, driven by a campaign "marketing" fairly aggressive for the period of which the spearhead was Joseph Pulitzer. But when it came to finding the first funds, the French sent to the Centennial Exhibition in Philadelphia, the first constructed elements: The head and the left arm, the one holding the torch. Thus these exposed portions statue attracted the public, and it was on this occasion many promotional items that were sold in bulk. Everyone wanted their photos or their small objects souvenir (and it seems, that is the origin of the word "Gadget", since the statue was made in the workshops "Gaget and Gauthier") Still, he aa relatively few of these exhibits. Clearly visible, a replica of a French Camembert box, bearing the image of the statue is exhibited alongside unsuccessful stone for the statue. 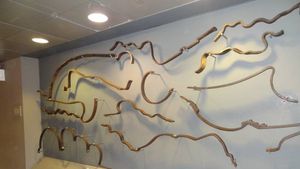 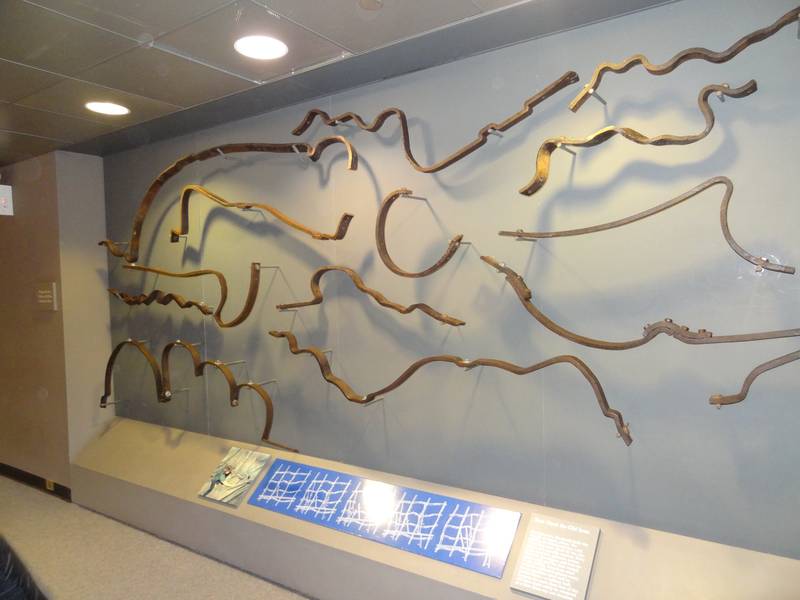 Fittings for holding the copper casing on the statue iron frame

The museum has many other things. For example, the picture below shows the metal parts against serving as liaison between the copper plates and architecture. These ancient coins, the system was completely redone during the 1984-1986 renovations, on the occasion of the centenary of the inauguration of the statue. There is also a large table showing the dimensions, reproductions good to finance the operation "arm Strengthening Freedom" (1951), etc.

The pedestal can be visited, it is part of the normal tour of the monument. It is a kind of huge hollow concrete cube in which a wide staircase (initially) takes the visitor on 7 levels. Some have an opening out onto a gazebo, a kind of outdoor balcony that offers a fantastic view of New York Bay. Obviously higher you go, the more views far door. The top floor can be quite windy, beware of the weather, especially in rainy day. However, there is no danger, it's just a little cold, winter days ... The rise in the pedestal begins at the platform of the strong wood, ie its roof. Besides just outside the museum the first step is to wander around the monument, nose in the air. From there, one hardly sees the statue, it is too close.

Once on the top floor were surprised to find a glass ceiling which gives a beautiful view of the inside of the statue. You can see the metal architecture that holds, it consists of four large pillars held together by a series of cross beams X. From this central part leave other beams that stop a few centimeters from the envelope copper. Sliding junction pieces provide attachment to one another, these parts having small insulating cushions. This brings two thoughts: First, the parts are sliding, which means that the statue is moving in the wind. Furthermore, the insulation prevents the creation of electric arcs at the junction, because it is a well-known phenomenon: When copper rubs iron, it produces electricity, especially when there a catalyst as strongly iodized sea air.

It is also the top floor of the monument begins the double staircase that leads to the rotations crown. This staircase is very narrow, low-ceilinged, and it expands when it gets that behind the face of the statue, where a small room can hold a dozen people. The view is beautiful from up there, it embraces the whole skyline of New York and Long Island and port activity.

To find out where to take the entrance tickets to the monument, business schedules, the conditions for access, simply see the "tours" of the site Click here to access it.

To discover the history of the construction of the base of the statue, Click here.


Photos of the museum

Here are some pictures of the Museum of the Statue of Liberty and its pedestal as the visitors can discover. There are also some pictures of boats, from inside the statue, the view at the top of the monument, etc.

The windows of the museum

Panels showing the mounting of the statue in Paris

The plaster mold of the foot

Replica of the face

Model of the internal structure

The great hall of the museum

A boat from the Statue Cruise

Inside the head of the Statue of Liberty