﻿ ﻿ Inauguration of the statue of Liberty

Inauguration of the statue of the Liberty

When the Statue of Liberty was devised at the very beginning of the project, we were in 1865. Edouard de Laboulaye, a Republican and pro-American law professor - it was he who proposed its construction - guessed that 11 years were enough for its construction and it could be opened on the centenary of American independence on July 4, 1876. This optimistic schedule was not kept, and between construction delays, shortages ways to finance the workers and equipment, and policy mistakes in both countries, the sculptor would have done better than 21 years to complete everything. If this delay seems important it is to be compared with other similar projects, which put all between 30 and 60 years to be realized. Achieving build such a statue in the United States, starting with France, all in 20 years was therefore already an achievement. But despite everything, the centennial passed without one way the inauguration of this statue.

The finished base, US officials could advance a definitive date. On July 4, 1886 would have been perfect, stack 110 years after independence, but unfortunately the base there was a delay that date was impossible to hold. He was chosen October 28, 1886.


The progress of the day 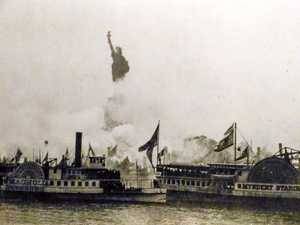 Inauguration of the statue of Liberty

Inauguration of the statue of Liberty 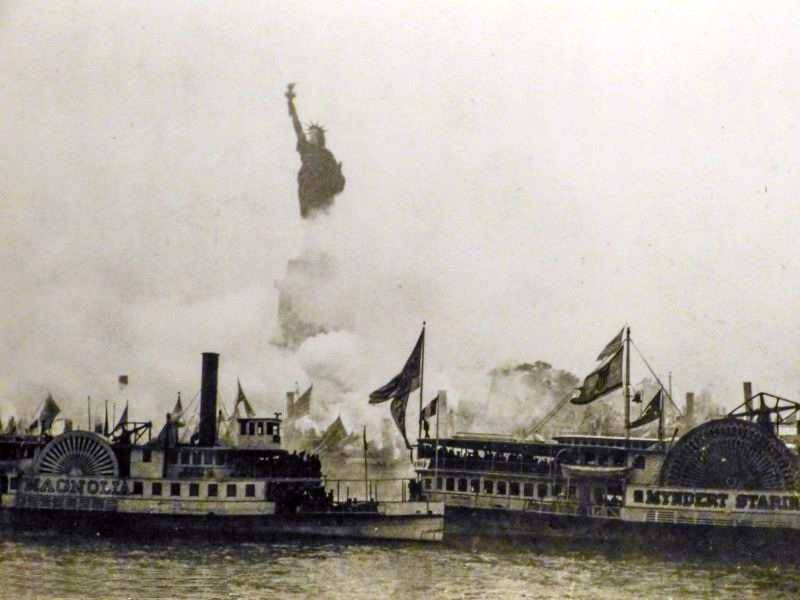 We October 28, 1886. This is a sad day, very cloudy, partly windy, with a low ceiling. Clearly, it's not nice. The statue stands on its base, a huge tricolor cloth mask her face. Officials are still on the ground, in Madison Garden. The President of the ceremony is the US President Cleveland. His presence was not obvious because a few months earlier he had vetoed state funding of the base, considering that the American people did not have to pay for a French gift (officially), but hoping by this gesture put in spoiled her political opponents, relatives of the association aimed to build the statue (informally). Cleveland had therefore not expected to inaugurate the statue, but finally solved it, understanding that this action would have an impact far greater than what he initially believed. And it is thanks to her presence that the statue holds a national radiation, because until now this project was not considered by US and local: New York erected a statue offered by the French, there was for them no connection between the statue and the United States. The presence of President swept the sensation and thus began the national destiny, and Miss Liberty International.

The New York Bay was covered with boats, most steam; a thick smoke unfolding in the sky. New York had decided that this day would be a holiday to allow people to participate. This appeal was heard, almost a million people participated in the ceremony. The day began with parades, processions of trades of the city. The population in turn arm waving American and French flags, all were in great joy. A Madison Garden parades were reviewed. After the parade ended, President Cleveland and officials went to the USS Despatch bordde, the official ship's president, who immediately took charge Bedloe's island. With him was the French Auguste Bartholdi, the sculptor, and Ferdinand de Lesseps, builder of the Panama Canal. There was also Mr. Chauncey LePew, the president of the Union League Club, the association which made things possible and was in constant contact with the association of friends of the United States, chaired by Edouard de Laboulaye. Speeches succeeded, and at one point decided earlier, Bartholdi left her companions and climbed to the statue's arm to lift the veil, which he did a little too early, the president is still in full discour. The surprise was great for the lucky ones who lived the moment and it is said that the vivas lasted a quarter of an hour before the President can not speak again. 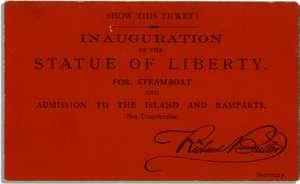 Ticket for the inauguration of the Statue of Liberty

Ticket for the inauguration of the Statue of Liberty 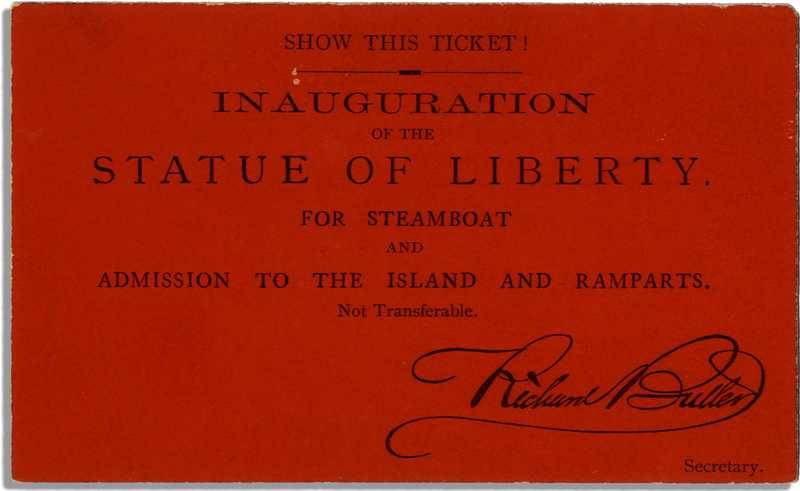 In the joy of the discovery of the statue, a controversy came to invite discour. It must be said that the late nineteenth century the United States was not as quiet as one might think. Symbol of Liberty, the statue was also widely criticized by the three communities, or at least three sets of people who found fault.

American society in the nineteenth century is quite open on women's rights, but that they have not yet voting pushed them to act that day to advance the discussions. The initiative came to the "Woman Suffrage Association", which as its name indicates campaigned for the right to vote feminine. They had noted that the 600 official guests to Bedloe's island, there were two women. A group of women went up on a small size of the vessel and managed to get close enough to the island to make their voices heard claiming aberration which involves erecting a freedom to feminine traits in a country where they have no political freedom.

But on the symbol of Liberty represented by a woman, each had its own interpretation: Some saw a typically European conservatism that belittled women, the other on the contrary noted that now it is a woman who symbolizes liberty and c 'was to give them a very great honor.

When Edouard de Laboulaye suggested building a statue in honor of liberty, slavery was still not abolished in the United States, it was in the year (1865). By cons, France had already abolished since 1845. During the 1865-1880 years, the black community was severely affected both by the white population of the United States, which did not treat them equal, but also by the legislator, which multiplied the laws reducing their rights. Between 1880 and the end of the century it was worse: Many blacks were lynched in a semblance of impunity and segregationist laws were actually enforced. The black community was therefore the margins of society and did not see the statue any symbol of Freedom, the notion seemed to them too inaccessible. The highlight, the Cleveland Gazette newspaper, led by an African-American who wrote this:

Let's push the statue of Bartholdi, torch and the rest in the ocean until the "freedom" in the country is such as to allow a colored man, industrious and harmless, living in the south, earn a decent living and that of her family, without being from Ku Klux Kan [...], possibly murdered, her wife and daughter outraged, and destroyed property. The idea of "freedom" of this country "illuminating the world" or even Patagonia, is quite ridiculous.

This ticket appeared in the Gazette a month after her inauguration. But the vast majority of black Americans did not make waves during the inauguration, they were content to ignore it, feeling little concerned by the statue.


The right of workers

From the middle of the century the United States gradually entered the era of industrialization, a little ahead of Europe. This era, which followed that of crafts, demanded a large amount of labor. The workers therefore found work in mass, but it has had an unintended consequence: Facing manpower shortages American leaders did enter their soil lot of immigrants from Europe, most of the poor from seeking good fortune. This phenomenon began in the 1870s and actually accelerated at the beginning of the century, but it was important enough in 1880 to cause a drop in wages, the number of workers being largely in favor of employers. Strike pickets fell into place, the trade union struggle erupted and 1886 was the worst year in terms of number of strikers and strikes. The inauguration of the Statue of Liberty could only be a claim pattern for those who felt bullied.

However, the opening day there were no special events on the subject. The statue was a symbol of Freedom, the workers took it over, but nothing much has been claimed that day.


See also: History of the statue of Liberty