Poem by Emma Lazarus on the statue of Liberty

The text of the poem

In the base of the Statue of Liberty, the visitor can read some verses written in English of course. This is the poem "The New Colossus" by Emma Lazarus. This plaque was added in 1903 on the base, she was not there at the inauguration.

Not like the brazen giant of Greek fame
With conquering limbs astride from land to land;
Here at our sea-washed, sunset gates shall stand
A mighty woman with a torch, whose flame
Is the imprisoned lightning, and her name
Mother of Exiles. From her beacon-hand
Glows world-wide welcome; her mild eyes command
The air-bridged harbor that twin cities frame,
"Keep, ancient lands, your storied pomp!" cries she
With silent lips. "Give me your tired, your poor,
Your huddled masses yearning to breathe free,
The wretched refuse of your teeming shore,
Send these, the homeless, tempest-tost to me,
I lift my lamp beside the golden door!

This poem, of great strength, begins to distance with its illustrious predecessor, the Colossus of Rhodes. It's quite amazing, given the justifiable pride that we could find such a comparison. But this rejection is essentially to highlight the difference in position: The Colossus of Rhodes is invariably represented in Walker, or at least your legs apart, while the Statue of Liberty has a fixed position, straight. She does not move, the only movements are those of her garment. 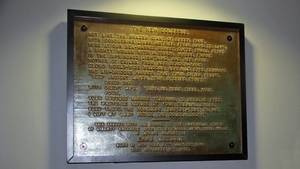 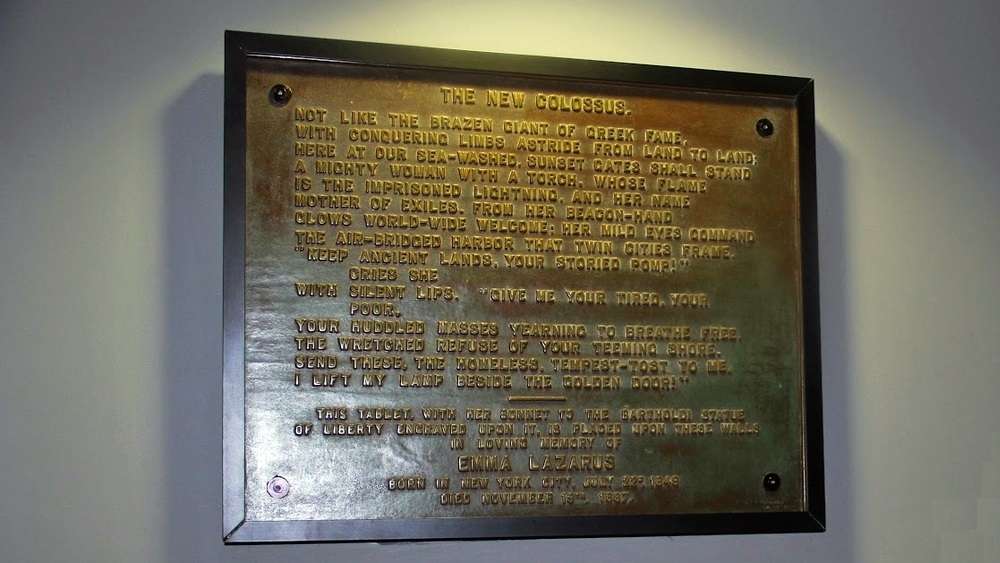 Plate containing the verses of Emma Lazarus, in the base of the Statue of Liberty

Trapped flash refers to the light of the torch. Today symbolic, it was real time Emma Lazarus because at the beginning of the life of the statue she was flagship office, with a true guard, to guide ships on the port of New York. It seems that the brightness of the light to 39Kms saw himself around. This feature disappeared in 1916.

The inscription "Mother of Exiles" is closer to the end of the Emma Lazarus poem highlights the poor mass crowds coming to the United States seeking a better life. It forces the feature to magnify the statue belittling men who hope in it. There is a reference to freedom in the poem is the only one. ("... Aspiring to live free" ...) It is a sign that the statue, for the author, is less important as a symbol of freedom that as a goal for emigrants. There may be behind these few verses quite visible political significance. Indeed, in the early twentieth century the United States was a major country of immigration, European populations were traveling en masse on site, not just like Emma Lazarus said, the poor, the underprivileged.

Finally there is another factor to be taken into account in this poem is the magnificence of New York, which is seen as a twin city connected by rope bridges (recently built), the symbol of American genius. The light above the golden door is a final reminder of the greatness of the host country for migrants. Again the purpose of the poem is to sit the greatness of the United States. A beautiful job ... who would have more weight if the statue had been American ...