﻿ ﻿ Narrative of a visit to the statue of Liberty

Narrative of a visit

The text tells how was the visit to the Statue of Liberty on a beautiful summer day. 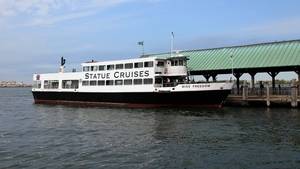 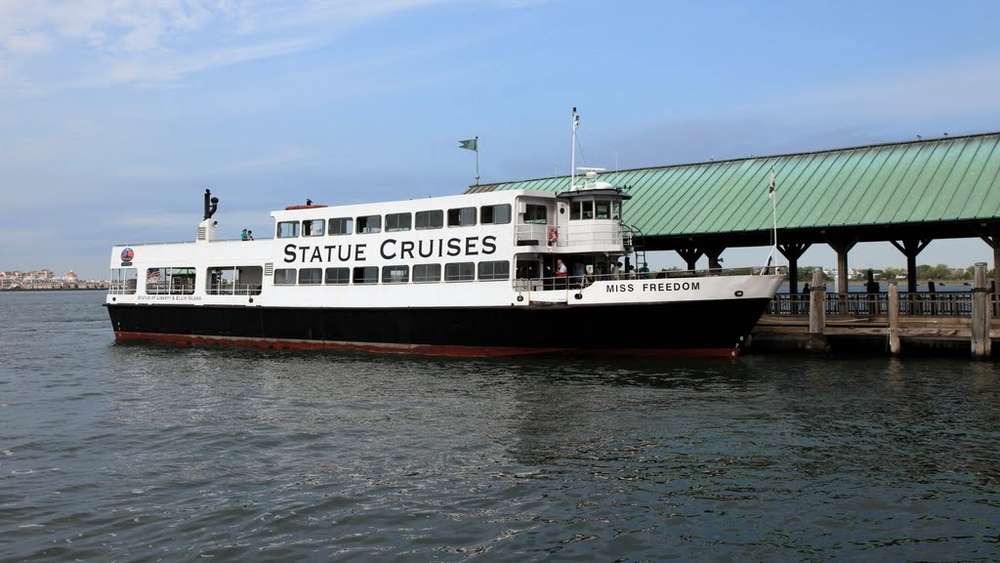 One of the ships of the Statue Cruise, docked

A few days ago we are in New York. We are in July, the weather is looking good since the beginning of our stay. Foreseeing I bought on the website of the "Statue Cruise" our tickets for the crown of the Statue of Liberty, and that for already 3 months. I did well, because two weeks later there was already no room during the time we were there. A little more and we did not come up there. See you in the morning, at 8:30 am, in Battery Park. Or half an hour before departure of the first boat. We rub our hands, presumably it will be in the first, it should not be too crowded.

We leave the hotel with a slight delay, the metro leads to central park, where we follow, in Battery Park, directly. A good half hour is going well, as we took a margin, one arrives on time. And then, surprise: The tail is already formed, and particularly long. Wanted our desk, it is found and wait our turn. The passage is actually quite fast. Therefore pass into the second queue, the security. There, it's not kidding. Everything is controlled by bag. Some people get angry and do not speed things up. It gets excited too, because the clock is ticking and you do not want to risk losing our place for the rise in the crown because of the wait. Finally another control window opens before us, the queue is shrinking at unbelievable speed A good point for them, efficiency is at the rendezvous. Begins the third queue, on the dock this time, just before boarding the boat. This happens quickly, and organizers set off the ceremony. It feels the regulars, but not jaded. Maybe they are paid on commission on sales made in the boats, because they spend their time trying to sell us hotdogs, hamburgers and other soft drinks. Early in the morning we reject all the requests, which is not the case of many US that is seen sweating profusely under the July sun. Especially those slightly stronger, with white skin of the Northern States. We smiled gently, we who are in the South of France.

From the outset we turn a little into the boat, big enough to ride it. To the left was the view of Ellis Island, which avoids far enough. Liberty Island is fast approaching. The Statue of Liberty is becoming more and more important in the field of view. It draws the eye inevitably. It is truly impressive.

As soon as the boat docks passengers can get off. Those who wait to go up we are friendly smiles. Where they go, since we took the first boat? Out the first one walks briskly, following the signs. This too makes us smile: With 225 tons of copper before us, one suspects that the wide pedestrian path that opens us leads to the statue. We then enter the fort, not quite in the first has since been overtaken by Dutch with an outfit that is more akin to the race walk at tourism. You are met by effective guards who draw us into the fort. Not much to see, if not the impressive statue above our head. Finally one enters the museum. The tour begins with the hall of the torch, quite impressive. It is on two levels, one can go around the 1st floor along with a balcony. Then slip on some larger or smaller rooms giving a lot of explanations on the construction of the tower, how it was decided, directed, where do the funds. There are many photos, and a lot of gadgets have been made at the time to participate in its funding. We also see some pictures of her inauguration, and technical explanations. 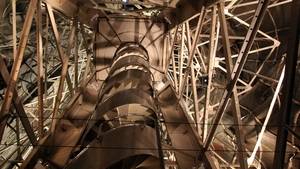 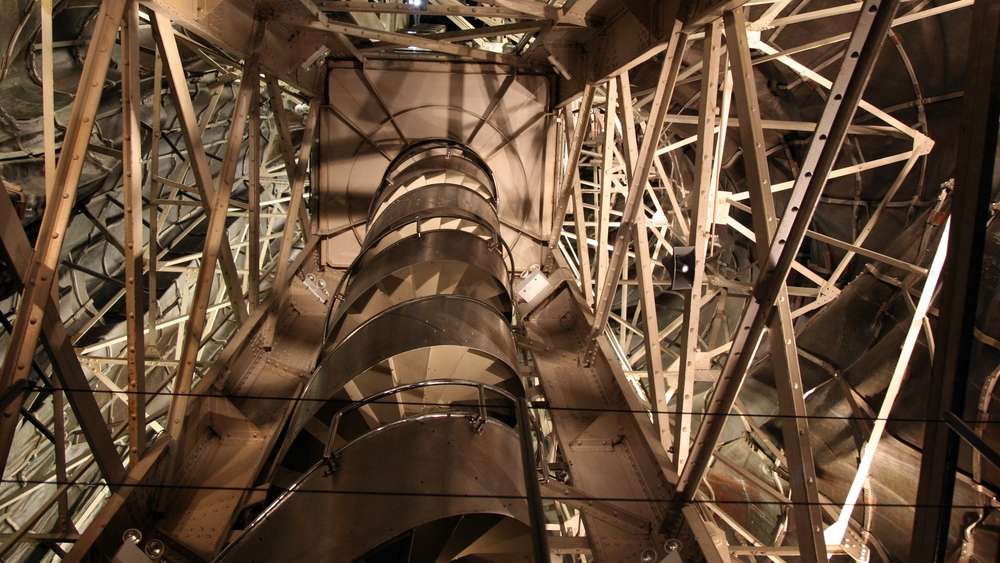 View the structure of the statue, and her narrow staircase

Then comes the rise in the statue itself. Printing is striking: The view is lost on steel beams (those iron were replaced in 1986), with the narrow stairs, spiral, climbing, climbing ... We panicked a little : It will really have to climb up there? Moreover it will be time to climb. Immunized by successive expectations, it is present in advance of counter mounted with tickets. The guard made us take precedence, and we are left to pass the Dutch who gratify us a little smile. It is not clear, but we do not seek to understand. The climb ... The first steps are easy. After 10 minutes, fatigue is felt. The staircase has steel walls that prevent pass over the ramp. At the security point of view, it's well thought out, but we still have a feeling of suffocation. A bit of courage. One hears less hubbub bottom, it seems that the sound is attenuated. Strange with such a sounding board. The higher up, the more idle. Other visitors come behind us, they are faster, but arrived at our level they do not try to double. Probably tired too, and anyway we approach the summit. Bizarre, but tumbles directly into the head of the statue. There are people, though not as lis. We must bow her head as he entered the small room. 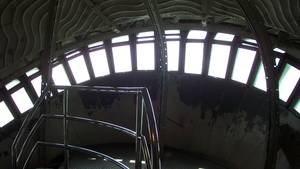 The interior of the head

The interior of the head 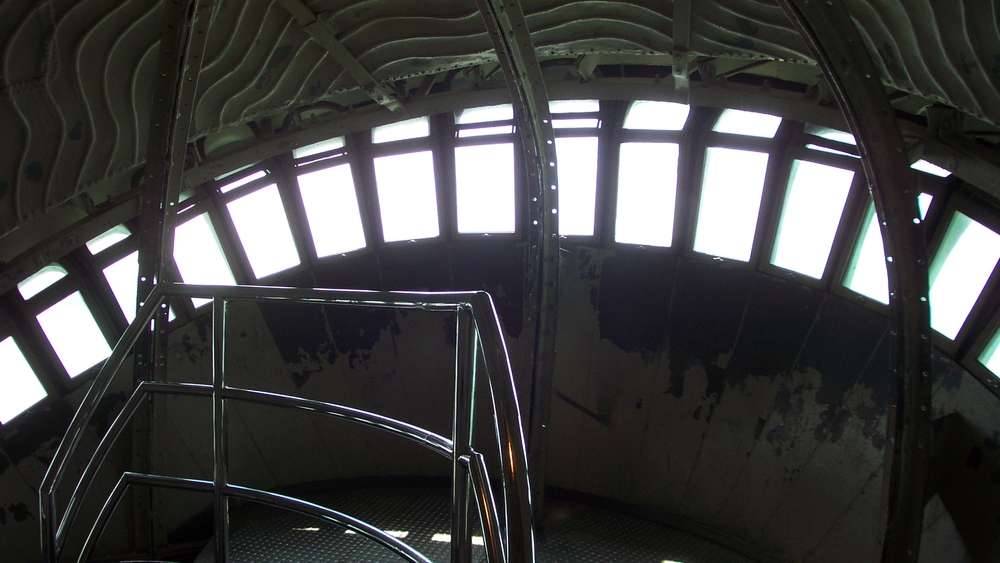 The head of the statue and its many windows

It seeps through the visitors and discover a vast expanse of water. The city is far away, but ultimately not that much, we can see the skyline. The Violence of the July sun reduces contrasts, the city seems in a halo of light. We enjoyed the view, saying that ultimately it was worth it to go up so high. The world happens, people around, and we must get to the evidence, we will not stay here all day. After a last look at the city, we go back down. It is long, very long. At the bottom, do as everyone, you push a sigh of relief. The guard smiles, it is the first to Liberty Island.

We still spend some time there and we decided it was time to continue the visit. Surprise, it is already 13h, we had damn hanging inside. We buy "Liberty Burger" (yes) and eaten while walking on the footpath that circles the island. See you at the pier and naturally we start queuing on the dock in the direction of Ellis Island. The sun beats down, one is swimming. Fortunately, the pontoon is covered with a white sheet, it's a very foolish. The boat arrives rapidly, the docking maneuver is repeated, visitors ascend and we rush in domestic seats, the sun is really too strong for us. Some red-crayfish people remain in the sun. I bet that before the end of the day they go to the pharmacy to take the equivalent of Biafine ...

The boat docked at Ellis Island. This time is pressed not to enter the museum, the island is not specially visited. We enter a large room hall kind of station, via a beautiful canopy hot iron. The room is very beautiful. American flags recall the importance of this place to them. We understand them. The discovery explanatory panels is done without enthusiasm, it lacks a little something playful. Panels, photos, texts, we had it since the beginning of the day. There is a little time remains and leaves, pretty tired it must be said. Re-waiting on the platform, always safe. Re-boarding, then deposits in Battery Park. During the journey we take a last look at the Statue of Liberty, which seems to say goodbye. We feel something disturbing idea that will not see again anytime soon.

Two days later the memory of that visit was impregnated permanently in my head. It is not about to get out. It really was a beautiful day, tiring but beautiful.