﻿ ﻿ The Forbidden city of Beijing

The Forbidden city of Beijing

The Forbidden City is the common name of the Chinese emperors' palace of the Ming and Qing dynasty, which ruled China from the 15th century until the beginning of the 20th century. 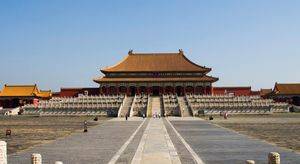 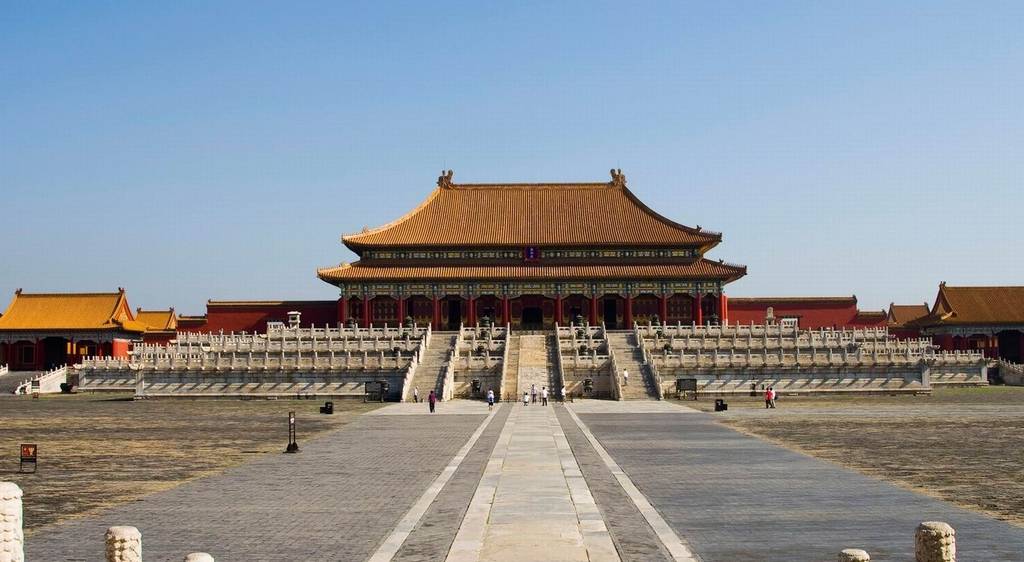 The Forbidden City, now known as the Palace Museum, was the imperial palace of two Chinese dynasties, the Ming and the Qing. Located in the center of Beijing, it was built between 1406 and 1420 and served to 24 Chinese emperors, until 1911. Currently it is a museum presenting artistic and cultural treasures of Chinese history. At the same time luxurious and magnificent, the Forbidden City is considered as one of the five great palaces of the world, with the Palace of Versailles (France), the Palace of Buckingham (Great Britain), the White House (United States) and the Kremlin (Russia). It was classified by UNESCO as a World Cultural Heritage Site in 1987.

Measuring 750 meters from East to West and 960 from North to South, the Forbidden City covers 720,000 square meters, it is the largest palatial complex in the ancient world and China's most complete existing architectural group. The legend says that it has 9999 pieces, but the reality is quite different, in fact it counts only a little more than 8700. It is necessary to know that 10000 is the number of the Gods, corresponding to infinity, it was therefore not conceivable to create a palace with more than 9999 rooms ... hence this legend.


A museum of one million works of art exhibited

Nowadays the Forbidden City is a museum called the "Museum of the Palace". ("Gugong Bówùyuàn") The Chinese prefer the name "old palace", which better corresponds to their history. It is interesting mainly for its buildings, whose state of conservation and restoration are exemplary. Squares, passages, gardens and walls are just as interesting as the places of life themselves. This museum, however, contains pieces of many important Chinese works of art, such as lacquer, bronze, paintings, but also elements of the imperial family, sometimes very old. The whole is particularly interesting but requires a certain time of visit, time that is rarely compatible with the visits organized for the Westerners on the spot.

One million works of art are said to be visible in the museum, which is difficult to verify ...

Learn more about the collections of the museum.

Its official name is "The Forbidden Purple City". Purple refers to the polar star, considered in the Chinese imagination as the "small purple star". This star being in the axis of the Earth, it seems never to move and has been considered the center of the World. As the emperor was also considered at the center of everything, the two notions were joined together and the palace where the emperor lived was therefore associated with the purple color. This is also the reason for the color of the buildings, supposedly purple (and that is, in reality, red).

The Chinese call this monument "The ancient palace", referring to the ancient times during which it was occupied. But most of the time, in Europe, we call it "The Forbidden City" because it was forbidden to enter, approach, or even look at it!

Lear more about the appellations of the forbidden city.

When the new Emperor Yongle decided to build a new palace in Peking, he had a certain number of requirements linked to the Chinese traditions. The name was chosen according to astronomical elements. The new imperial palace being the center of power, it had to bear the name of the central star in the sky. This star is known in the west as the "polar star", but in China it is "the small violet star" ("Ziwei Xing", in Chinese). The palace was called "the purple city". His name forbidden city came later, the adjective referring to the fact that no one could enter the palace except the imperial family and servants.

Another symbol, in the Chinese traditions, the number 10 000 represents the infinite, and the 9 is a symbol of longevity. The palace received 9999 pieces, figures intended to ensure a long life to the emperor while approaching the maximum number of rooms that could contain a palace made by men. (10,000 being the limit, after only the Gods could make palaces with more coins)

Learn more about symbols of the forbidden city.


Life in the palace at feudal times

When visitors discover this magnificent complex, no one can imagine the dismay of the members of the imperial family who lived in these premises. Disarray is the word because although considered as gods, they never had to leave the palace except with rare exceptions. The nearer the Emperor was, the more strict this restriction was, even to the Emperor himself, almost assigned to this palace for the rest of his life. The forbidden city was therefore a prison, gilded prison, but a prison anyway.

On the other hand, for the eunuchs who were assigned to the daily tasks in relation to the royal family, they were among the few people to share them on a daily basis. Their lives were relatively interesting because, apart from their states of eunuchs, they benefited from many advantages related to overconsumption of the imperial family. As an example, it must be known that the Emperor never wore the same dress two days, the latter was for single use. The eunuchs could retrieve these outfits and resell them, which made them rich. There were of course many confrontations between eunuchs, who lived in a sometimes very heavy atmosphere. But this status was still sought because the operation of removing the testicles succeeded in 90% of the cases (10% mortality, anyway) and ensured an enviable life.

The servants of the palace were members of the common people who enjoyed the privilege of working within the walls of the palace. Being able to circulate as close as possible to the power, they soon enjoyed greater consideration among all the Chinese. Moreover, they had, like the eunuchs, certain advantages connected with their functions.

During the five centuries of its use the forbidden city was perceived as a sacred place. In this capacity no one but the emperor and his court had the right to enter. Approaching it significantly was strictly forbidden, and even a glance at these high walls could be reprehensible.

Lear more about the life of an emperor into the forbidden city.


Origin of the forbidden city

The Middle Kingdom has not always been ruled by Chinese emperors. In the thirteenth century most of the present-day China is dominated by the Mongols, who set up an administration mainly controlled by the Persians, the Syrians and the Turks. The present capital is then designated as the city of the Great Khan (Khânbalikâ). The Mongol empire is experiencing rapid growth but is very soon confronted with uprisings of the Chinese. The Mongol power collapsed and a Chinese dynasty, the Ming (word meaning "clear", "brilliant", "resplendent") took its place. She soon undertook to shave the palace of the great Khan to replace it with buildings inspired by the purest tradition of Han and Tan dynasties.

Learn more about the history of the forbidden city.


Architecture of the forbidden city

Chinese memories do not need massive castles with high walls to demonstrate their powers: They prefer generous surfaces with low constructions arranged square to symbolize the Earth - indeed, in the Chinese genesis, the Earth is a slice of square shape. The planning of this extraordinary site, around which the rest of the city must organize, demonstrates the intentions of the powerful, highlighting the Middle, the fifth cardinal point and the most important. Even though Beijing is not the geographical center of the Empire, the capital is the symbolic center, in the center of which stands this city, the heart of the Empire and power.

The main buildings are located on a perfectly north-south axis, with a parade avenue which once crossed the whole city and connected the gates. Other buildings are organized in groups of two on either side of the axis or along parallel axes. The large courtyards used for ceremonies and receptions are to the south in the public part of the city, while the residential palaces are situated in the north. This layout of the buildings echoes the Chinese representation of Feng Shui which advocates that man and his home fits between wind and water. That is why the buildings must be protected to the north and open to the light and heat to the south. In the imperial city these conditions are fulfilled, since in the north and west the city is protected from the winds coming from the Gobi desert, while it can open to the south and the east on a plain.

The city is also defended in the North by an artificial hill built from the earth removed to dig the moat. This hill is called in popular language "The Coal Hill", because it is there that the essential fuels are stored in the palace. The different buildings do not strike by their height but rather by their width and their gathered appearance. All stand on imposing stone pedestals that can be as large as 8 meters wide for the reception pavilions and provide a good insulation of the soil moisture for wooden buildings. From these stone bases stretch powerful columns cut in a very hard wood, the nanmu, transported for this purpose by channels from the South of China. These columns support very massive roofs covered with varnished clay tiles. The colors were to be decreed by the emperor: In the palace, it is the yellow, imperial color par excellence.

The reception buildings are topped by two-tiered roofs, which seem very light and elegant despite their height on two floors and their impressive size. This effect is obtained thanks to the presence at the four corners of the building of a particular wooden framework that springs to the assault of the sky. It is populated with fabulous beings in glazed earth that are supposed to protect the City and its inhabitants from all dangers - not just Mongols.

Learn more about the architecture of the forbidden city.