﻿ ﻿ The Chakri Dynasty: Rama I

The founder of the Chakri Dynasty

Rama I was the first king of the Chakri Dynasty, the dynasty ruling the kingdom of Rattanakosin, Siam and later the Republic of Thailand. His descendants are still on the throne now.

The founder of the Chakri dynasty is known by many names, especially Phra Phutthayotja Chulalok. His birth name was Thongduang, and Rama I was his reign name. He was born March 20, 1737 of a family of notable, in the kingdom of Ayutthaya, the kingdom preceding that of Siam. His father was a noble of the royal court, he was in charge of the royal secretariat of northern Siam. His mother had distant Chinese origins. The couple had several children, 7 in total. 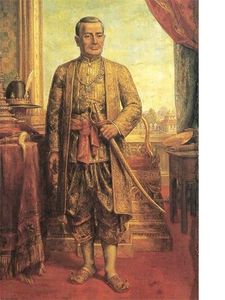 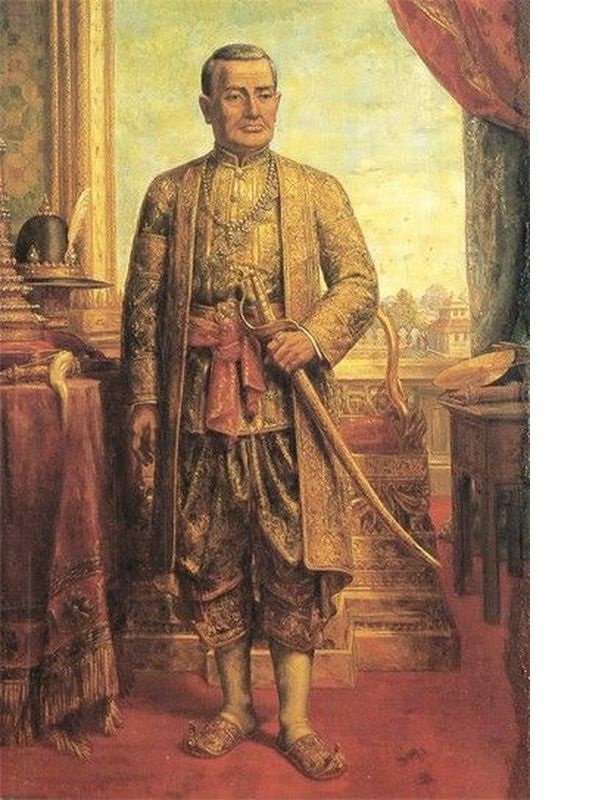 The young Thongduang was brought up inside the royal palace. One of his closest friends was the king's son, Taksin, with whom he will maintain good relations for a long time. His official function, in the palace, was page of the king. In 1757 he became a monk as tradition had it, but it was not a vocation and he quickly abandoned this state and returned to the court. The following year he was appointed deputy governor of Ratchaburi province.


The kingdom of Thonburi

In 1767 the kingdom of Ayutthaya was about to disappear. Attacked by the Burmese, the capital was under siege. The king's son decided to leave the city and settle further west in the town of Thonburi. He was followed by Thongduang who had remained faithful to him and thus brought the administration of the province of Ratchaburi. Also in 1767 Ayutthaya falls and was destroyed, burned and looted. The Burmese, winners, established a regime of governance fragmented by the various warlords who participated in the war. But during this time, Taksin crowned himself King of Thonburi, creating an ephemeral kingdom that can be described as a "kingdom of resistance" to the Burmese invader. Thonduang was appointed chief of the royal police under the title of Phra Ratcharin and in 1769 he organized a military campaign against the Burmese Lord Fang, whom he defeated. He was appointed minister of the northern provinces and was the general-in-chief of the army during the conquests against the Burmese, then against the Cambodians (1778). He also conquered the Lao kingdom (now Laos) the same year.

In 1781 the kingdom of Thonburi falters: A rebellion that is due to Phra Sun threatened to bring down the power, Taksin himself had lost his position as king, the government was suspended. The following year, in 1782, Thongduang returned to Thonburi with his armies to quell the rebellion, which he managed to do. But instead of returning power to Taksin, he had him executed and took his place, founding the kingdom of Siam. Thus began the Chakri dynasty which is still the reigning dynasty in Thailand, despite the fact that the country moved from the Kingdom of Siam to the Constitutional Republic of Thailand in the 1930s.

One of the king's first decisions, apart from taking Rama's name as reign, was to create a new capital further to the east. The idea was not only to define a strategic location better able to have a good defense, but also to make a clean sweep of the past, as well of the period of the kingdom of Ayutthaya as that of the kingdom of Thonburi. Its new capital was called Rattanakosin, which means "Place where the Emerald Buddha is kept". And indeed he built a palace with a Buddhist temple in which was placed the famous Emerald Buddha, symbol of Thai royalty. Of course this city is still the capital of Thailand, it is nowadays called Bangkok.

Between 1784 and 1785 took place the Battle of Rach Gam-Xoai Mut. It was a battle that took place in the Mekong Delta and involved an alliance between the naval forces of Siam and those of warlord Nguyen against the Vietnamese. On Nguyen's wish, the provision of military aid for a war outside the territory of Siam indicates the will of Rama I to extend his power to more distant horizons. Alas, his fleet was lost, just like the battle. But beyond the military conquest what was important for Rama I was the spread of Thai culture, way of life and a more general point of view of the power of the Kingdom of Siam. Thus when the young king of Cambodia, former prince Ang-Eng, ascended the throne in place of his father deposed in 1779, Rama I had him captured. The idea was not to conquer Cambodia militarily but to bring his ruler to Bangkok to raise him as his son. Once an adult, he was supposed to spread Thai culture in his country, which was already done before by the imposition of a Thai governor on Cambodia. When he reached adulthood in 1794, Ang-Eng was indeed sent back to his country as king, but it was actually a puppet administration, unable to make his own decisions and still under the of the Siam Empire.

If the Thai influence was able to spread peacefully in Cambodia, it was not the same for Burma. Indeed the Burmese, great territorial adversaries, launched an attack on the north of Siam between 1785 and 1786, this is what was called the war of the nine armies because the Burmese presented themselves as well. The forces of Siam struggled hard but could withstand long enough to allow the Bangkok armies to arrive. On their arrival they found that the city of Lampang was in siege and the governor captured. It was Rama I himself who directed the fighting, and whether it had an influence or not, the result was that his troops were able to retake the city. He ordered a counter-attack from the South, an area that had been under Burmese attack almost at the same time (Ranong, Nakhon Si Thammarat). The island of Phuket had also been conquered following the death of the local governor, but it was quickly resumed by the troops of Rama I.

This two-year war was followed by another, much shorter one between Siam and the Burmese. There, too, the Burmese who had been able to capture Tha Din Daeng were quickly thrown out of their country. This episode in the history of both countries is named the Tha Din Daeng campaign.

Rama I died on September 7, 1809 following a brief and intense illness.

King Rama I was prolific. In 1760 he married Nak, daughter of a protector of the town of Samut Sakorn, and had a total of 42 children, of course different mothers. The successor of Rama I on the throne of the kingdom of Siam was the son he had with the queen, Prince Isarasundhorn, who later reigned under the name of Rama II.

From a general point of view the reign of Rama I is characterized by the consolidation of the territory that was once the kingdom of Ayutthaya within a new kingdom, that of Siam, whose security it organized through many conflicts with his neighbors. He extended Thai culture to neighboring territories, particularly Cambodia, Vietnam and Laos, and developed the culture of his people through the building of many temples and the prominence of popular writings. On this subject he is at the origin of the writing, or perhaps just the compilation, of ancient legendary texts tracing the history of the kingdom. This text known as Ramakian is what is called the national narrative of the country, it is particularly known in the country for being beautifully put in pictures through a painted mural that can be seen inside. of the Temple of the Emerald Buddha.

The whole of his work allowed the emergence of a solid dynasty on which the present-day Thailand still leans, the Chakri dynasty.