The Imperial State Crown is the main crown of the British monarchy. There are two other well-known ones, the crown of St. Edward (the most sympathetic) and the imperial crown of India (which was worn only once). These three crowns can be seen at the Tower of London, in the Hall of Jewels of the Crown. 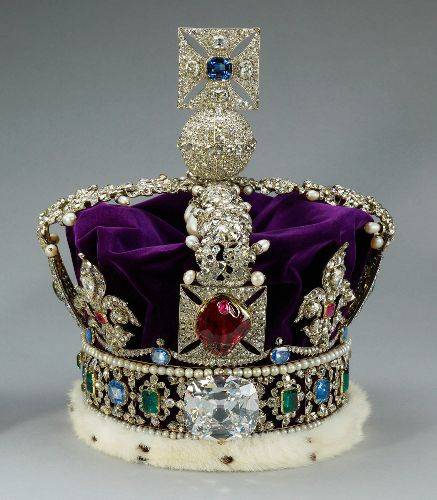 
The jewels of this crown

This inestimable crown contains 2,783 diamonds, 17 sapphires, 277 pearls, 11, emeralds and 5 rubies. It's still a lot for one piece of jewelery!


The sapphire of Edward the Confessor

The Imperial Crown of Ceremony contains a number of jewels that have had a long, sometimes dramatic history. Some were recovered at the time of the restoration, for example the sapphire of Edward the Confessor, which is at the center of the Maltese cross at the top of the crown. This sapphire was part of a ring belonging to Edward the Confessor, a ring that was buried with him in 1066. In 1101, when his sanctuary was opened and the ring was removed, the sapphire was placed in a crown worn by Henry I.

The Ruby of the Black Prince

The ruby ​​that adorns the center of the crown of ceremony has a rich and dramatic history. It belonged formerly to drunk Sa'id, king of Granada, assassinated by Peter the Cruel, king of Castile.

At that time the domination of Castilian Spain was centralized in Seville and the Moorish kingdom of Granada was systematically attacked and gradually returned under Spanish domination within the framework of the Christian Reconquest of Spain. According to historical accounts, Abu Sa'id wished to go to Don Pedro, but the conditions he proposed were unclear. Don Pedro welcomed his visit to Seville and when the two men met Don Pedro of the servants of Abu Sai'd were killed, then Abu Sai'd himself was assassinated. In searching for Said's body, the ruby ​​was found and taken by Don Pedro.

Peter the Cruel offered it to Edward, the Black Prince, in recognition of his military aid during the Battle of Navaretto in 1367. He was inherited by Edward's son, Richard II. Richard had it in his possession when he surrendered to his cousin, the future Henry IV, in Flint, Wales in 1399. Henry then usurped the throne and Richard was assassinated. Henry's son Henry V possessed this ruby ​​in the crown he wore around his helmet at the battle of Agincourt. The ruby ​​was also set in the crown of Richard III at the Battle of Bosworth in 1485. When Richard was killed in combat, the ruby ​​rolled under a mill before being recovered by Lord Stanley. The latter placed it on the head of the victorious Henry Tudor.

The imperial imperial crown also contains pearls that were worn in earrings by Elizabeth I, and hung on the arches of the crown.

The diamond "Star of Africa"

Within the large inlaid jewelery group that forms the base of the State Crown is an enormous diamond named Second Star of Africa. It was cut from the famous diamond Cullinan, the largest diamond ever mined, then given to Edward VII who placed it in the crown.

The Stewart Sapphire (Saphir Stewart, in French) belonged to the Royal House of Scotland for centuries. It was offered to George III. The original owner of the sapphire was King Alexander II of Scotland, he had placed it on his crown for his crowning in 1214. Edward I of England took the sapphire with the stone of Scone in 1296, during his invasion of 'Scotland. His grandson, King Edward III, later returned the jewel to his brother-in-law David II of Scotland. King David II offered the sapphire to his sister, Marjorie Bruce. Marjorie, who married Walter Stewart, had a son, Robert II, the first monarch of Stewart's House. But on the accession of James I and James VI, the sapphire was again returned to England.

Oliver Cromwell sold this stone with the rest of the British Crown jewels during Interreigne. After the Restoration the sapphire returned to Charles II. The sapphire was recorded as part of the relics of Stewart taken by James II during his exile in France when he fled the country at the time of the invasion of William of Orange. After James's death, the stone passed to his son, James Francis Edward Stuart, the "Old Pretender", who gave it to his second son, Henry Benedict, Cardinal York.

In 1838, young Queen Victoria put the jewelry in the new Imperial Crown, in front, under the Ruby of the Black Prince. When George VI made a new crown (almost identical to the old one), the sapphire Stewart was placed there. When acquiring the Cullinan diamonds, the sapphire was moved to the back of the crown to create space for the Cullinan II cushion-shaped.