The tower of London is a medieval ensemble of the city of London. It is a particularly well-preserved 11th-century fortress that is the pride of the Londoners, and beyond, of all the British. They call it "Tower of London", of course. This fortress is located in the heart of London on the banks of the River Thames on the north shore. It forms a tourist complex with the well-known Tower Bridge which is this famous rocking bridge of the capital of the United Kingdom. 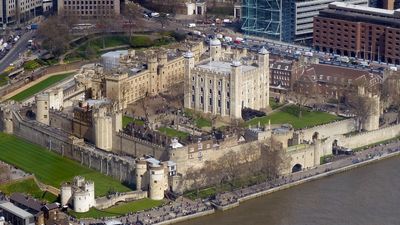 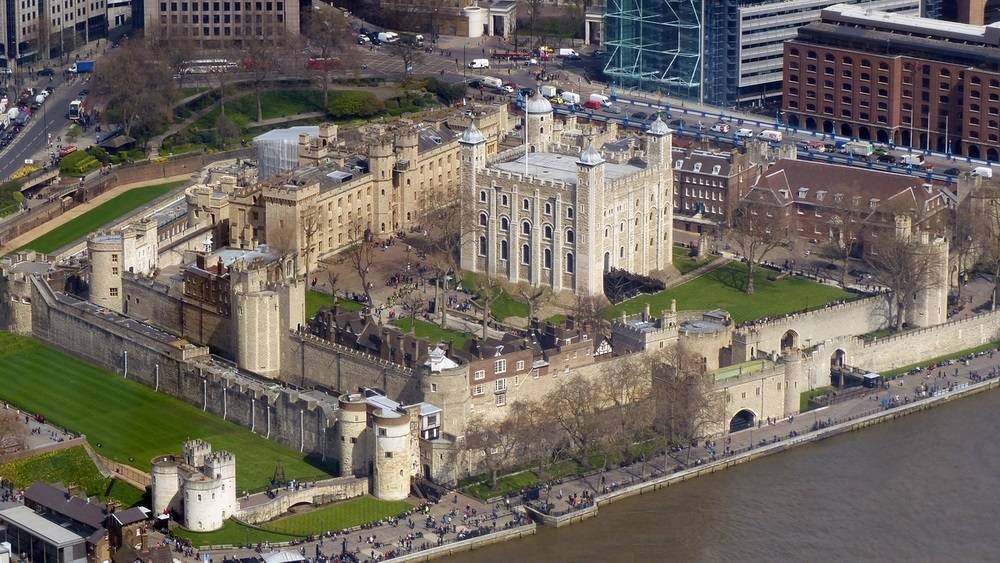 Aerial view of the Tower of London, one of the main monuments of the British capital

The Tower of London consists of a group of buildings surrounding the main tower, the White Tower, all protected by two rows of ramparts plus a dried moat. Inside there were royal dwellings, but also a barracks, guard rooms, defensive towers, and so on. Nowadays two buildings are of great interest to tourists: The barracks have been converted into exhibition halls for crown jewels, and the white tower, which contains museum pieces of great interest.

The Tower of London has a national and international influence as far as it is known as a representation of the British power in the World. It is especially known to the British themselves as the source of the independence of the nation, since this fortress was at the same time the lock of the Thames, hence of trade, and the London padlock, taken under resistance of these ramparts. Thus endowed with economic and military strength, the supporters of the fortress of London were the masters of England and, over time, of the entire British Empire.

This website allows you to discover the Tower of London with, for example, its location, photos, plan, etc. But you will also find its description, building by building, as well as its history and a record on how to visit it. There are also a lot of other things to read, you will see them on the site map.

The Tower of London is the official royal palace of Her Majesty the Queen of England, although the last sovereign who lived there was James I (1566-1625).

The White Tower, the famous square building with turrets in each corner that gave its name to the entire fortress, is currently at the center of this complex of several buildings along the Thames in central London. The complex was used as a fortress, armory, palace, detention facility, observatory, refuge and prison, especially for high-ranking prisoners. This last use gave the expression "To be sent to the tower", synonymous with "to go the prison". In France, we invited a word for it: "embastillé", which was also built in reference to the Bastille. Queen Elizabeth I was imprisoned during her sister Mary's reign, and the last time the tower was used as a prison was during the Second World War, for Rudolf Hess.

The Tower of London was inscribed in 1988 as World Heritage of Humanity by Unesco. The reason for this inscription was twofold. On the one hand, the Tower of London was regarded as an exceptionally well-preserved medieval building, and on the other hand it was of great importance as a center of uninterrupted power for several centuries. These two reasons were sufficient for the fortress to be part of UNESCO's heritage.

It's crazy the number of legends and traditions that revolve around the Tower of London. The most famous legend is undoubtedly that of the crows. There are always some crows raised in the Tower of London. It is a tradition because the legend tells that when the last raven of the tower leaves, the English monarchy will collapse. So, since the fifteenth century there is always at least one raven. They are permanently bred in the form of a group of few individuals, in the early 2000s we were on a group of 7 ravens only. They are fed by the guards and are the object of great attention. In the middle of the twentieth century the population of crows in the tower fell to a single bird, but fortunately we were able to complete the herd in time before it died.

Among the different traditions is the presence of a menagerie, which was installed there at the beginning of the thirteenth century and which lasted until 1828.

The guardians of the tower are the Yeoman warders. They are recognizable by their typical outfits, and especially by their presence in the tower. Formerly recruited to defend the fortress, they are nowadays the guides. They provide a guided tour every hour, free of charge, and the motivation that they put there is proportional to the interest of the visitors. They are often strong heads, passionate about their craft, but must be respected above all. Moreover, they are all former soldiers who have done - at least - 22 years of career!

This body is now feminized since in 2007 a first woman was recruited. Traditions, yes, but modernity above all.

The tower of London contains the famous collection of jewels of the crown, one of the most famous jewelry collections in the world. Their values ​​- obviously invaluable - are mostly patrimonial. It contains, for example, the largest diamond in the world, it is mounted on a scepter. The collection also has two of the world's most beautiful crowns, including the Imperial State Crown that the monarch receives at the time of his coronation.

One can freely visit the jewels of the crown when one is at the tower of London. Nothing but this discovery is worth the visit.

If not, who has never heard of the long torture that took place at the Tower of London? This fortress was not only impressive, it was the seat of many gossip predicting that a thousand tortures were practiced there.

Well, actually, it's not true.

It is true that torture has been used here, it can not be denied. But the reputation of the Tower of London is largely usurped, in fact this legend was mainly propagated by the Protestants of the nineteenth century which there found a way to place itself in opposition to behaviors rejected by the Church. Clearly, the harder they sound from the Tower of London, the more they would look good.

on the other hand the Tower of London was the place of imprisonment of many people. Most of the 21 towers had cells in their ground floor, and the person who resided above had "his" prisoners. The latter were rather high-ranking personalities. It was here that kings and fallen queens were imprisoned, including a king of France. They surrounded famous bandits, government officials who did not choose the right camps during a conflict, a king of Scotland, and so on. From the seventeenth century the role of prison became even more important with the abandonment of the tower by the members of the royal family, who preferred to live elsewhere.

When there were capital executions, there were also, but not so many. Two queens were killed here! To commemorate their memoirs, as well as those of all those sentenced to death in the Tower of London, a memorial was built at the place of execution. It should be noted that only the important people were "lucky" to be killed here - by decapitation. Most of the time the executions took place a little north of the tower, in a place called "Tower Hill" which was a large place to accommodate the crowd.

Learn more about torture, executions and imprisonment at the tower of London.

... or almost. In fact, the Tower of London was built at the end of the eleventh century by William the Conqueror as a dungeon to watch over and even subdue the population of London. Recosnated in stone a few decades later, it was extensively reworked twice. The first time by Henry III in the thirteenth century, a period during which the first enclosure was built, and the second 200 years more goes with the construction of the second enclosure.

Subsequently, no further significant changes were made. Certainly it has changed, it has received many modifications, destroyed towers, others built, ramparts suppressed and buildings destroyed, but the general structure of the Tower of London has not changed for centuries. This allows us to see her in a state close to what she was at the time.

Learn more about the history of the tower of London.


Visit the Tower of London

Want to visit the Tower of London? It's a good idea !

In fact the Tower of London is one of the main elements of the heritage of the British capital. London is a beautiful, modern city, and requires several days of sightseeing. Needless to go there without visiting this tower, which is actually a really very interesting fortress.

For a decent amount - not cheap either ... - you can spend a whole day in the walls. But half a day is the minimum. You will see not only the buildings, the towers, the ramparts, but also the collections stored in the white tower, and especially the fantastic collection of Jewels of the crown. But that's not all: You also have to see the museum of fusilliers, the animations, the ceremony of the keys, and you can follow, free, the guided tours of Yeoman Warders, etc.