The Bloody Tower is one of the constructions launched under Henry III between 1238 and 1272, during the first wave of modifications of the Tower of London. This wave consisted in the construction of a solid rampart, the first rampart, and a series of defensive towers which also served as a dwelling place. 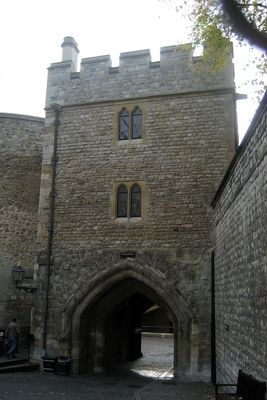 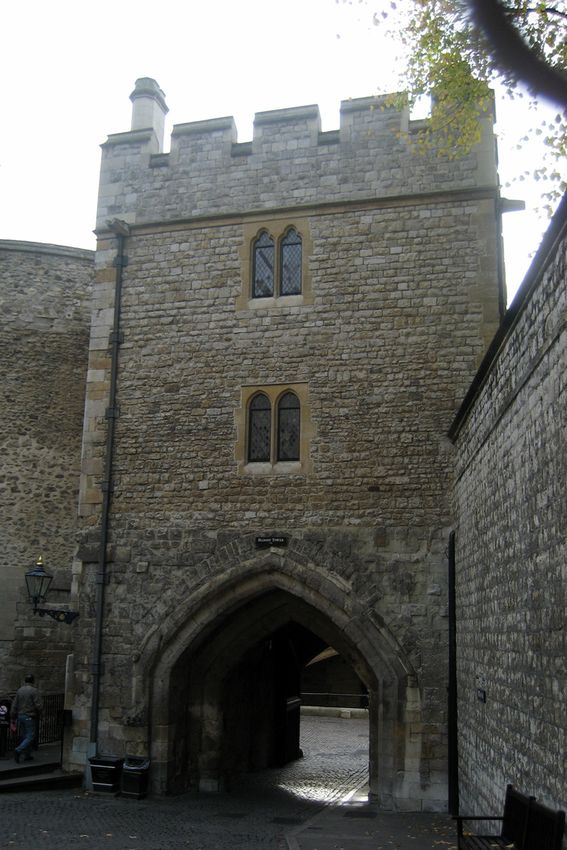 The bloody tower is on the southern rampart, facing the Thames. It is adjacent to the Wakefield Tower, the King's former apartment. It is a massive rectangular building, approximately 6m by 8 meters wide, with a large passage on the ground floor, which can be blocked by a heavy harrow with a lifting mechanism located on the first floor floor. Moreover, this mechanism is still in place these days and can still be seen.

This tower, like many others of that era, was equipped with cells in the basement. The most famous prisoner of this tower was Sir Walter Raleigh, an English explorer, officer and poet of the sixteenth century who took part in the conquest of the Americas against the Spaniards but who fell into disgrace and ended up prisoner in the bloody tower. It was executed in 1618 at the Tower of London, but not in this tower.

Other people were imprisoned or died in the bloody tower: Archbishop Tudor Cranmer, Bishops Ridley and Latimer, Protestant martyrs condemned to death for heresy (who were later burned on a pyre at Oxford in 1556 on the orders of the Catholic Queen Mary I). Hugh Latimer and Nicholas Ridley were linked to the same stake and burned together. When the executioner was preparing the wood under Ridley's feet, Latimer turned to him and said, "Be well comforted, Dr. Ridley, and play the man. England, for I never think I ought to be extinct. "

Thomas Cranmer was Archbishop of Canterbury under King Henry VIII. He supported the divorce of King Henry of Katharine of Aragon, the mother of Queen Mary. The latter ordered Cranmer to return to the Catholic faith, Cranmer submitted to his queen in spite of her religious convictions. Mary did not believe that Cranmer's submission was sincere and condemned her to share the fate of Latimer and Ridley and be burned at the stake. Cranmer resumed his letter of submission to the Queen and insisted that he murder in the Protestant faith by announcing: "I sinned, in that I signed with my hand what I did not believe in my heart When the flames are lit, this hand will be the first to burn. " When the fire was lit around his legs, Cranmer bent down and plunged his right hand into the flames. He held it there, unshakeable, until it burned like a stump. Before disappearing into the flames he said:

"This hand has offended ... Lord Jesus, receive my spirit".


Sir Thomas Overbury, poet and courtier, was poisoned in bloody latour in 1613. Overbury, a close friend and advisor to James I's favorite, Robert Carr, was arrested for refusing to undertake a diplomatic mission. In what was to become a major scandal at the time, he was poisoned in the bloody tower. Carr and his wife Frances Howard were later tried and convicted for complicity in the murder. The two were sentenced to death, but they were spared by the king and remained prisoners in the Tower until their release in early 1622.

Finally Judge Jeffreys died at the bloody tower in 1688. He had sentenced 320 people to the "Bloody Assises", a sort of court intended to execute or banish in penal colonies. It happened after the battle of Sedgemoor that ended the rebellion of Monmouth in England. During the revolution, when King James II was forced to flee the country, Jeffreys stayed in London until the last moment. When William III's troops approached London, Jeffreys tried to flee and follow the king abroad. He was captured in a public house in Wapping, disguised as a sailor, but was recognized by a survivor. Jeffreys was terrified by the public when he was taken to the Lord Mayor and then to the prison "for his own safety". He begged his captors to protect him from the crowd. He died of kidney disease during his detention in the Tower on April 18, 1689. He was buried initially in the chapel of St. Peter Ad Vincula, in the Tower, but in 1692 his body was moved to St Mary Aldermanbury.

The bloody tower was originally called the garden tower in reference to the Constable's garden which was later transformed into a parade area. She took the nickname of a bloody tower without knowing what murder was at the origin. Perhaps it is the suicide of Henry Percy, 8th Earl of Northumberland, but it is more likely after the murder of the two princes Edward V and his younger brother Richard, Duke of York. It can also be the death of Henry VI, died in this tower, during the episode of the war of the two roses.


The mysterious disappearance of the two brothers

It was in this tower that the two young Princes Edward V, thirteen, and his brother, Richard Duke of York, disappeared. Edward V's uncle Richard, the Duke of Gloucester, was declared Lord Protector in 1483, and at that time Edward was confined to the Tower of London with his younger brother Richard, while the Duke of Gloucester was proclaimed king by Richard III. The two Yorkist princes were last seen in June 1483, and it is traditionally believed that the most probable reason for their disappearance is that they were assassinated in late summer 1483. But specialists are not there is a conflict on the place and the fate of Edward V and his brother. Traditionalists believe they were killed by their uncle Richard, while the revisionists argue that Richard received the wrong role through Tudor propaganda but that his successor, Henry VII, had the same reason for removing the two boys as they stood on his way to the throne as much as Richard.

Now bones that seem to the princes were discovered in 1674 when a staircase leading to the white tower was demolished. These bones were then removed from the Henry VII chapel and placed at Westminster Abbey by Charles II. Richard III was defeated at the Battle of Bosworth Field in 1485 by the Lancastrian Henry Tudor, who rose to the throne as King Henry VII.

If we are to believe the legend, the bloody tower is haunted by the ghosts of the two princes. The guards at the end of the fifteenth century reported that, passing the bloody tower, they saw the shadows of two little figures sliding down the stairs still wearing the white clothes they had the night they disappeared. They are said to have stood silently, hand in hand, before disappearing into the tower's stones.

Learn more about the two princes.