﻿ ﻿ The chapel of Our Lady of Aparecida

The chapel of Our Lady of Aparecida

The pedestal of the statue of Christ the Redeemer is quite special since it is hollow and since 2006 hosts a small chapel dedicated to Our Lady of Aparedica. It is the Holy Protector of Brazil, its name is found throughout the territory of this highly Christianized country, so it is not an originality. It is known in Brazil under its local name, "Nossa Senhora Aparecida". 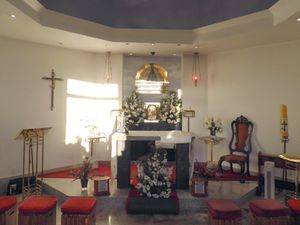 Chapel of Christ the Redeemer

Chapel of Christ the Redeemer 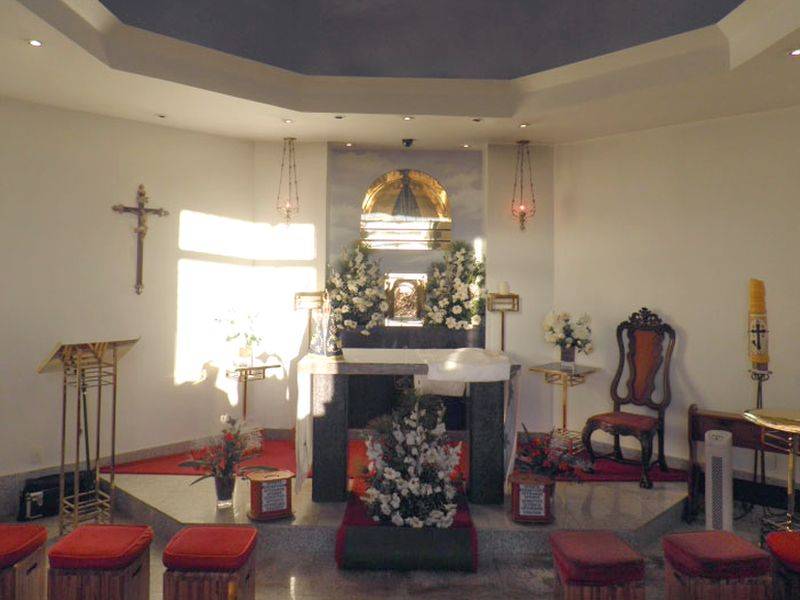 Our Lady of Aparecida in Christ the Redeemer of Rio

Our Lady of Aparécida is a modest-sized but well-appointed chapel. It consists of a single piece of about 6m wide, octagonal as is the base of course. Its interior walls are sober, white, the floor being marble and the ceiling hollow, mostly blue sky to recall the outside, but with an octagonal white outline also. The sobriety of the chapel contrasts with the much more loaded furniture: 6 lacquered wooden stools surmounted by a red seat in fabrics, a baroque chair in red / orange tones, a lacquered wooden tray clean, and of course an altar in marble, a marble different from the ground, gray, which denotes a little. A modest-sized cross adorns a wall when it does not temporarily receive more ostensible decorations. The wall wall behind the altar is decorated with clouds that recall the sky from the ceiling, it is equipped with a niche where throne a copy of the tunic of Aparecida. This chapel is often flowered.

It was consecrated in October 2006 on the occasion of the 75th anniversary of the statue, by the archbishop of Rio Eusebio Oscar Scheid.

The chapel is not always accessible, in fact it is often closed but fortunately it is a grid of modern style, so that goes well with the monument itself. The fact that it is a grid makes it possible to see its interior, even when it is closed. Convenient. When the monument closes, the staff pulls a door of course.

The office is held once a day, at 11 am. At the end of the Mass a prayer of the Angelus is made, then comes a blessing in seven languages. Baptisms and even weddings can be planned, but you have to go ahead, and of course ask for permission to do such an event, and get an officiant. There is a local phone number for this, it is visible on the official website of the statue. 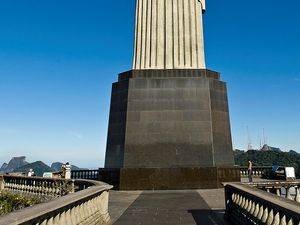 Pedestal of Christ the Redeemer

Pedestal of Christ the Redeemer 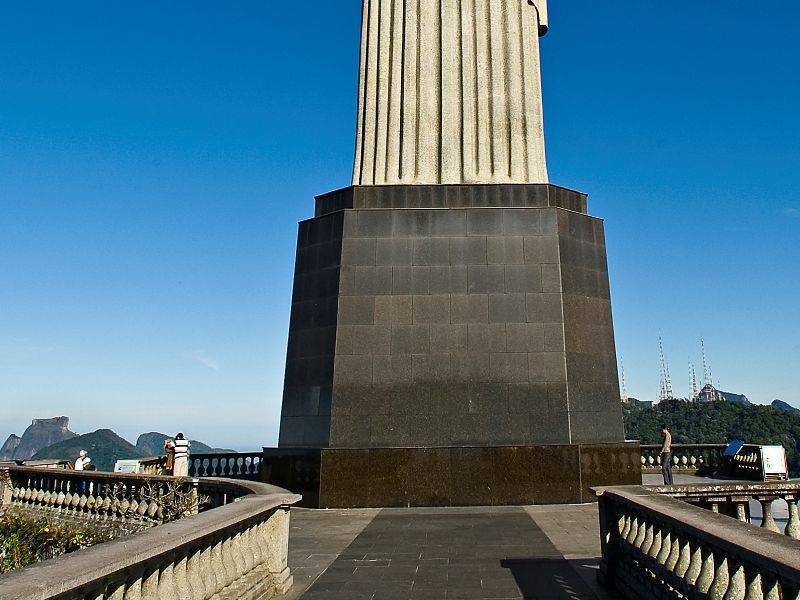 Pedestal of Christ the Redeemer at Rio

The pedestal of the statue of Christ the Redeemer, on the outside, is typical of this monument, in the sense that one does not find such an architecture elsewhere. Here, the pedestal is very thin compared to the statue, it seems perched on a kind of large stool. It is octagonal, like that of the Taj Mahal (although in its case it is rather a terrace than a base), it is more simple than that of the Statue of Liberty, which is typical of the construction of the end of the nineteenth century, in short, it is a normal base for an art-deco statue. Its surface is sober, it is polished black granite plates, 50cm by 30. Sobriety, it is a bit the master word of this base.