The Corcovado is a mountain of the bay of Rio de Janeiro, one of the main cities of Brazil. It is known because it has been overcome since the middle of the 20th century by the famous statue of Christ the Redeemer who dominates the city. The Corcovado and the statue are often confused, but the first is the name of a rocky peak situated in the center of the city, the second being the work of art. To speak of the Corcovado to designate the statue is therefore a mistake, alas very frequent. 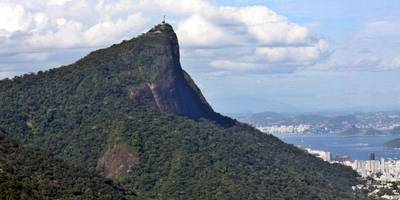 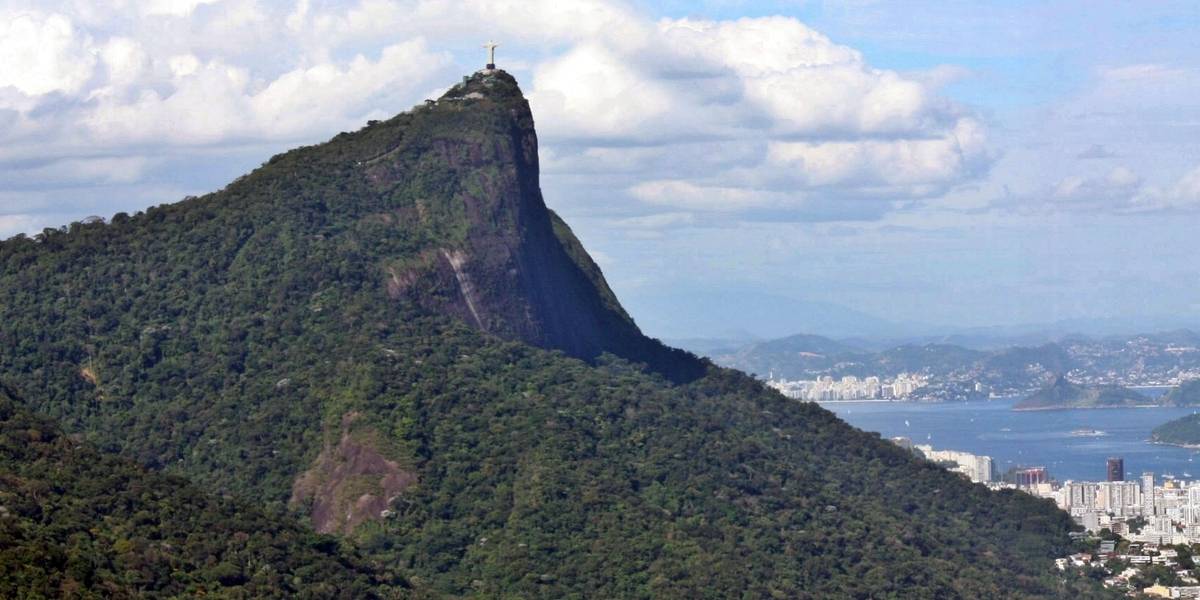 The Corcovado, one of the highest mount of Rio

Corcovado, in Portuguese, means "The Hunchback". It is a very strange name for a mountain so abrupt, one would rather expect a mountain that rises in altitude slowly. Its initial name was "Pinaculo da Tentacao" (Pinnacle of Temptation). Its altitude is 710m, which is impressive considering that its base is almost at sea level. The Corcovado is made of granite, which is why it exists: In this part of the world the erosion due to rain and strong ocean winds have eroded the soil that has gradually declined. Originally, the geographic area where Rio was built was at altitude, but this is no longer the case today. The hardest rocks have been more resistant to erosion, which is why we now have this landscape: Numerous eroded peaks surround a sprawling city that stretches along their slopes.

The Corcovado is on the east side abrupt. The cliff is impressive, it falls more than 100m before continuing following a slightly less inclined apeak. At one third of the height, the mountain follows a quite usual slope in this region, a steep but practicable slope on foot. On the west side the mountain slopes gently, which is relative for a geographically so chopped area.

The Corcovado is a symbol of the city of Rio, as well as the sugar loaf, much smaller it. But if the sugar loaf is so known it is due to its so special shape and location, a waterfront and isolated from the other peaks of the area. The Corcovado, on the other hand, is slightly more inland and stands out less in the landscape.

This peak so original and so close to a city has necessarily given ideas to the inhabitants. Yes, it had to be exploited, if only for tourist purposes. And this is what was done in 1824 with the inauguration that year of the first Brazilian road built exclusively for a tourist purpose. 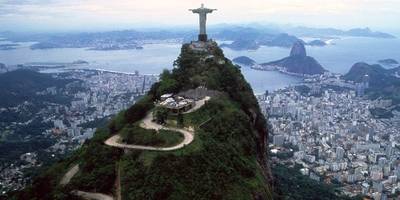 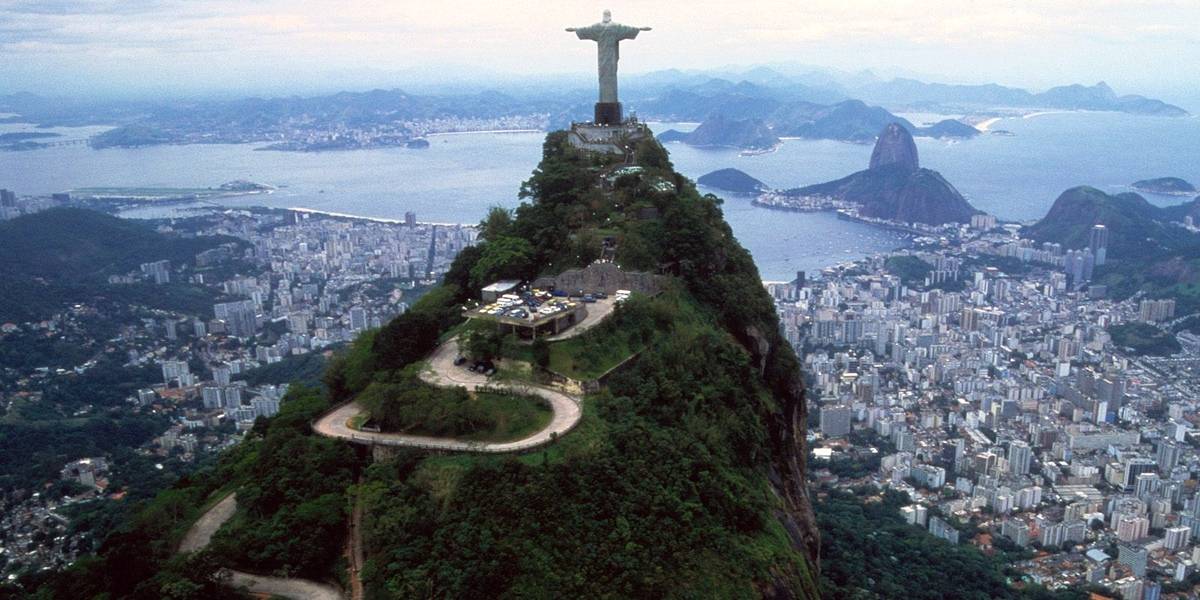 The Corcovado and the installations of the statue

For the time it was a real achievement because not only was it difficult to build because of the slope and working conditions on the spot but also because it was hard to conceive of spending time and effort, money for tourism, at that time this area did not have the same economic power as other economic fields such as industry or agriculture, for example. This road was almost 4 km long (3824 meters exactly, and it still does!) But it is no longer operated nowadays, it is reserved for emergency services, a specialist transport company and to the services of the tourist installations of the summit, like the restaurants and the shops.

Nowadays to go there we use the train instead. This railroad was a real technical achievement, its construction lasted a few years at the end of the nineteenth century and was officially inaugurated on October 9, 1884 by the emperor of Brazil himself. It must be said that the construction site was important, not only had it had to solve a whole lot of problems related to the steep slope and the climatic conditions during the construction, but it was also a showcase of the local know-how at a when the spread of railways across all countries was not yet a matter of course. Building a railway line, at the time, was of great complexity. To do so under such conditions was even more so.

The success of the engineers continued afterwards, since in 1910, 21 years later, the line was electrified, the coal-powered locomotives were replaced by the more modern electric ones. 25 years later it was used for the conveyance of building materials for the statue of Christ.

This train still exists, it is even the main way to surrender to Christ the Redeemer of our days. The departure station is in the neighborhood of Cosme Velho.

Learn more about how visiting Christ the Redeemer.


Lastly, more recently, the Corcovado has continued its pace of renewal of tourist facilities: In 2003 the 220 steps which allow to reach the station of the summit to the terrace of the statue has been replaced by a escalator, much more practical, in particular for disabled people.


Things to see and do

When one thinks of the Corcovado, one inevitably thinks of the statue of the Christ the Redeemer who dominates it, the two are so linked that they are often confused. This statue is indeed a symbol not only of the city of Rio but also of all Brazil. But the mountain has other assets: the park of Tijuca and the climbing paths.

There are many climbing paths in Rio, the best known of which are on the peak named Pedra da Gavea, which is further south. But the Corcovado still includes 54 climbing routes, some of which are very complex. Climbing enthusiasts will be able to come here, not only are these routes interesting (it seems) but you can legitimately be proud to have climbed on the Corcovado! Otherwise Tijuca Park is the largest urban park in the world. It is a sometimes very thick forest, with wildlife and copious flora. The Corcovado is in this park, and not the reverse: This park is so large that it includes several peaks, including this one. This park is crossed by many hiking trails that are easily found. There is even a path that starts from a park at the foot of the mountain and arrives at the terrace of the statue. Well, if you go up there on foot, do not forget your wallet, you have to pay the entrance to the statue on the spot.

Learn more about park of Tijuca.

Rio de Janeiro is a city in southern Brazil, along the Atlantic coast. It extended along the coast and all around a deep, oval-shaped bay, with a narrowed opening on the ocean. This bay was ideal for protecting vessels docking in America here, so it was logical that a city develop there. Rio is on the left bank of the entrance to the bay, as shown in the maps below. 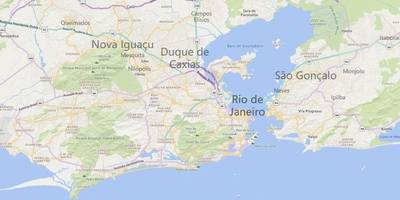 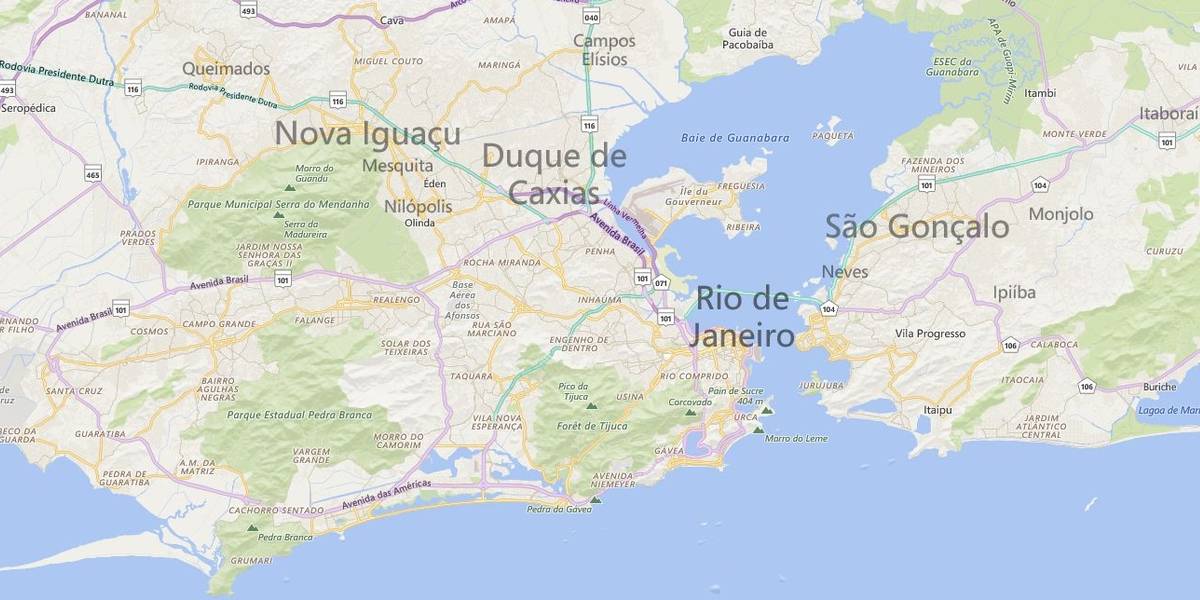 Map of the bay of Rio 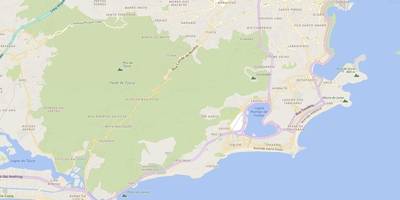 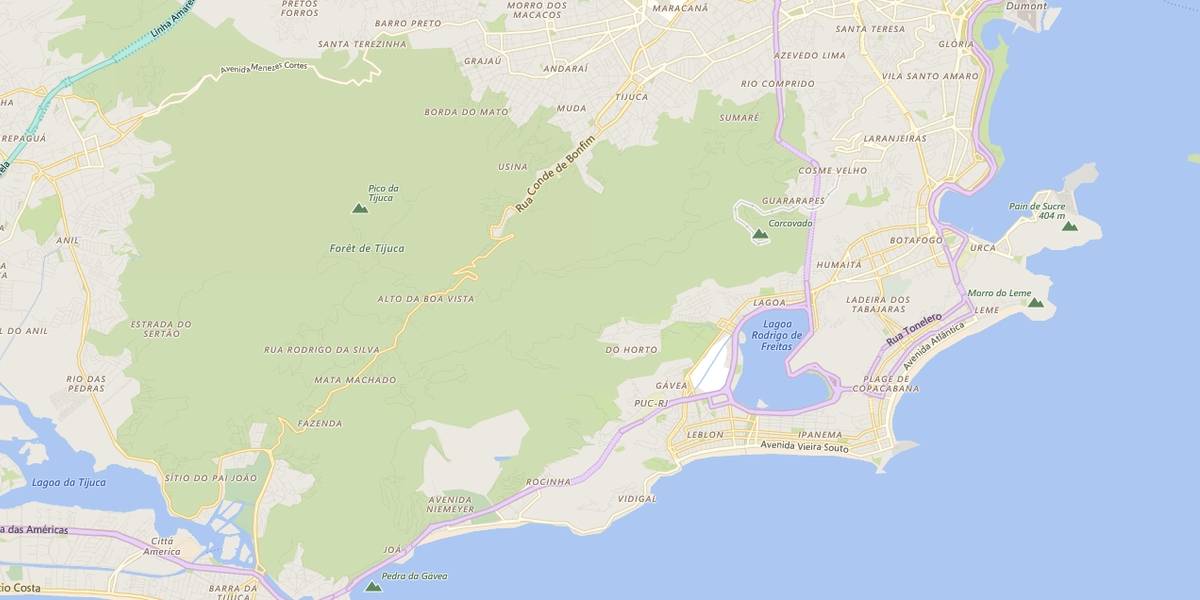 Map of the forest of Tijuca 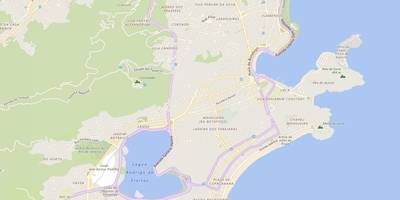 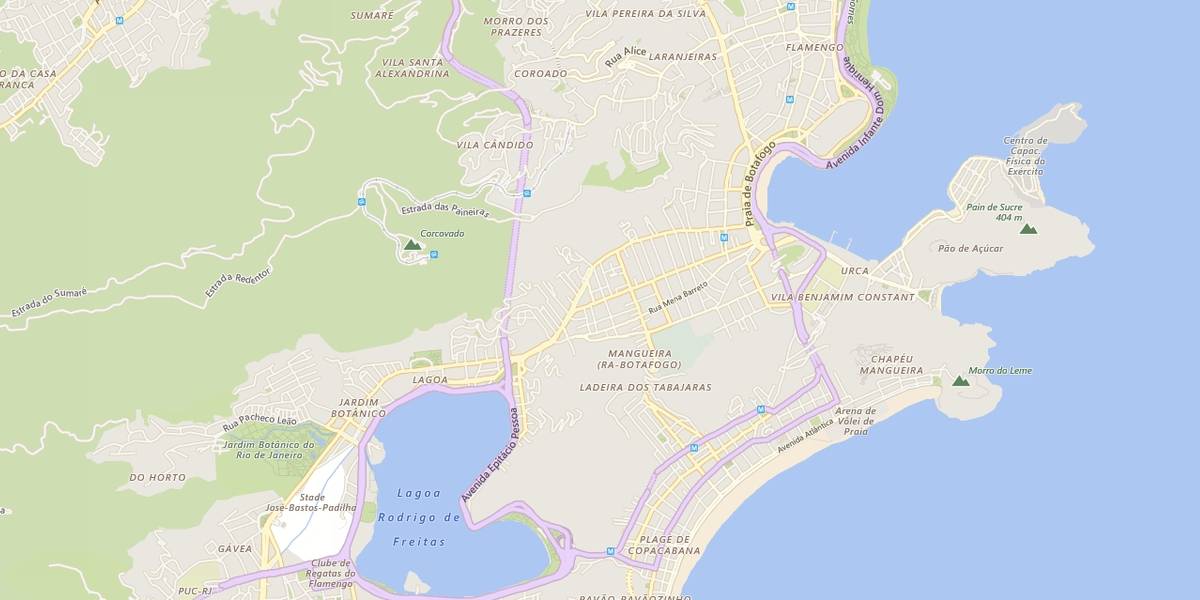 Map of the main peaks of Rio

The entrance to the bay, on the left side, is geographically characterized by a series of high peaks of which the two most known are the sugar loaf and the Corcovado. There is also the Morro do Leme, the peak of Tijuca, the Pedra da Gavea, etc.

The sugar loaf is so named because it has the shape ... of a sugar loaf. Little used to using sugar loaves in Europe, we have forgotten the shape that it has but some countries use it frequently, for example Morocco. This small block of sugar 20cm high to a shape of ogive whose end would be well rounded. In fact, it is the exact shape of the sugar loaf, the peak closest to the entrance to the bay. It is 396m above sea level. 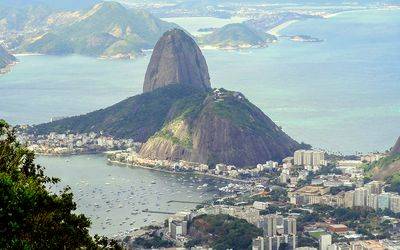 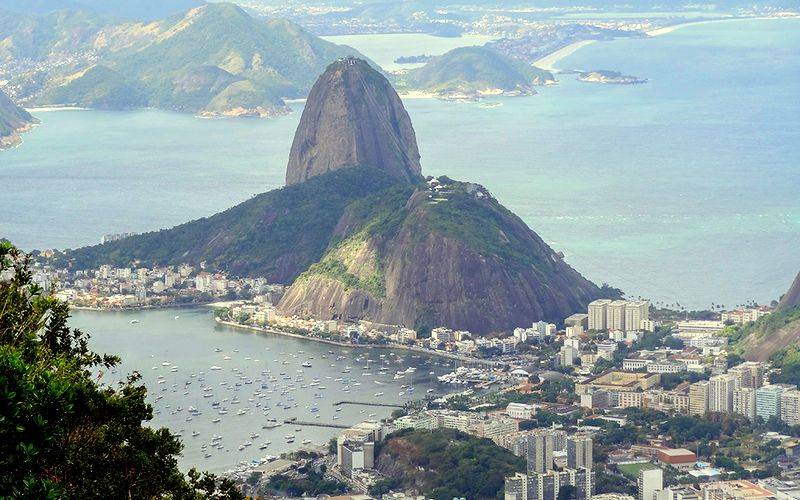 The Sugar Loaf from Christ the Redeemer

The Morro do Leme is a steep mountain of more modest size located to the south of Sugar Loaf, it is its continuity, but facing the ocean it has not been protected which explains why it is smaller these days . Always facing the ocean there is, more to the west, the Pedra da Gavea, a mountain of 842m of altitude in the shape of trapeze. Also quite abrupt, this peak is equipped with climbing routes. The peak of Tijuca is the highest of the city, it climbs to more than 1000m of altitude. Located in the heart of the park of the same name, it is accessible by footpaths. Finally the Corcovado, also located in the park of Tijuca, is probably the best known peak of Rio with the sugar loaf.

Description of Christ the Redeemer

Lightning on Christ the Redeemer