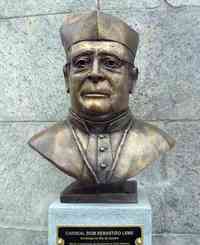 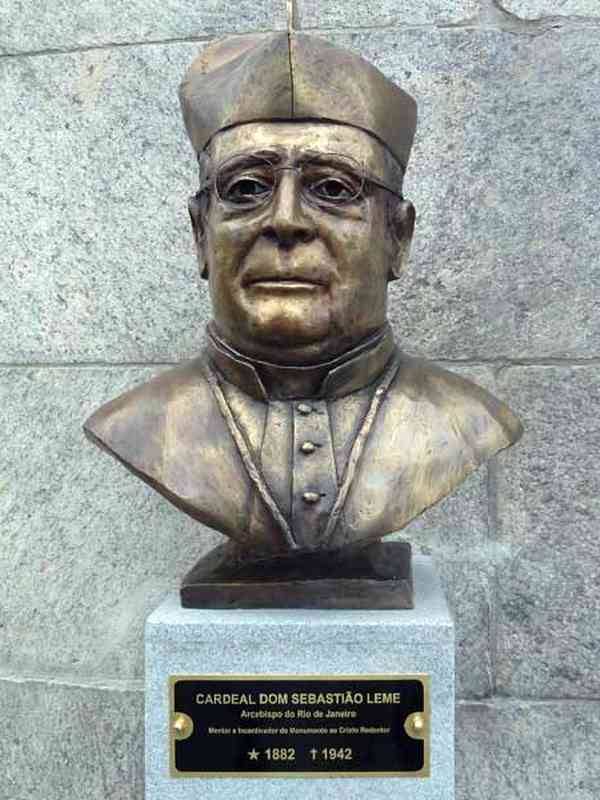 Sebastião Leme da Silveira Cintra is the Brazilian cardinal who inaugurated the statue of Christ the Redeemer on 14 September 1931. He has his bust on the spot to commemorate his memory.

Born on 20 January 1882 in the town of Espirito Santo do Pinhal in the diocese of Ribeirão Preto (now the diocese of São João da Boa Vista) in Brazil, Cardinal Leme was the son of Professor Francisco Furquim de Leme and from Ana Pio da Silveira Cintra. He began his studies on September 1, 1894, at the episcopal seminary of São Paulo, where he received the tonsure on August 28, 1895. Sent to Rome, where he resided at the "Pontificio Colegio Pio Latino-Americano", he studied sociology from of 3 October 1896, and from 4 November 1897 he studied at the Pontifical Gregorian University. He obtained a PhD in philosophy and theology.

Ordained priest on October 28, 1904 in rome by Francisco do Rêgo Maia, bishop of Belém do Pará, returned to Brazil immediately after. He celebrated his first Mass on 15 December 1904 at the Church of Our Lady of the Holy Spirit of Pinhal, where he had to baptize and give first communion. On March 7, 1905, he obtained the pastoral ministry of the archdiocese of São Paulo and was appointed co-adjutant of the parish of Santa Cecilia, professor of philosophy at his seminary, promoter of the diocese, director of the archdiocese newspaper "A Gazeta do Povo ". On February 11, 1907, he became president of the Confederation of Catholic Associations. He is also appointed Vicar General of São Paulo - with ordinary power as Vicar General - in January 1910.

On 24 March 1911 he was elected titular bishop of Ortosia di Fenicia and appointed auxiliary of São Sebastião de Rio de Janeiro. Devoted to Cardinal Joaquim Arcoverde of Albuquerque Cavalcanti, archbishop of São Sebastião de Rio de Janeiro, on June 24, 1911, assisted by Francisco do Rego Maia, Titular Archbishop of Nicopoli al Nesto, and by the Cardinal Joaquim Arcoverde of Pio Latino Americano in Rome. Juan Nepomuceno Terrero y Escalada, bishop of La Plata, chose as episcopal motto "Cor unum et anima una". He took over his post on 4 November. He was promoted to the episcopal seat of the metropolis of Olinda on April 29, 1916, on April 29, 1916, taking possession of this episcopal seat on August 16 of the same year. He received the pallium of Archbishop Adauto Aurélio de Miranda Henriques of Paraíba on June 22, 1917 in the church of Carmo in Paraíba. He also became Archbishop of Recife when the episcopate was integrated with that of Olinda, April 29, 1918 During his reign he had the cathedral rebuilt and the São José de Manguinhos palace was redeemed, founded the upper course of religion to increase the faith Christian in the country vis-à-vis the young people of Recife and encouraged ecclesiastical vocations. He was appointed titular archbishop of Farsala and appointed coadjutor of Rio de Janeiro with succession rights on March 15, 1921, and succeeded the episcopate of São Sebastião de Rio de Janeiro on April 18, 1930.

Bishop Leme da Silveira Cintra was appointed cardinal prior to the consistory of June 30, 1930. He received the red headgear of His Lordship Bonifacio ed Alesio on July 3, 1930. Returning to Brazil on October 19, a few days before the revolution of 1930, led by Getúlio Vargas, during which he served as a reconciling figure, he succeeded in convincing President Washington Luís to leave the government to avoid a bloodbath. He was the legal representative of the Pope at the inauguration of the statue of Christ the Redeemer of Rio on 14 September 1931, then at the National Eucharistic Congress of Bahia on 15 June 1933 and finally that of Belo Horizonte on 27 July 1936. He participated in the conclave of 1939 which made elect Pius XII. A papal legate at the Plenary Council of Brazil and at the Eucharistic National Congress of Recife (July 21, 1939), he was also the founder of the Pontifical Catholic University of Rio de Janeiro in 1941. This university was inaugurated at the campus of Gávea by the cardinal -even.

Throughout the Vargas government he remained as neutral as possible with regard to political speech, although he cooperated on religious subjects. He also founded the Catholic Electoral League (LEC), the Brazilian Catholic Action (CBA) and had religion taught in his federal district. He is also the promoter of the Faculty of Law and Philosophy (1941) which was the starting point of the Pontifical Catholic University of Rio de Janeiro.


Sebastião Leme da Silveira Cintra passed away October 17, 1942 in his room at the São Joaquim Palace in Rio de Janeiro. he is buried in this city.

Biographies on Christ the Redeemer

History of Christ the Redeemer at Rio