Domitian is the third emperor of the Flavian dynasty who reigned over the Roman empire during the 1st century AD. Born in 51 and died in 96, he succeeded his brother Titus in 81. 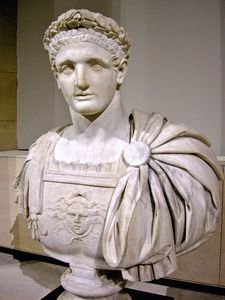 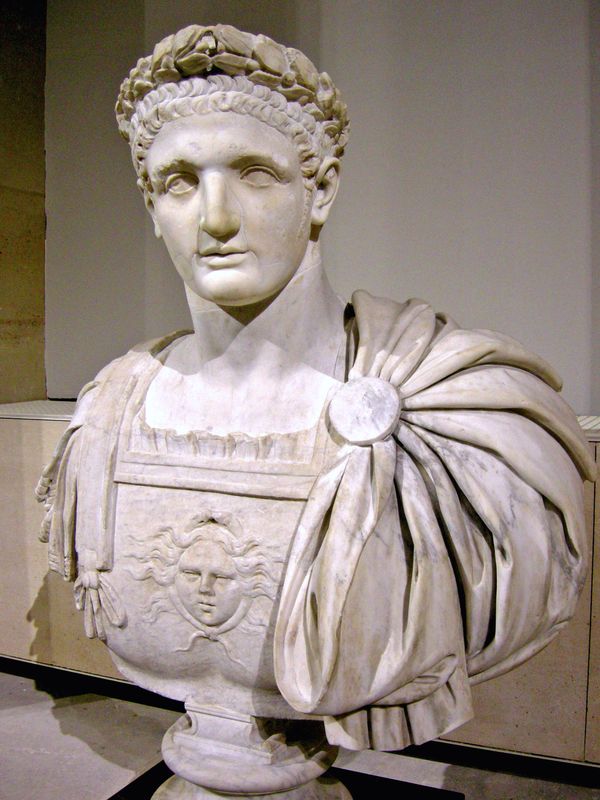 Domitian was born on October 24, 51 in Rome. His father was the future Emperor Vespasian, his mother Domitilla the Elder, he is the third child of the couple who had before him his brother Titus and his sister Domitilla the younger.

While Titus follows a military training in the wake of his father, Domitian is rather sidelined from these considerations and receives a typical education of the Roman upper class, which he belongs. His mother died young and his father left for his duties, he is placed at Sabinus, a friend of the family. He learns rhetoric and literature, which he skilfully handles, but is not familiar with military art.

The young Domitian is described by his contemporaries as a taciturn, withdrawn, unsociable boy. Older he enjoys being isolated in his beautiful villa and spends his days hunting, enjoying the solitude that requires the art of archery, an activity in which he excels.

This is an important event that will pull him out of his condition: Nero's suicide.


His action during the taking up of his family

This death occurred June 9, 68, it follows a pressure of the army, essentially. Then follows a period of chaos during which four generals will dispute power. Among them, Vespasian, the father of Domitian. The struggle between the four belligerents was essentially a war between legions and the struggle for influence in the Roman senate. It ended on December 21, 69 with the final victory of Vespasian who is officially appointed emperor by the Senate. Domitian, who had followed the conflicts in the shadows, enters the senate as his father's representative and, more generally, the Flavius ​​clan. It must be said that if Rome has pacified, Vespasian will arrive there in September, 9 months later.

He also receives the title of Caesar and becomes a praetor. A praetor, under the empire, was a senior magistrate specializing in private law (mostly, but not only). They received a random jurisdiction and had to choose their jurors from a list proposed by the emperor. They held this charge for a year.

Domitian is only 18 years old. He is a young, inexperienced man, who is closely watched by Mucian, the trusted consul of Vespasian, who appointed the latter emperor. There is an internal struggle between Mucian, the guarantor of the order and the emperor's confidant, and Domitian, who represents the emperor. It is then that a revolt breaks out in Gaul following the weakening of the central power during the previous year. Mucian sent seven legions into the Empire to ensure stability and Domitian joined one with the hope of taking command, which will not happen. Returning to Rome, he left his senatorial offices and returned to isolate himself in his villa, preferring art and literature to the practice of politics.

This short political experience is no less educational. Always in the shadow of his father and even more of his brother, Domitian knew how to listen and discover the secrets of the Senate through relatively honorary functions, without real powers. Now in 79 Vespasian dies, and it is his older son Titus who takes power. The latter had been associated with power very early and already led, in fact, many elements of the political life of his time. The passage was therefore smooth, without there being any notable changes in the governance of the Empire. On the other hand, when Titus died in 81, only two years after his accession to the throne, the question of his succession arose, since no one had been associated with the power of Titus' time.

Domitian is however declared emperor. But it will bring about a real change in politics.

First of all, he removes some powers from the Senate to give himself more. He declares that he wants to restore his luster to the Empire and is committed to it, conscientiously. He dismisses any corrupt person from power and makes sure that the new laws that he promulgates bear fruit. He also strengthened his authority in the distant provinces through a strong, loyal administration. In the time of Domitian the Roman Empire knows a prosperous period characterized by a restoration of its power in the known world.

From the shy and withdrawn child there is not much left, during his reign years. Domitian understood the importance of his new role and plays it as best he can. He navigates between strength and gentleness while redesigning his empire.

His reign is marked by several actions. Question conquests outside, the field is thin. Domitian did not really launch great territorial conquests as his predecessors could do. On the other hand, it incurred a lot of expenses to ensure the calm inside the borders of the Empire. It must be said that the years of struggles for the power of his father were not that far, and therefore the different provinces of the Empire could still hope for a share of autonomy that could lead them to leave the Empire . Domitian did not want this scenario, he did strengthen internal security by asking his legions to ensure peace in the Empire rather than conducting external wars.

Among the other notable actions, he has the currency revalued by increasing the share of silver in coins, which strengthens the economic power of the Romans. He manages to find a balance between huge public expenditure (in particular for the management of permanent armies) and revenue. He made himself well known to the people by restoring rights suppressed under Nero and by organizing public banquets as was the case formerly.

He also reviews the architecture of the city of Rome, which still bore traces of the great fire of 84 that ravaged part of the city, damaging the famous Colosseum, brand new at the time.

Domitian is assassinated on September 18, 96, by a plot hatched by Minister Parthenius, who had grievances against the Emperor. We know very little about this plot.

The successor of Domitian is announced at his death, it is Nerva, a politician rather old and childless, whose involvement in the plot is likely but has never been confirmed. Thus ended the Flavian dynasty which comprised 3 members: Vespasian, Titus and Domitian.

Domitian married Domitia Longina, the youngest daughter of General Cnaeus Domitius Corbulo. This alliance which was not approved by his father Vespasian ends up having a political interest, which allowed him to obtain the approval of the emperor over time. It seems that in 83 Domitian drove out his wife for a relatively short time since it reappears at the imperial palace the following year. In the meantime the couple will have had a son whose name is unknown because he died young, in 83.

Domitian grew up alone, far from his family. This state of affairs has probably forged its character characterized by loneliness. As a calm child, the grown-up he became was a person who isolated himself, attending only few people.

His youth took place during the 1960s, just at the time of the fall of Nero, a period that coincided with a certain decline of the Roman Empire. This period ended in 69 with the seizure of power by his father and then his brother. One imagines that Domitian was at this moment caught between divergent feelings, struggling between his taciturn character and his desire to be seen as close to the ruling family.