Vespasian is the Roman emperor Nero successor, he ruled from 69 to 79. Founder of the Flavian dynasty, his eldest son Titus will succeed him, and his second son Domitian, on the death of his brother. The Flavian dynasty only lasted during the time of these three emperors, but it was under their reigns that the Colosseum was built. 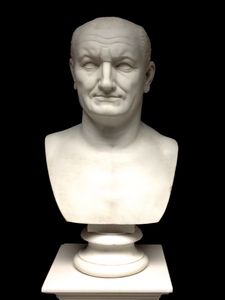 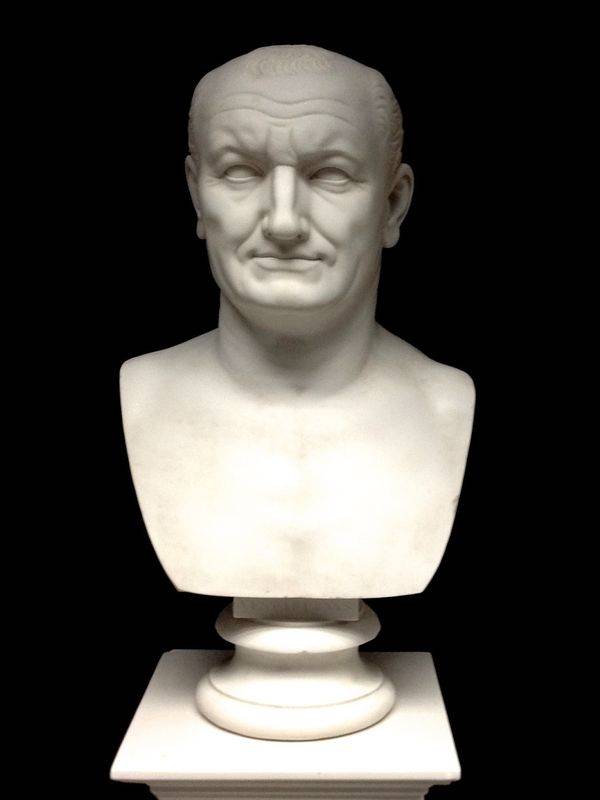 Bust of Vespasian, the Roman emperor who built the Colosseum

Titus Flavius Vespasianus, known as Vespasian, was Roman Emperor of December 22, from the year 69 to June 23, 79. Born in Reate, Italy, on November 17, year 9 of Titus Flavius Sabinus his father and Vespasia Polla his mother he is at the origin of a new dynasty of the Empire.

Vespasian comes from a modest family that has been active in military and political art. His grandfather Titus Flavius ​​Petro was a centurion, he had fought for Pompey. His father was not integrated into the army as he was accustomed to be, he was tax collector in Asia. This man had two sons. The eldest, Sabinus, was prefect of Rome. The second, Vespasian, was emperor. On his mother's side, his grandfather was Vespasius Pollion, a military tribune.

Vespasian was raised by his paternal grandmother, Tertulla, in his estate of Cosa. As a young man, he went to Thrace as a tribune of the soldiers, then, at the time of the questure (magistrature of an annual duration aiming to certify the finances, to be responsible for the expenses and the public collection), he was sent in Crete and Cyrenaica (Lybian province). Under the reign of Emperor Claudius he became Legion Legate (Senior Officer Commanding a Legion) in Germany. Claude then appoints him consul (Magistrate commander of the armies and having the supreme power civil and military), then proconsul (Governor) in Africa. Unfortunately for him this post will bring him the ruin and the loss of any political credibility at the same time as any influence: He lost his status and found himself exercising a manual job to survive. He is then forced to leave public life, even fearing for his life.

In 66 began a revolt in Judea. This was his chance. The following year he was appointed Legate of Judea and succeeded in stopping the rebellion, giving Vespasian a reason to return in favor to the Emperor Nero. And that's exactly when Nero dies.

Following the death of Nero then begins a struggle for succession. Indeed, Nero leaves behind a dictatorial situation. The succession is not organized. The courtroom officially crowns Otto as emperor, but in the provinces this name is not supported. The legions of Spain support Galba, those of Germania Vitellius and those of Orient Vespasian, who goes to Alexandria urgently to receive his title. In Rome the prefect of the city supports Vespasian, which is relatively normal given that it is ... his brother Flavius ​​Sabinus. Thus supported, Vespasian can organize the legions of the Danube to force those of germany to support it. Not succeeding, he starts the attack and gets the victory. From that moment, all the legions recognizing him as emperor, he is also recognized in Rome, formalizing his title of successor of Nero. He founded at the same time the Flavian dynasty, which will continue only with his two sons.

Vespasian was a great reformer. It must be said that the reign of Nero, who preceded it, was more destructive than constructive. Reforms have been made in different areas.

From a legislative point of view, what is important is the Regio de Imperio Vespasiani lex. It is the text that legalizes its accession to the seat of emperor by conferring on him the associated powers. This text is interesting to the extent that unlike Augustus and his successors, who applied a right to make the Emperor an exceptional man, Vespasian is recognized as a magistrate of the Roman people. He is therefore only an administrator of public goods (in the broad sense) and a different being. It brings him closer to the people, which is confirmed by his acts as emperor, precisely.

If not legally it chooses to have appointed by lot the judges whose tasks are to deal with cases related to spoliation during the civil war, another major reform at that time.

From a tax point of view, the reform consisted essentially of limiting the expenses as much as possible while recovering the money where he could recover it, whatever the means or the way this money was acquired. Vespasian was an emperor with a great sense of economics. He limited the representation expenses of the empire to ensure the pay of legionaries. It must be said that when he came to power he found an empty treasure, Nero having failed to keep a working capital to ensure the daily running expenses. Vespasian had to quickly find money, which he did on the one hand by significantly reducing the number of Legionnaires legions of Germania, held by his opponent Vittelius, on the other hand by participating in looting or spoliations on people who, in his eyes, have been illegally enriched.

The provinces of the Empire are also put to contribution. To punish the Jewish rebellion, he created a new tax, the judaicus fiscus. Several Roman provinces must now pay taxes, whereas before they were only a tribute. The tribute is a fixed sum to be regulated at regular intervals. The tax is much more complex because it depends on the active laws during this period and allows to recover much more money. More anecdotally, he also recovered money by imposing urine. Indeed, urine was the only agent that fixes the color of dyes. When he was criticized for this amazing tax, he made an answer which is at the origin of our expression "Money has no smell", in reference to the bad smells released from the urine used for this collection.

From a military point of view Vespasian reinforced the legions positioned at the borders. He created two new legions (for a total of 29) and moved to Cappadocia. He cleansed the Roman nobility by removing from power those who seemed amoral to him, defending the weaker members of the nobility but in their good rights compared to the higher members, for example the senators, if they were corrupted.


Vespasian and the Senate

The Senate is one of the oldest political institutions of the Roman Empire. Its power has not ceased to evolve during the time, in the monarchical era for example it was only an assembly of advisers. During the Republic the power of the Senate continued to increase, with an apogee shortly before Vespasian. The latter reduced this power and this policy will be continued later, the Senate having less and less power. This is one of the important features of Vespasian's reign.


Vespasian and the religion

There is little to say about religion concerning Vespasian. The latter did not launch any major religious reforms. It should be noted that he restored many temples and kept the ceremonies of the Augustian era.

One of the other characteristics of Vespasian's reign is his desire to rebuild Rome. Destroyed by a gigantic fire under Nero, the city had become difficult to live, especially since it had just been improved for the first time since its construction. It is indeed Nero who made draw wide streets joining neighborhoods well defined. He had also built some public buildings in strategic locations, ubbanistically speaking. But it is not that the city was pleasant, especially since there had been, under Nero, a huge fire that destroyed many buildings. Vespasian, inheriting this situation, had important works done.

The main one was political, he destroyed the Domus Aurae (Nero's Palace which he had built by appropriation of land) and built in his place the Colosseum (70-80). It was a strong political symbol because the Colosseum is a popular hotspot, built on the ruins of the Emperor's spoliator's home. Vespasian also built the Forum of Peace (71-75). In the environs of Rome he restored the temple of Claudius on Mount Caelius.


The end of his life

Vespasian dies on August 24, 79, at Aquae Cutiliae. He ruled actively until the end, except for the last days. Indeed, Vespasian dies of illness, weakened, which made him unfit for his task just during this course of time.

When one looks at the legacy of this emperor, one can only be struck by the ability he has shown throughout his reign to direct his policy towards the welfare of the people. It is a constant that followed him throughout his reign and that his son Titus, who takes over, will resume. At the death of Titus, only two years later, his brother will be much less attached to this popular well-being since Domitian is seen rather as an enlightened despot, a personality persuaded to hold the possibility to make happy his people without having to the to consult. We are here on a very short dynasty of 3 very different personalities. Judging by our modern eyes it would easily be concluded that Vespasian was a man of the left because of his proximity to the people, a shortcut a little easy for Roman emperors who, if they did not have all the powers to At that time, they still had the capacity to reduce the power of the Senate, the popular representation.

Vespasian left his son an empire in advanced reconstruction phase, the finances were back up and the borders of the Empire stabilized. The balance sheet of Vespasian is therefore rather positive.