﻿ ﻿ History of the mount Rushmore

History of the mount Rushmore

The monumental sculpture of Mount Rushmore representing 4 of the main presidents of the United States is a world famous work. Initiated in 1923 but actually made between 1927 and 1941, it is the brainchild of Doane Robinson but was sculpted by Gutzon Borglum. Nowadays it is a tourist hot spot of South Dakota, an American state that lies approximately to the North West of the United States. 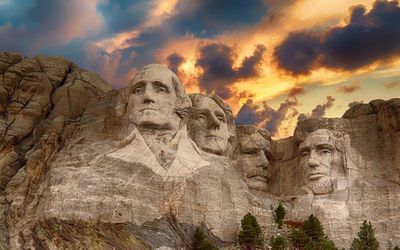 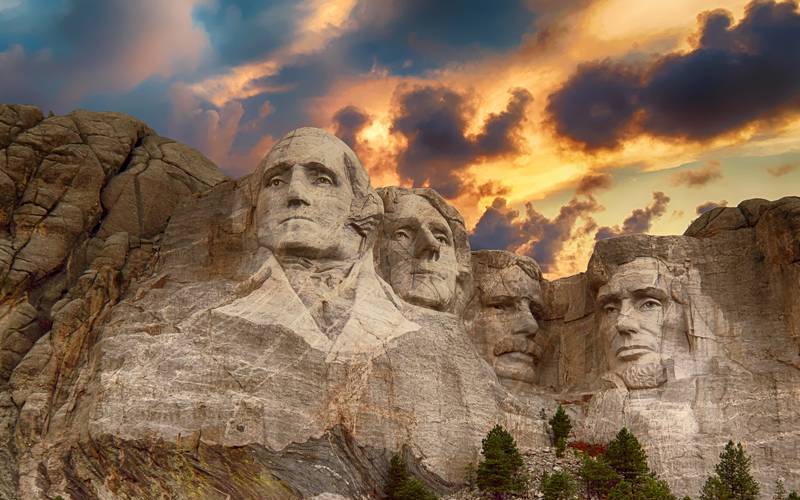 The history of the Mount Rushmore monument begins in the early twentieth century, exactly in 1923. Doane Robinson is quoted as the author of the idea that the mountains of South Dakota could be attractive from a tourist point of view. . Doane Robinson was from this state, he was a lawyer who was interested in history to the point of leaving behind the idea that he was a historian. He thought the Black Hills Mountains would be a good support for making a monumental sculpture similar to that made by artist Gutzon Borglum at Stone Mountain. It was a bas-relief depicting Thomas Jonathan Jackson, Robert Lee and Jefferson Davis, three important figures of the Confederate States, a work that is still visible today.

After trying to convince the sculptor Lorado Taft to engage in the project, it is Gutzon Borglum who will agree to embark on the adventure. However, the site of the Black Hills was not suitable for the realization of the work he had then in mind, and which will prove to be close to the final work. The reasons for abandoning the site were mainly technical since the rock was too friable to be sculpted in good conditions. Moreover, this friability gave a life expectancy to the relatively short sculpture. There were also discussions with the Indians because the Lakota, who lived here despite the plunder of land they had suffered, considered the mountains of the Black Hills were sacred, so it was difficult to attack without attracting the wrath of this important community. The choice has been moved to another mountain, Mount Rushmore.

The second stage of the project was through the US Congress. Indeed, such a monument that magnified the history of the United States could not be done without, on the one hand significant funding, on the other hand an official agreement. This negotiation phase lasted until 1925, culminated in an agreement by acting President Calvin Coolidge, and then the creation of a commission that organized the details of the project. It was at this stage that the presidents were chosen. This phase was sensitive because 4 characters were planned, but George Washington, the first president of the United States, had no political party since the political system of the country started only later. It is the president who insisted that the distribution be made for the benefit of the Republican party (2 presidents) to the detriment of the Democratic party (1 president). 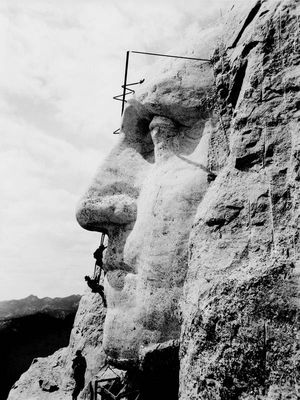 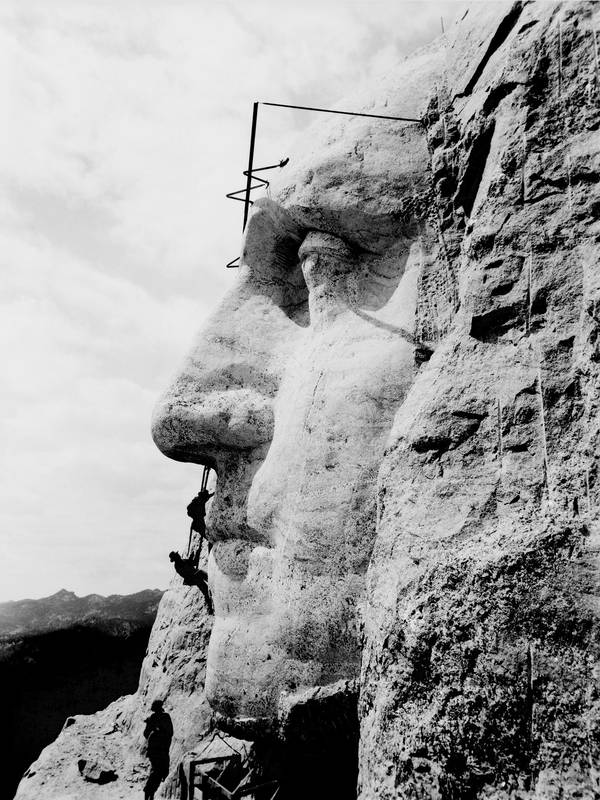 Then came the realization phase. It began with the sculpture of models. In the original model Thomas Jefferson was on the right of George Washington, but this configuration had to be abandoned at the time of realization because of the configuration of the rock, which did not correspond to the face of Jefferson. The next model thus included the 4 presidents as we see them nowadays, but with an important particularity: It was busts. Nowadays, we only see faces. This is of course due to lack of funding at the end of the face carving, the project had to stop there when we should have seen sculptures from the top of the mountain to the ground.

In 1939 Gutzon Borglum had a workshop built on the site, where he made his models and directed the operations. The sculpture began in 1927 and continued until 1941. The construction site employed 400 workers who worked either at mass, sometimes at the mine bar, sometimes at the explosive. In particular, explosives were used to destroy the work that had been done on Thomas Jefferson when it was realized that the sculpture could not be completed (1934). The workers worked harnessed in ropes to prevent falls. Working conditions were harsh, but no casualties were reported. A railroad track was built, it allowed the transportation of materials easily. Working conditions have improved over time.

In 1933 the site was placed under the protection of the National Park Service which built the first infrastructures. The project was progressing well. George Wahington was completed on July 4, 1934, a symbolic date since it was the national holiday. In 1936 it was the turn of Thomas Jefferson. Abraham Lincoln's face was completed on September 17, 1937, and in 1939 it was Theodore Roosevelt's last. The last? Yes, but it was not obvious at the time since additional funds were requested from Congress for the addition of the face of Susan Brownell Anthony (1820-1906), a civil rights activist who took part in the fight for women get the right to vote. However, this request was rejected due to lack of resources, funding officials preferring to allocate this money to finish the four existing faces rather than create others.

In 1941 the sculptor, Gutzon Borglum, died suddenly of an embolism. The monument was not quite finished yet, so it was his son Lincoln who took over the site. He completed the work of his father officially on October 31, 1941. At that time, the cost of the monument was almost $ 1 million.

Since that time the statues have not been modified, they have not been restored either. They are regularly maintained, with the regular cleaning of the faces and the removal of the vegetation that could grow there, like the moss, but that's all. As against tourist facilities have largely been revised since they date back as 1990. It was at this time that one has built amphitheater, visitor center, and especially the pathway to power s' to approach a little.

The monument has never undergone restoration itself, but it was completely cleaned in 2005, hence its present clean appearance. It was a marketing operation of the company Karcher, leader in the manufacture of high-pressure cleaners, who saw the way to advertise