A typical American monument to the glory of former presidents

The so-called "Mount Rushmore" is an American national memorial consisting essentially of four gigantic statues representing the faces of four presidents of the United States chosen for their emblematic sides. Each symbolizes a characteristic feature of the history of this country.

This is George Washington, Thomas Jefferson, Abraham Lincoln, and Theodore Roosevelt. The monument was carved between 1927 and 1941 by Gutzon Borglum, then, at the death of the latter, was finalized by his son. 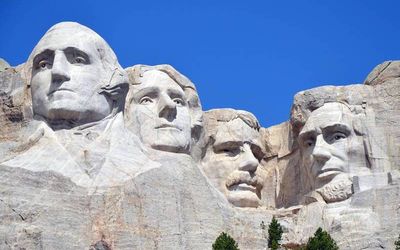 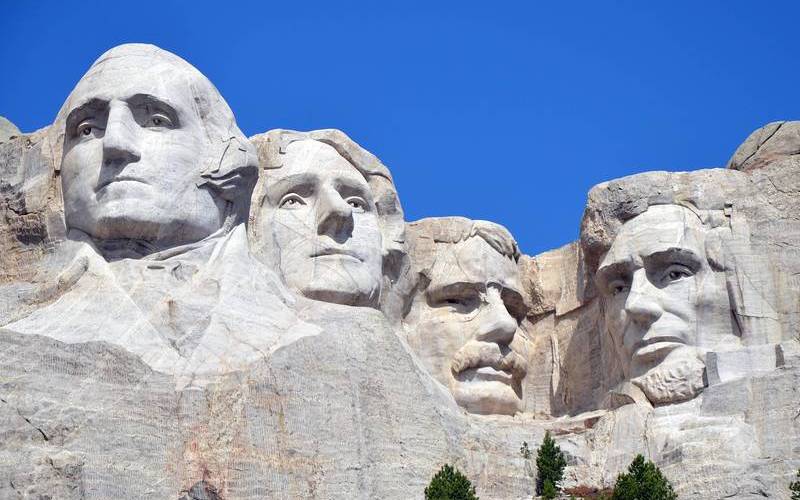 If today we can be impressed by the quality and the amount of work it took to realize this gigantic work, we must know that it is only a part of what had been originally planned. Indeed, and only for lack of financial means, only the 4 faces were carved but the monument planned to carve also the coats of the presidents, materializing their busts in the rock of Blak Hills of South Dakota. The sculpture is in the same state as in 1941, the year of the end of the work. The president who faces the visitors is the first of the United States, George Washington. If we believe the model that the sculptor made the mountain pan under his face was to welcome his bust dressed in a straight jacket with big buttons.

The faces are facing east, so they get the sun early in the morning and are in the dark in the evening. It is therefore advisable to come in the morning, although it is not essential. On the other hand, it's useless to come in foggy weather, of course.

The park consists essentially of an esplanade from which the view of the monument is magnificent, a museum, a walkway to approach, an amphitheater and various services.

When the visitor arrives on the spot it passes by a long alley known as "alley with the flags". There are 56, one per US state and one for each of the territories. At the end of this alley esplanade offers a panoramic view of the site, and this is the highlight of the visit. But we can usefully continue by taking a very easy way of hiking - in fact a small path of walk - which winds along the mountain, it makes it possible to approach the faces. This path goes through the studio of the sculptor, where we will discover the model of the initial project.

There are many mountains in South Dakota. This was called "Six grandfathers" by the Lakota, the Amerindians who occupied this territory at the arrival of Europeans. When New York lawyer Charles Rushmore passed nearby, during an expedition, he described it so strongly that his name was later associated with the mountain.

It's a granite mountain, which does not detonate in the local landscape. The nearby Black Hills Mountains are also granite. Note that Mount Rushmore is the highest in the region, a criterion of choice for the installation of statues.

Learn more about the location of the Mount Rushmore.

Of course when we see them on the spot we are quite surprised because they look very small, these faces ... But this is only an impression due to the fact that we are far enough. Once on the site, ie once the parking past, we arrive on the esplanade which offers a clear view much more impressive. From there we understand that in fact they are big enough, actually. And this impression is even stronger when, when you go up the path that approaches it even more, you are only a few tens of meters away.

Factually, this monument measures 18m high by 62 wide, all 4 faces included. So yes, it's a great sculpture ...

Learn more about the dimensions of the presidents of the mount Rushmore.

Wanting to carve the faces of American presidents in the rock is not trivial ... And it is legitimate to ask the reason that pushed the author to do this work.

In fact the designer is Doane Robinson, a lawyer who lived in Rapid City early in the 20th century and wanted to offer a monument to America's glory, and more specifically to its history. He therefore adopted the monument in the form we know him. The choice of presidents represented is not trivial: Each represents a character trait of the Nation.

Beyond this simple description there are several symbols to see in this monument, and curiously one of them is rather negative: It represents, for the native populations, a real affront to their culture. Indeed, here is a work highlighting the white colonizers of lands formerly belonging to the natives. Their descendants are particularly raised against Mount Rushmore, so much so that a representation of an Indian chief on horseback is carved a few kilometers away.

Learn more about the symbols of the Mount Rushmore