﻿ Description of the bridge of Mostar

Description of the bridge of Mostar

The Mostar Bridge, also known as Stari Most, is a marvel of architecture. It is a set of three distinct architectural elements, the bridge itself, a tower at its eastern access and another at the west access. This complex forms a fortified complex that controlled, in the seventeenth century, the comings and goings in the city of Mostar. 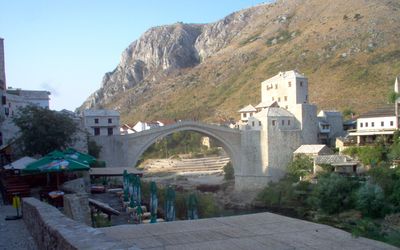 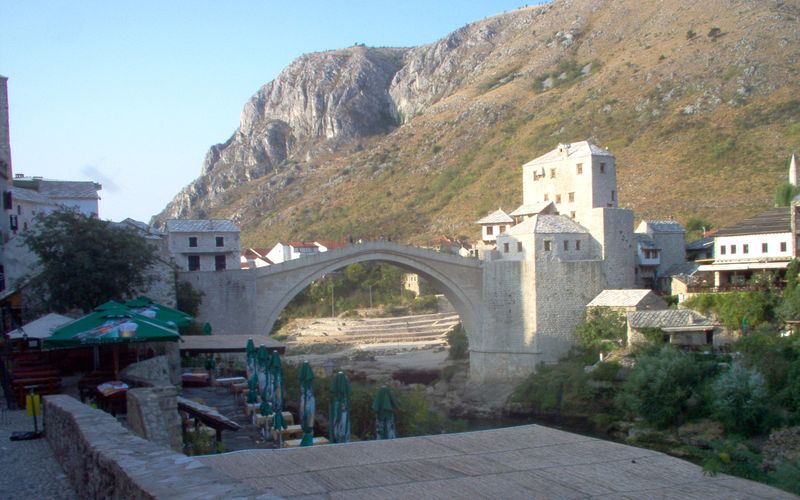 
The bridge, a marvel of architecture

This bridge is unique arch, it measures 4m wide by 29 long for a range of 27m. At its peak there is a 29m water flowing below, except when the level artificially lower due to withholding at a hydroelectric dam upstream. Having a single arch gives the bridges that are built so great strength. Moreover, this bridge, since its construction in 1566 was destroyed only once, in 1993, during a modern war using weapons capable of destroying imposing buildings. But during its five centuries of existence, it can be said that the bridge of Mostar was of great strength. 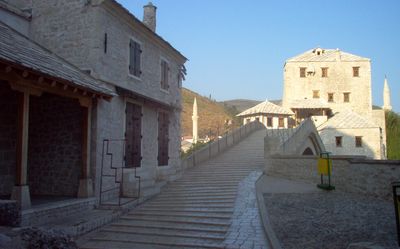 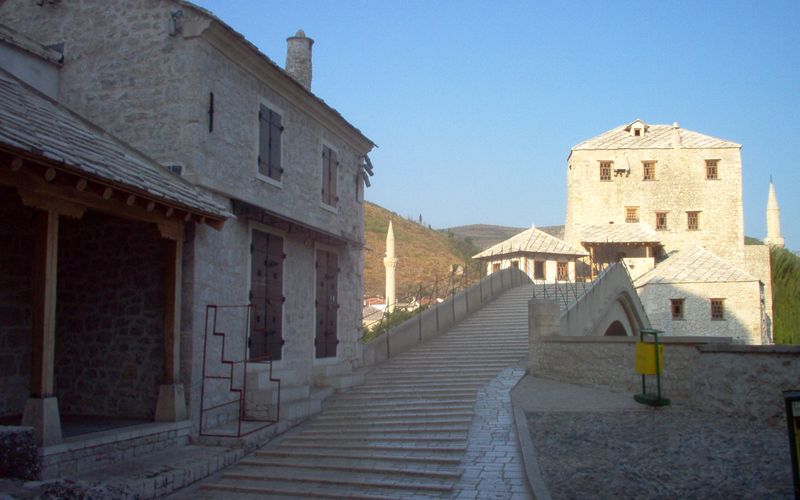 The bridge of Mostar is in fact a small staircase little marked.

More precisely, it can be said that it has a semi-circular arch, but that its railings are very slightly pointed. The stones that constitute it are of different size according to their uses, since the part situated under the bridge is made of large stones serving as support for the rest of the building, of more traditional construction. These stones are also of a slightly smaller width than the bridge itself, which marks the arch, aesthetically. Likewise, the railing is decorated with a stone line. It was initially composed of 456 heavy limestone, but now it is made of 1088 limestone blocks from the cutting of the stones which constituted it to which one added some, coming from the area.

His apron, necessarily in donkey, is in fact a staircase, like the Rialto bridge, in Venice! Although less curved than the latter, the Stari Most has narrow and low steps. The paving, recent, is rather very successful.

On the right bank stands the Helebija tower , its counterpart being, on the left bank, the Tara tower. These two towers are massive constructions, tall and wide, pierced by some modest-sized windows. These austere buildings are on the heritage protection site and are regularly restored. To be more precise, the Helebija tower is a fortified complex guarding the entrance to the bridge. It is composed of three buildings. The principal has a dungeon shape, it is he who gives the austere appearance of the whole. Topped with a simple broad slate roof, it is pierced by a few non-aligned rectangular windows. The building at its feet is of identical construction, but of a more modest height. Finally there is a tower on the northern part, tower whose roof is more aesthetic than that of other buildings. The Tara tower, which is on the left bank, is easier to describe: It is a big, tall, massive building with only a few small windows on the upper part. These fortifications could give the old town a terribly austere appearance, but the presence of many townhouses allied with the greenery of the river bed make this place a particularly pleasant place to visit. Besides, the city of Mostar is a high place of Bosnian tourism.

Geographically this bridge spans the local river, the Neretva. It is the center of Mostar and connects the two parts of the city which is nt on both sides of the river. Without the bridge, the city is physically separated in two. Moreover when we look at the map we see that the eastern part is much smaller, but also denser, it is due to the fact that this area is more mountainous than the western part, whose ground is flatter. We are in a mountainous region, the bed of the river is therefore the type of torrents, with jagged edges. It is a river sometimes tumultuous in which it is not good to swim. The vegetation, however, is dense and participates in the postcard image of the old bridge.

The bridge is rather modest. It is a beautiful work of art, but apart from its beauty, regularity and proportions, it is not particularly impressive, compared to the world's largest bridges. It is 29m long and 4 wide, and it has on each side of a defense tower. It lies to the west of the Bosnian district, the historic district of Mostar. This is a Muslim neighborhood on a right bank of the Neretva, the local river. On the other side, the shore was also held mainly by Bosniacs, but only on its southern part. In the North, and above all the city west of the river are the Croatian and Serb districts. At least that was the situation before the Balkan war.

The bridge was therefore a physical link between Bosnians, Muslims, and Croats and Serbs, Christians and Orthodox. This explains its destruction during a war that would separate ethnies.

Learn more about its dimensions and exact location.

If you are curious and want to see the bridge of Mostar from different angles, go to the page that presents them: Photos of the Mostar Bridge.