﻿ ﻿ Symbolism of the bridge of Mostar

Symbolism of the bridge of Mostar

The Mostar Bridge is relatively well known in Europe, and even beyond the borders of this continent it is not uncommon to meet people who know what it is. And yet, although pretty, architecturally speaking, it is not more impressive than other bridges, elsewhere in the world. So why is Stari Mo st as it is called locally so well known? 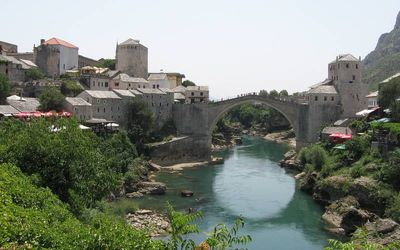 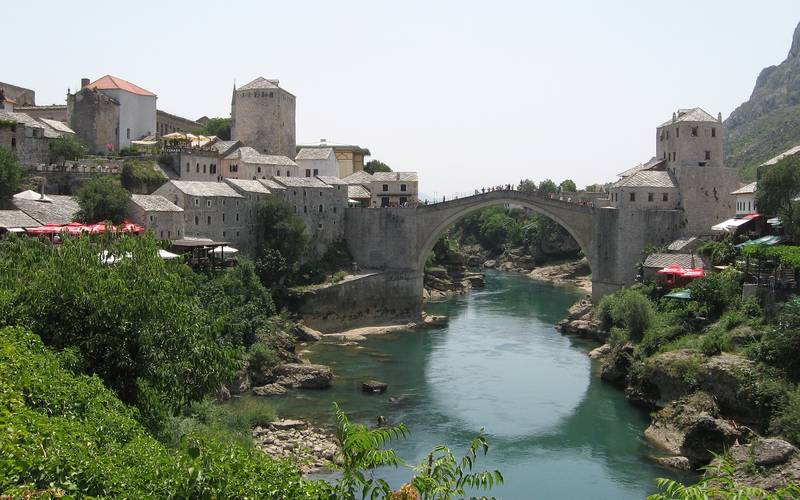 View on the old bridge of Mostar

Symbol of friendship between peoples

In fact, this bridge is the symbol of friendship between peoples, quite simply. And we have to go back to the end of the 1980s to understand it.

At that time the Balkan countries did not exist yet: Serbia, Croatia, Bosnia, Slovenia, Montenegro, etc. All these countries formed only one Yugoslavia, held with an iron fist by the dictator Tito, and a member of the communist bloc whatever he left behind . When the USSR fell in 1991, the Eastern bloc countries lost their political regimes in favor of a transitional period, before arriving at a democratic principle . Each country has gone through these stages at its own pace, but Yugoslavia was a special case because the different communities that lived there had been very strongly mixed, often by force. Each of them claimed their independence, but there were no indisputable boundaries. Especially since the Serbs had a very strong community in Bosnia and wanted to regroup all the Serbs in a big country, including those of Kosovo, Macedonia and Vovoïdine . From 1991, a war broke out between them and the Bosnians, then between them and the Croats. The objective was, each time, to challenge territories in the name of the fact that they were occupied by a particular community, even if this territory is historically the property of its neighbor.

In this powder keg, there was a special case: the city of Mostar.

Located in southern Bosnia and Herzegovina, Mostar is centered around a 15th century bridge, the only real reason for the presence of a city in this valley. Its historic district is occupied by the Bosnian Muslim community east of the city. In the West lived Croats and Serbs. But this physical separation by district was only fictitious, in the mentalities: There reigned in Mostar a great tolerance with regard to its neighbors, and the mixedness was natural . Every week many mixed marriages were celebrated s . The Mostar Bridge, of Ottoman (and therefore Muslim) origin, served as a link between all these communities, and people, regardless of their ethnicity or religion, would not have destroyed the physical and emotional connection that defined city. Mostar was the mix, it was his bridge, the two were linked.

When the war broke out and the Croats destroyed it, on November 9, 1993, it was a way of life that they destroyed, a state of mind, and not just a road feeding their belligerents with food and weapons.

It is for this reason that the Mostar Bridge is so well known: It was the symbol of friendship between peoples, quite simply. By destroying it the Croats forced the communities to separate, to deny their mix with their neighbors. In short, they reinforced their national feeling.

Once destroyed the city of Mostar was never again the same. Without the ability to communicate, and then during the war, communities as they themselves lived separate art . The inhabitants were largely displaced and the new generations grew up in Mostar without knowing the past. But between 2001 and 2004 the bridge was rebuilt, at the initiative of the European community. And it was an opportunity to try to recreate lost diversity. The bridge served as a joint yard for the apprenticeship of a trade by the young people of the city. It must be said that the unemployment rate was very important at the time (and it is still there), and the reconstruction of the bridge was an opportunity to have a job, at least a job for a few months, even a few years. The workers were chosen mainly from the population of all communities.

The Mostar Bridge was then the symbol of reconciliation. We saw Serbians, Croats and Bosnians working hand-in- hand .


Symbol of Bosnia and Herzegovina

The Mostar Bridge is also the only known historical monument in Bosnia and Herzegovina, so logically it is the symbol of the country when it must be presented through the monuments of the world. For example, the Eiffel Tower represents France, the Statue of Liberty the United States, the Colosseum or the Tower of Pisa Italy, etc. Bosnia-Herzegovina is the Mostar Bridge because no other monument in the country rivals it from the point of view of international notoriety.


Symbol of heritage in wartime

Alas this type of symbol is relatively common: Bamiyan Buddhas in Afghanistan can testify ...