﻿ ﻿ Destruction of the old bridge of Mostar

Destruction of the old bridge of Mostar

If we admit that on the one hand the old bridge of Mostar is a masterpiece of architecture, on the other hand that it resisted 450 years of conflict and bad weather, we imagine the importance of the reason why it was destroyed on November 9, 1993, in the midst of the Balkan war. So why is she? 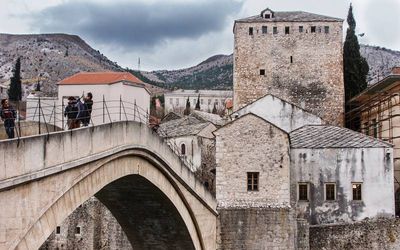 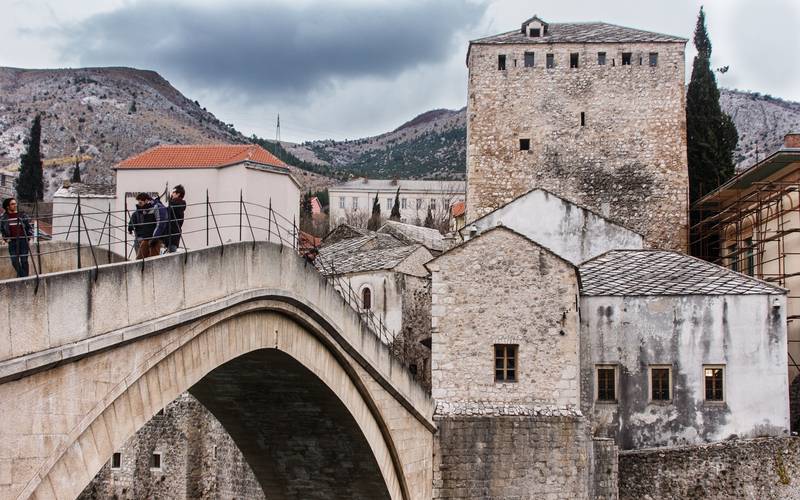 View on the old bridge of Mostar, in Bosnia and Herzegovina

The reasons for the destruction

The situation before the war

To answer this question one must situate oneself in the history and local geography. At the end of 1993, the city of Mostar, in the south of Bosnia and Herzegovina, was besieged by Croatian forces. The geography of the city is important. It is crossed by the Neretva, the local river, a large cold torrent descending from the surrounding mountains. The bed of the river is rather cashed, the river is a real natural barrier. The city was built around it, the historic center developed on the west bank while the east shore is home to newer habitats.

In 1991 the population was approximately 126,000, divided into 3 ethnic groups: Croats and Bosniacs each represent one third of the population, the Serbs a fifth, the rest being minorities. The Bosnians occupied the historic center, the Croats being in the West. But this geographical separation is a poor representation of the ethnically cultural situation of a cosmopolitan city: Communities were largely mixed, and frequent movements from one community to another. The city was a model of peaceful relations, both religious and cultural. In this spirit, the old bridge of Mostar was a link between the communities, an important link both symbolic and practical.


The causes: Strategic and symbolic

When, on 9 November 1993, the Croatian artillery brought down a few dozen shells on the bridge, causing its collapse in the Neretva, the armed forces had two objectives. The first, obvious, was to prevent Bosnians from receiving the weapons and food necessary for holding a Croat-driven siege on the historic center. The road cut, they were weakened. It was a military objective.

The second reason is symbolic, and we must not neglect it. By cutting the line of communication between the city center and the West, the Croats physically prevented the population from brewing, forcing each community to live on its land. This desire to no longer mix the local population was seen by the Bosnians as a real affront, a refusal to continue in the openness that had prevailed for centuries. By separating the communities, the Croats also had a broader purpose: to isolate them from a more general point of view, to distinguish them from the eyes of the world. Buried under years of dictatorship, the Croatian spirit of protest awoke slowly. Actions such as the destruction of the Mostar Bridge were part of this overall strategy.

And we must not believe that this symbolism is not very significant: The inhabitants of Mostar were really bruised by the fall of the bridge that forced them to separate, in fact, from other communities.

There is nothing special to say about the destruction of the bridge, militarily speaking. It started on November 8, 1993 in the evening and ended on the morning of the 9th, and consisted of a shower of artillery shells. Little by little the bridge collapsed in the Neretva, the local river, and was everything. The population could only see the damage in the early morning.


The effects of destruction nowadays

The destruction of the Mostar Bridge has not only had immediate consequences, but even today its effects are felt. Indeed, once the war ended, the population of Mostar changed dramatically. The Croats left the city massively, and the Serbs followed them to a lesser extent. Old neighborhoods with distinct populations still exist, but their identities are lower. But above all, there is much less diversity in the city, the populations remain largely in their neighborhoods, whereas before the war they did not hesitate to move. The bridge, although rebuilt, has become an invisible border between the Bosnians living in the West and the other communities in the East. It is little borrowed, daily, by the local population, thus marking little willingness to go to meet other ethnic groups. In this, the coup attempted by the Croats at the end of 1993 worked perfectly: The ethnic groups are separated, more isolated than before, and it is therefore easier to distinguish them from each other, bringing the old unifying principles into oblivion. Yugoslav.

The other consequence is that the Mostar Bridge has become a well-known international symbol. It represents reconciliation between peoples and is put forward to show the possibilities of bringing together two opposing groups, whatever the place and the time. But it is a forced symbol because on the spot, the reality is rather opposite.