﻿ ﻿ The statue of Liberty

The statue of Liberty


The Statue of Liberty is a monumental sculpture erected on Liberty Island, a small island at the entrance to the port of New York (NY, USA). Its official name is "Liberty Enlightening the World." This is one of the most famous sculptures in the world, it was a gift from France to the United States to celebrate the centennial of the Declaration of Independence. 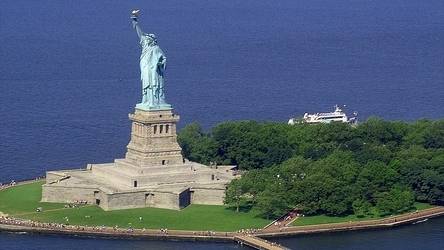 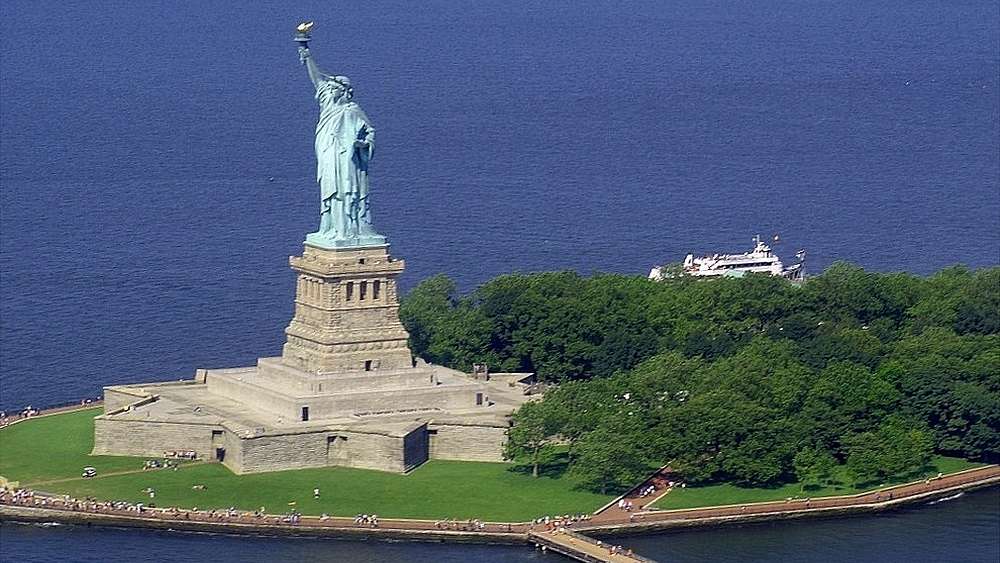 The Statue of Liberty, standing facing the Ocean


The Statue of Liberty belongs to the "National Park Service" since June 10, 1933. It is a US federal agency in charge of protection of national parks, national monuments, and other historic sites of national interest. It is classified in 1924 "National Monument" of the United States, and it was registered in 1966 in the National Register of Historic Sites, always in the US of course. In 1976 she joined the remarkable sites of New York and since 1984 it is a UNESCO World Heritage Site.

Measuring over 46m high but appearing more because it is perched on a pedestal of her own height, the Statue of Liberty is a monumental sculpture located on Liberty Island, a small island in New York Bay. France has offered it the United States in the late nineteenth century, the inauguration went on October 26, 1886. Since then it has been the symbol of a wide range of topics, essentially related to the hope, the imigration or freedom.

See also: Description of the statue of Liberty

The Statue of Liberty is embossed copper, it is made of 300 copper plates that have been hammered until they espouse a particular form defined in advance. They were then assembled on a metal structure, a kind of scaffolding fixed on the inside of the statue which ensures stability, retention and resistance to strong sea winds. The plates were riveted very precisely to prevent the rivets from being seen from outside. The construction took nine years, from 1875 to 1884, she was held in Paris, in the workshops "Gaget and Gauthier" copper work specialists. The statue was mounted for the first time in central Paris for almost a year, to ensure that all parts can be assembled easily. Then it was disassembled, put aboard a warship to be transported to New York, where American workers have reassembled it.

See also: Construction of the statue of Liberty

The main difficulties that have been encountered mainly concerned the financing of the monument, because if the statue was the responsibility of the French, it depended of the Americans to be constructed. But they had not requested the construction of this statue, they also had difficulty accepting pay its pedestal. It took the intervention of Joseph Pulitzer, editor of the newspaper "The World", to give a show of solidarity to the project sponsors. Through stories he magnified the strength of the monument, and so the middle class accepted to give for the construction of the pedestal. The upper class, especially that of the east side, the more concerned, had not responded to requests for funding. At the time, it was normal that a rich person don't gives her money to such a cause. Still, it is thanks to Joseph Pulitzer that US funding was completed. On the French side, if funding was not so easy to find, it was still relatively quick, the French people was excited to build this statue. There was a lot of communities that gave to the greatness of France, this feeling was very important in the mid nineteenth century.

Another difficulty appeared to build the statue: The shortage of qualified work, to work in the workshops. The mid-nineteenth century corresponded to the beginning of mechanization, which was popularized in the following decades. At that time the craft was still the most classic way of working, but finding workers capable of working copper was difficult, so find dozens, it was even more difficult. Where difficulties Auguste Bartholdi, the sculptor, couldn't advance her project as he wished.

But the construction of the Statue of Liberty was also a fantastic achievement in several areas.


The reasons for success

Technologically the statue is quite a feat, especially with the knowledge of the time. The principle of embossed copper was already acquired, but it was never implemented for a monument of this size. The expansion principle was also difficult to use. The sculptor Auguste Bartholdi created a 1.20m model, which has served to construct an intermediate image of 11m50 (which served as a model replica of the Paris Pont de Grenelle, on the island of swans). This model was cut into 12 sections, all measured at many points in the three dimensions, and then transferred onto a plaster model built from the expansion steps. Once fully developed, the model plaster was used in the construction of a wooden template, in negative, on which the workers hammered copper plates. This chain of construction parts, if it were unsophisticated, was pragmatic and has proven to be extremely effective.

Furthermore the establishment of relations between France and the United States is also a source of satisfaction. Indeed, at the beginning of the sculptor project had little contact with a few Americans, all of them Edouard de Laboulaye knowledge, politician, lawyer and pro-American. It was he who was originally the idea of ​​the construction of the Statue of Liberty. Despite these small contacts, Auguste Bartholdi went there and wove sufficiently strong ties to the project can be started, continued and came to end. This ability "to move mountains" is to the credit of the partisans of the statue.

The Statue of Liberty is intended as a symbol of freedom, of course. Yet it is far from being as it was perceived over time. Initially it was build to highlight the value common to all human beings, but the reason is more pragmatic: Facing the authoritarian government of Napoleon III, a group of French Republicans decided to put forward the idea of ​​Freedom peoples ... and more particularly the French people, while stressing the Freedom that was gained less than 100 years before the American people. This notion was already not shared by the Americans, who did not see the interest of magnify the collective freedoms, themselves, already champion of individual freedoms. But it is especially in the years 1880-1900 and 1920-1930 that Liberty has become the symbol of mass immigration in the United States. At this time, it had a negative connotation, Americans saw it as a symbol of the invasion of their country by Europeans. This feeling has disappeared with the economic revival of the country, and with it the statue is returned to creep by New Yorkers. When it opened in 1886, the statue was taken hostage by the Americans, who felt just as excluded in society, but also by the black community who had just received the end of slavery, this who had not yet changed attitudes. Besides segregation was applied during most of the twentieth century, African Americans do not necessarily seeing the Statue of Liberty hope.

So we see that all these symbols intersect over time, the statue has been used many times to defend various causes, and that to this day she is in the eyes of most Americans, the symbol Liberty they bring in the World. A recent survey, however, shows that only 2% of Americans know that Miss Liberty is French ...

Otherwise, even the statue contains various symbolic elements: The broken chains of slavery, often ignored when a replica of the statue is made, the tablet is marked with the date of American independence, its torch illuminates the World (Illustrating the official name of the statue: Liberty Enlightening the World), and her tiara consists of 7-rays corresponding to the 7 Seas and Oceans and 7 Continents such that counted at the time. There are others symbols explained in the web site.

More details on: Symbols of the statue of Liberty

In the United States, in 1950, an industry has teamed up with Boy Scouts of the time and launched the operation Strengthening Freedom arm, an operation that led to the erection of 200 copies everywhere on the US territory, including the islands of overseas territories. Today there are still a hundred, the most referenced on this site.

Today the visits are particularly well done, but it has not always been the case. It must be said that Auguste Bartholdi did not anticipate that tourists would come to visit her, even when she was built. The island was built twice, first in the 30s, a second from 1984 to 1986. It is this development that is used these days. The tour includes a walk on the island, the entrance to Fort Wood, the former military fort at the center of which was built the base of the statue, the museum and climb the stairs to the top of base from where one has a splendid view of the bay of New York ... and under the dress of the statue! Indeed, the designers of the tower have put a glass ceiling at the top of the pedestal, to see the internal architecture of the statue. It is Gustave Eiffel who made it (initially, because it was completely rebuilt in 1986). Finally for the brave three hundred steps await the intrepid who want to ride the small narrow staircase staircase, which climbs to the head of the statue, with views of nearly 100m high on the skyline of New York. A great time for those who have the opportunity to get up there, which is not given to everyone because you have to book your ticket several weeks in advance.

Please note that access to the monument tickets, whether or not the rise in the crown, allow the free tour of the immigration museum on the neighboring island of Ellis Island.

Explains: How to visit the statue of Liberty

Discover the Statue of Liberty, its dimensions, its scopes in the World, her sources of inspiration, symbols, stories, and more.

Tips for the lucky who will go there to visit, information on tours, getting tickets, and discovering what there is to see in the museum.

The Statue of Liberty was a fantastic story. The idea of this grandiose project to date, they will have experienced many events that make light of the XIX, XX and XXI century