﻿ ﻿ Diving contest at the Mostar Bridge

Diving from the Mostar Bridge

Every year in Mostar, at the end of July, a diving contest is organized from the top of the bridge. It is a kind of tradition that has been transformed into competitions since at all times the young people of Mostar compete with courage by jumping in the river from the height of its 29m. 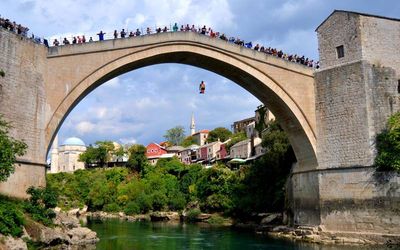 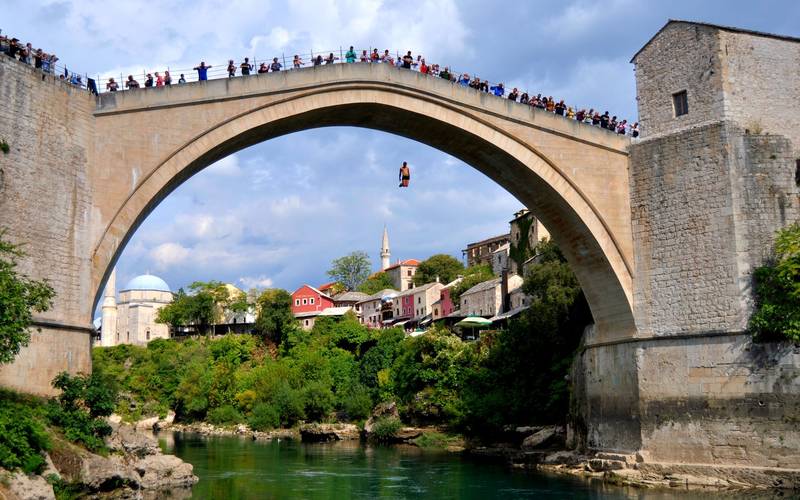 Diving contest from Old Bridge in Mostar, Bosnia and Herzegovina

Gradually these jumps were framed, if only to limit accidents. Thus it was in 1968 that the first official diving competition was organized from the Mostar Bridge. This event did not happen every year, but since the end of the war, the pace is much more regular.

Since 2015 this competition is even supported by the company " Red Bull", which promotes extreme sports. And it must be said that an extreme sport, it is indeed one. In 2019 the Mostar Bridge hosted the 6th stage of the Redbull Cliff Diving , a diving competition that brings together the best athletes in the world through mythical places.

It's always impressive to see these professional divers compete with acrobatics to make the best scores ... The fact that they are always in interesting places is just as impressive.


The dangers of such a jump

Every year accidents happen because of carelessness. The first imprudence is that of jumping while the diver is not ready, physically and psychologically. Because one must beware: At 29m height, when the body enters the water, there is a physical phenomenon of compression of the spine. The part of the body that is in the water is suddenly slowed down compared to the part that is still outside. Result, the vertebrae are packed. If the diver does not have solid muscles, or if he has the misfortune to enter the water at an angle other than 90 °, his body will bend, causing paralysis sometimes irreversible. As a result, only athletes accustomed to this type of exercise are entered in the competition ...

Moreover even the specialists are regularly victims of accidents: Broken ribs, strains, twists of the ligaments, it is unfortunately the repercussions of the pleasure to fly ... 3 seconds. 3 seconds which are enough to enter the water at almost 90 Km / h! And of course, there are other risks of accidents, but these are more preventable. Diving can only be done when the level is high in early spring. In summer, the water level drops, there is more snow melting to feed the river. In winter we could do jumps, but the local, mountainous geography, proves that the winters are rough ... There is more chance to get a block of ice than a rock, but if you manage to avoid it it's drowning, anyway ...

However, if the heart tells you, and if you take responsibility, you can make your dip in the river. It is an activity organized by a local jumping club, Bridge-Divers' Clubhouse. In 2018, it's 25 € to be scared ... or to risk an accident.