﻿ ﻿ The statues of Easter island

The statues of Easter Island are large human representations cut in the volcanic rock of Easter Island, an island off the coast of Chile that has the distinction of being the most remote island of any land. This originality that makes this piece of Chilean territory particularly isolated was inhabited by an island people came by sea in the early twelfth century. These statues are called " Moais ". 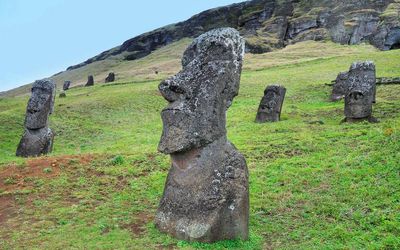 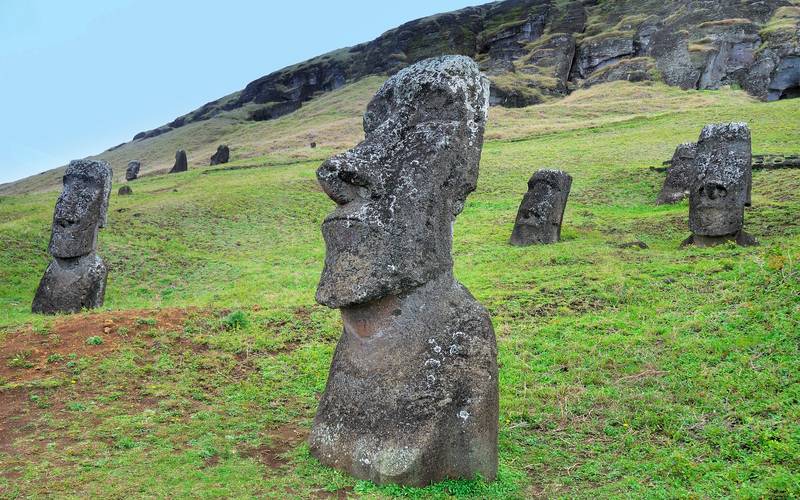 The first inhabitants of Easter Island arrived at the beginning of the 13th century, perhaps at the end of the 12th century. They came from the Polynesian islands and imported them with ancestor worship, worship which Vener have ent previous generations. This is the origin of the Moaïs, the statues. They began to carve in the volcanic rock representations of these ancestors. The first statues were human-sized, that is between 1m50 and 2m high, but soon there was a race for gigantism and in the great period of construction that lasted until the 15th century, the Moaïs measured 7 to 8m high. They consist of a body and a head sometimes surmounted by a strange red rock hat. The eyes were painted for more realism.

The statues are divided by group most of the time, but sometimes they are isolated. They are located along the coast and are oriented inland.

Learn more about the statues, their dimensions, their locations, the history of moais.

If we look at the history of humanity, the settlement of Easter Island was very late. It was towards the end of the 12th century, or the beginning of the 13th century, that it occurred , from peoples of Polynesian navigators who discovered the island. They are the ones who built the statues of the island. At the beginning of the fifteenth century the cult changed abruptly, without our knowing the reason. Still, the cult of ancestors, originally statues, was abandoned. The statues being cut remained in the quarries. This was the starting point of a new era involving a new social order.

Easter Island is the farthest island of all land, its nearest neighbor is about 2000km away. It is a volcanic island, created by 3 volcanoes whose craters are perfectly visible. Initially forested island has gradually been cleared at the rate of building statues, each requiring some tree trunks for their transport. Not to mention the classic use of trees for everyday life : habitat production, heating, protection, etc.

Another feature of this island is the lack of court s of water. As it is relatively small (about thirty kilometers in length and 20 in width), the water that flows there can not form riverbeds. But without water, there is no life possible. Fortunately the people who arrived there, around the twelfth century, could eat water thanks to the lakes that formed inside the craters of volcanoes!

Easter Island can be visited, of course, but it's not so easy to go there. The main reason is, of course, the remoteness of the island, but that's not the only reason. In fact the Chilean government to which this piece of territory belongs has put in place strict rules regarding the reception of tourists, and this in order not to destroy the fragile resources that are on site. The main city, if not the only one, has just over 3,000 inhabitants and tourist facilities are voluntarily limited to 200 visitors a day, no more. This is the quota imposed on the spot, and which is easy to implement since the visitors arrive almost exclusively by plane. The number of flights being limited , the authorities have no trouble controlling the flow of visitors.

Of course if you plan to go to the island, make sure you have planned your entire trip, accommodation, tours, etc. It should not be that once there you discover that what you want to see is impossible for this or other reason. The good news is that it is relatively easy to admire groups of Moais, especially those who have been equipped for tourists. Others more distant are more difficult to access, but one in the other it is still quite simple to find, if we move a little off the beaten track. Beware, however, there are very few roads on the island, and it is still about thirty kilometers long.

Learn more about how to visit Easter Island.