﻿ ﻿ History of the statues of Easter island

History of the statues of Easter island

The history of Easter Island is relatively simple to approach, because it starts relatively late compared to the stands that can be found elsewhere, and it has almost an end date. Everything begins around 1200 and ends at the end of the nineteenth century, and the history of the island has three major phases: A colonization of a Polynesian people (1200-1500, the origin of the Moais), a change of behavior which imposed a new social structure (1500-1687, which made disappear the Moaïs) and the island as stake of the Europeans (1687-1877). From there the original settlement of the island is so weak that it can be considered as having disappeared. The population believes again, but under the action of immigration. 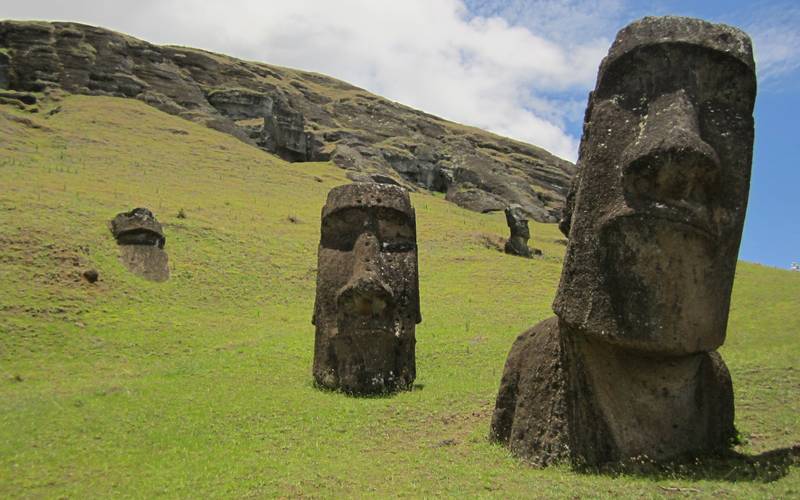 
The initial settlement and the erection of Moaïs

Before 1200 there was no human settlement of Easter Island. Of course unknown to the Asian, European, African and Micronesian civilizations, the island of 160 Km2 only was discovered by the Polynesian civilizations only at this period. Although this period is questioned by scientific analyzes done on the spot during the nineteenth century, in practice, the more recent and accurate the analyzes, the less doubtful the settlement of Easter Island has been. around 1200. These migrants probably had to arrive from Mangareva, the main island of the archipelago of Gambier, but we can not exclude an arrival by the other nearest islands: Marquesas Islands or Pitcairn.

Once there, they organized themselves into territorial clans. At the time there were about ten clans that divided the territory into triangular pieces starting from the center of the island. Where all the territories joined was the common territory, where one could discuss the needs of all the clans. Each clan had its villages, a little behind the coast. It was villages of stone houses with common buildings and a social structure turned on the worship of the ancients. The cult of the ancients is a worship that has no gods, it is content to worship the ancestors, a tradition that aims to ensure the oral transmission of the history of the people in question.

The Moaïs are a representation of the ancestors, they are idols in charge of the protection of the island and as such they were placed all around the island. There is also a large number of places of worship on the coast. These statues were installed between 1200 and 1500, the period of belief in ancestor worship. From 1500 an event arrived, upsetting the established society. This date of 1500 is of course very arbitrary, the change having occurred perhaps a little later, sometimes we even announce the 17th century

It was not a sudden upheaval that caused the change in Easter Island society around 1500, but rather an awareness - probably forced by the facts - that the relatively small island could not provide. food to the whole population if the latter did not deal with the problem of the ecosystem. Indeed, in addition to having to deforest for food the inhabitants had to cut the trees to build the Moais, to transport them, carve them, etc. Without trees, the ecosystem was disrupted, food became scarce and part of the population had to leave. Specialists found traces of Pitcairn Island settlements from that time, proving the migration of part of the population. However, this hypothesis has never been proven, and deforestation could very well have happened later. As always, there are surely several factors that have had to intervene, and have excluded neither internal wars, which could have destroyed most of the population and therefore need the establishment of another society, nor natural disasters. they, too, can put on base a civilization so fragile.

To face the problem, and whatever the cause, a simple solution was found: The cult of the ancients was replaced for the benefit of a God, Make-make , the bird-man. The Moais were abandoned, some were willingly laid, others buried. The main quarry in which they were carved was also abandoned. It should be known that there were as many statue in the process of manufacturing as statues already erected, or 400. All those in the process of manufacture were buried, covered or simply left as is. The old places of worship were abandoned. The new society that appeared was spontaneous, it was based on the previous one. A new caste of priests was born, and this new organization was able to resist the extreme island conditions imposed by the geography of the island, and that until 1687, year of the discovery of the island by the pirate Edward Davis.


The harmful influence of Europeans

If Edward Davis was the first to discover the island, he did not disembark, unlike Jakob Roggenveen , a Dutch sailor who acted for the Dutch West India Company. It was he who gave it its name: Easter Island, by the fact that it was addressed April 6, 1722, Easter Sunday.

The second European to approach the island was Felipe González de Ahedo who took possession of it in the name of the Kingdom of Spain. It was November 15, 1770. However he did not know that it had already been discovered and therefore already belonged to a European kingdom, the Netherlands, which claimed it and obtained it.

James Cook made a stop at Easter Island on March 13, 1774, and then the French navigator La Pérouse in 1786. These increasingly frequent stops on the island set up a mechanism that the local population could not guess. namely, its slow eradication by the development of unknown diseases for which it had no natural antibodies, and its abduction to turn them into slaves. This happened in the mid-nineteenth century when traders from South America raided the island to capture as many people as possible to work for their accounts.

The population of the island probably never exceeded 2000 people, when it increased it was naturally limited by the lack of food resources. Once the raids were done, the population was too small to survive. In addition, the people behind these kidnappings took the opportunity to eradicate the culture of the island by suppressing priests and destroying places of worship. The date of 1877 is symptomatic, it corresponds to the smallest population of Polynesian origin that the island has never reached: 111 people. But since the middle of the nineteenth century other populations arrived, forming a mix that will not cease to matter. It is this mix that will save the population on the island and will make that there still exist, today, descendants of primitive people on the island. The migrants coming mainly from Tahiti and the southern islands for the majority of them, from Europe and for a tiny part, from China.

At the end of the 19th century, several Europeans settled on the island, which was then Christianized, and a new organization was set up. In 1888 Chile officially annexed it, and nowadays it is still a Chilean territory.