Easter Island is a Chilean island in the Pacific. It has the distinction of being the most remote island of all inhabited lands. Its closest inhabitants are 2078km away, on the island of Pitcairn, to the east. The second is 2,829 km, it is Alejandro Selkirk Island. Tahiti is more than 4000Kms away.

It measures 24Kms long and has a triangle shape, for an area of 162Km2.

Its relief, not very rough, is made of three massifs including two volcanoes. There is a third volcano, smaller, these three volcanoes forming a straight line along the longest side of the island. The highest point is the Maunga Terevaka , with 507m of altitude, but the average of the island is much lower. Its landscape consists mainly of medium mountains, low hills, rounded, eroded by wind and frequent rains. Its ribs are usually shredded. 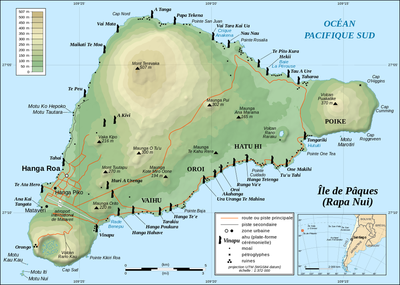 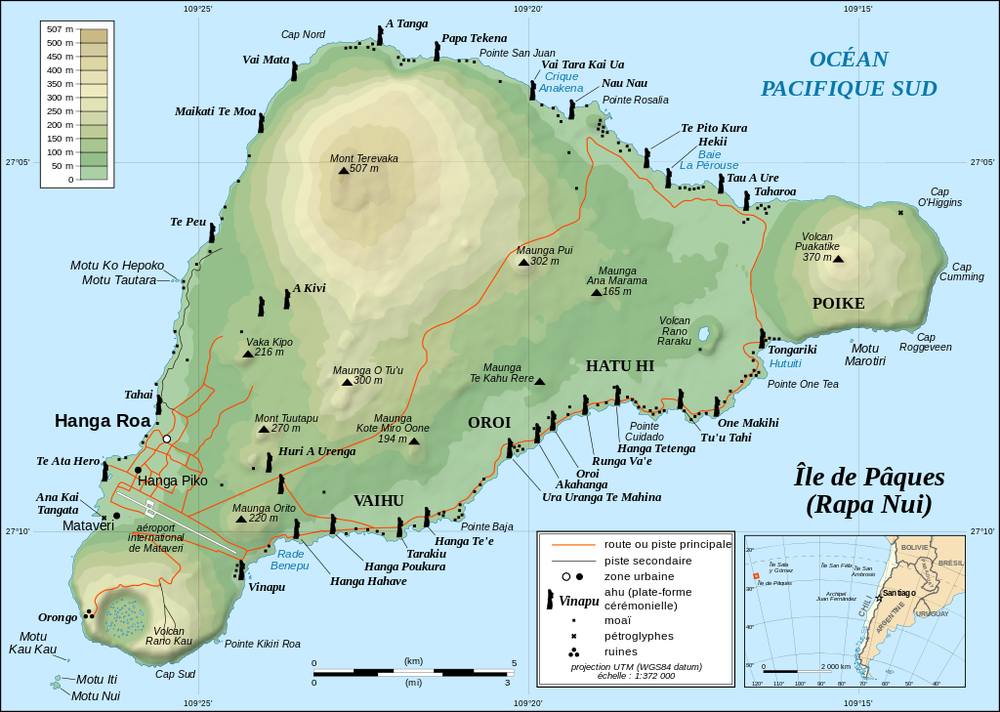 The vegetation is razed: It is the heir to the human activity which has eradicated little by little the local resources. There were forests at the time of the arrival of the first inhabitants, around 1200. They had reduced to the arrival of the Europeans and do not exist at all nowadays. It is the need to cultivate land (for locals) and the opportunity to raise livestock (for European settlers) which has favored deforestation. Do not neglect the destruction of trees in order to build the Moais, but declare that this is the origin of the extinction of dense vegetation of the island is a mistake. This is undoubtedly an aggravating factor, but perhaps not determinative.

The island is small, from the hydrological point of view it would have been normal that it does not have any river. This is indeed the case, at least permanently, but there is in the crater of each of the three volcanoes a large water reserve which has ensured the water supply of the inhabitants at all times.

In addition, the climate being tropical rainwater is partially captured.

Easter Island is volcanic, so it is made entirely of volcanic rock. Three volcanoes run along the longest coast, but it has many other smaller craters. The stone is essentially basalt.

The island is under the subtropical climate. It rains frequently, especially during the austral autumn (March to May). The temperature is not that high , but it is fairly constant: between 16 ° (during the austral winter, in July and August) and 28 ° (in February)

Administratively the island is managed by Chile, the nearest country. It is part of the Valparaiso region. It is occupied by a little over 6000 inhabitants, this figure varying slowly upward or downward, depending on the decades. Its capital is Hanga Roa , home to most of the population. It is a simple town made of low houses with lush gardens. It has hotels and restaurants, various shops, a library.

The economic activity of the island is mainly oriented towards tourism, but the fishing is also important and ensures a part of the supply of the population.