﻿ Description of the statues of Easter island

Description the statues of Easter island

The Moaïs nowadays look a little different from what they used to be. First of all, you must know that the stone they are made of, the tuff, is gray-yellow, but the weather has made them much darker than when they were cut. Then we often have the image of a head, a simple head, to represent a character. It is not so since all the statues are complete characters except the legs. They all have one body and two arms, often terminated by hands. One of the reasons that puts the head forward is that it is disproportionate to the body, much smaller than it should be. The Moaïs were almost all carved in the tufa of a career of Rano Raraku volcano , the most eastern of the island. Its slopes are also dotted with statues, is the classic image we have when we think about the Easter island. 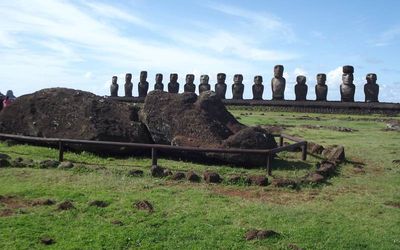 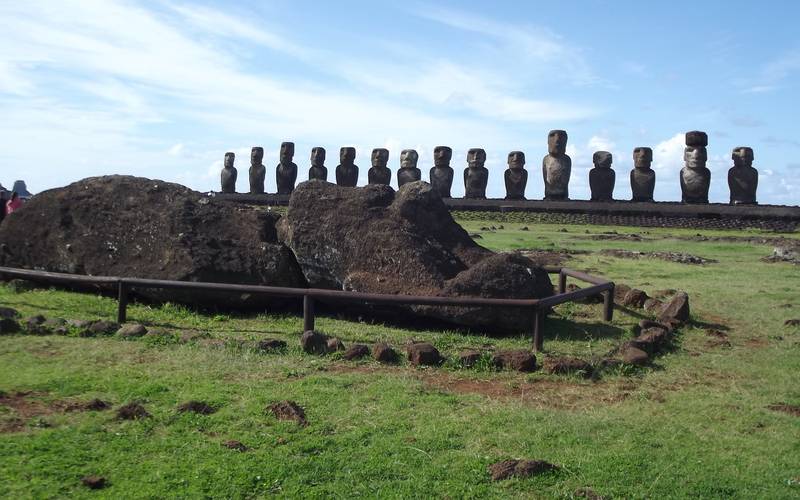 These are statues in the round, that is to say that we can go around (unlike low or high relief). The main characteristics of Moaïs are a weak neck, a rectangular face, the prominent chin and the strong nose. The ears are disproportionate and the forehead is fleeing. The eyebrows are also particularly marked.

The arms are often in two parts, as on a human being, that is to say that there is the angle of the elbows. The belly is sometimes prominent, suggesting that it is a woman. This is the only characteristic to give a kind to statues.

Some are wearing a pukao , this is the name given to these strange cylindrical hats. They are made of red tuff, a stone extracted from the quarries of Pau Puna, a site near the capital Hanga Roa and which has the distinction of having the only quarry of red stones on the island.

Nowadays their expressions are fixed, the looks are empty, but at the time of their splendor the eyes of the statues were richly decorated. The white of the eye was reconstituted with white corals and the irises were made of red tufa, like the headdresses. Sometimes they were obsidian, a volcanic rock (of course) vitreous and very black, a little translucent.

Moais are sculptures in the round, which means that we can go around. They are carved out of volcanic rock in a Rano Raraku volcano quarry . This quarry is in the South-East of the island, it is the main quarry from which came out almost all the statues. 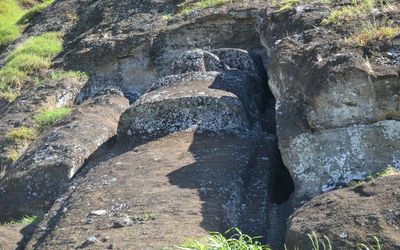 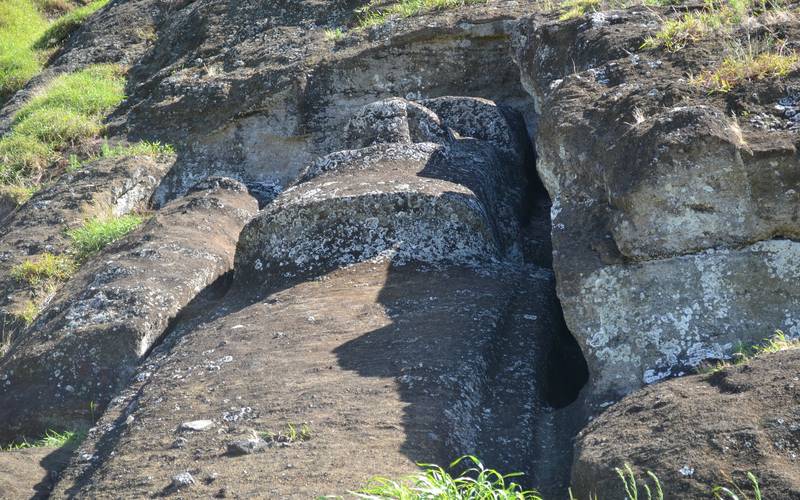 The work involved cutting the shape of the statue in the rocky soil and refining the lines. The waste produced was thrown on the spot, without any problem of recovery or evacuation of cut pieces. When the statue was finished on all three sides, the sculptors began to carve under it, to detach it from the ground.

Some were cut not in the ground but in the cliff, at ground level. The sculptors entered the rock, at the risk of seeing the ceiling collapse. Once the block was removed the cliff presented a hole at his feet, a kind of artificial cave.

The career of Rano Raraku was abandoned brutally, as evidenced by the many statues left in the course of sculpture. Their number is eloquent: There are almost as many moais being cut on the island! (400 being cut for 887 on the island, an approximate figure because some moais were barely sketched, the specialists do not necessarily count them all in the same way)

A pukao is the name given to the moai hat. All are not filled, but those who have are characteristics, figure s are much more s than their neighbors. The Pukao is a tuff block cut finely enough red cylinder.

The red tuff quarry is not the same as for the moais themselves, it is in Puna Pau, a volcanic cone providing a red stone.

It has long been wondered how the men of the thirteenth century were able to transport the moais and their pukao for several kilometers, on hilly terrain, moreover.

Various attempts were made during the 20th and 21st century, on the spot. One of the first solutions proposed was to slide the statues on logs. This solution had an obvious advantage: It could explain why the island was deforested. But it seems that this is not the right solution, they had to do otherwise.

The solution that is most plausible today is that the statues are moved vertically, by successive rotations on its base. Each move made it move forward by the width of its base, about 2m. To maintain verticality during transport, it was necessary to hold it with tense ropes held by the force of several men. The relatively recent tests that have been done have shown that it was possible to move Moaïs for several kilometers at a very low pace. They had to meet at their sites in several months, and required the presence of twenty men. Of course, these figures are very variable depending on the size of Moais.

When a moai fell to the ground it became impossible to raise it because of its weight. He was then abandoned on the spot, as is. Some were still undergoing straightening attempts, a hole was dug at his feet large enough to tilt him, then he had to resume the technique of moving on an inclined ramp to get him out of his hole. Tests that could - conditional is necessary - explain the presence of Moais semi-buried , or lying on the ground, everywhere on the island.

The implantation site was not insignificant, it was decided well upstream of the beginning of the cutting. We built a Moai for a specific reason. The sites of implantation were of two kinds: Either it was an ahu , that is to say a ceremonial platform, generally occupied by several Moaïs, or it was an isolated site.

Once in place his base was reinforced and his pukao was put in place. A Moai was still looking at the island, with one exception.

The pukao came from another career, but it was not cut in the quarry, unlike Moaïs. The red tuff block was just cut into a cylinder and rolled up to the Moaïs site. Only then was it cut to fit the statue. It is the many traces of cutting under the cylinder that teaches us, if the block had been pulled to the ground, these traces would have been removed, which is not the case.

There remained the problem of the installation of pukao . Again, different theories are opposed, but one of the most likely is to think that the inhabitants of the time were raising a levy to the head of the Moais, until partially burying. At the top, they planted a sturdy stake and passed a rope on either side of the stake. The ends of the ropes were passed under the pukao and returned to the picket where men, pulling, could pull it. At the top, the pukao was adjusted, and the earth removed .

This method was very complex and required a great deal of work, but so they achieved their ends. 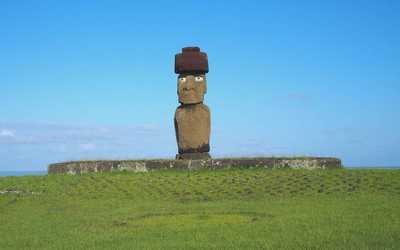 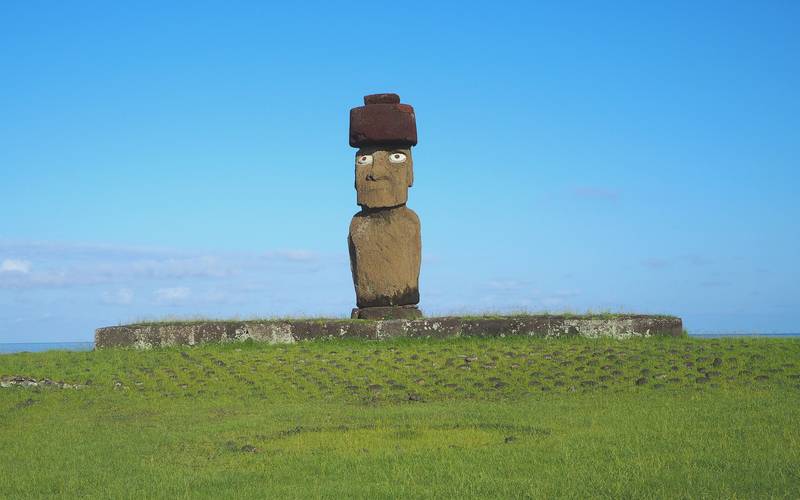 Once in place the work was not completely finished since it was necessary to finish the Moaïs. The finishes consisted in setting up his eyes, it was said then that he found the view.

In practice, it consisted in putting on the eyes pieces of white corals to simulate the whiteness of the eye, and in the center of making two small circles, the irises, in red tuff or black diorite.

Such a setting has been recently redone, and one of the Moaïs nowadays exposes his face as it was 500 years ago.