﻿ ﻿ Origin of the statues of Easter island

Origin of the statues of Easter island

The statues of Easter Island are called Moaïs. These are colossi of stone, mostly erected vertically, often by group, on Easter Island, a Chilean island in the Pacific. This island is only known for this particularity that exists nowhere else. 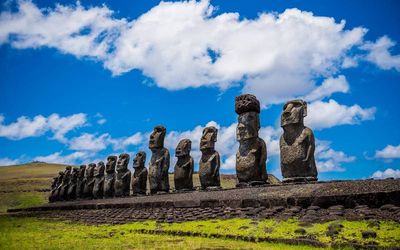 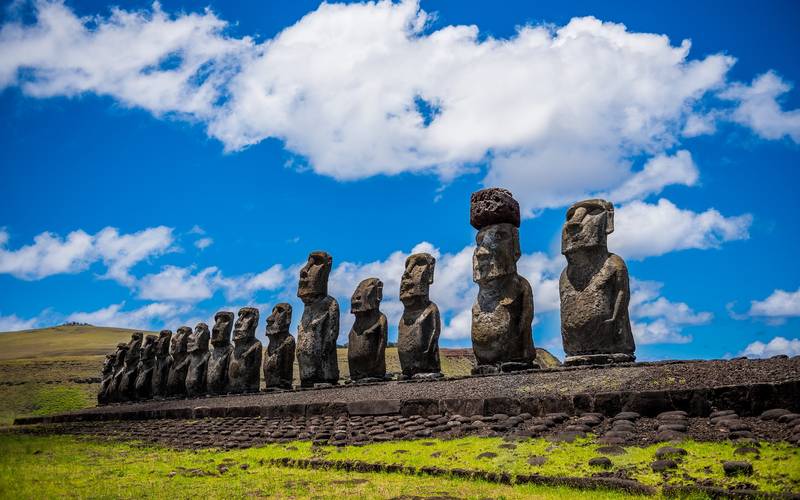 First of all, you have to set the scene.

These statues are not as old as one might imagine: They were all erected between 1200 and 1500, approximate dates corresponding to the arrival of Polynesians on the island (around 1200) and the abandonment of the cult ancestors (around 1500, maybe a little later). It is a period of 3 to 4 centuries during which the inhabitants cut and erected his statues before abandoning them.

Easter Island has the particularity of being the island furthest from any human habitat (2078Kms for the nearest neighbors). It is rather small, with an area of 165Kms2. It has a mountain (507m high), the highest point of the island, and 3 smaller extinct volcanoes, plus a lot of geological curiosities related to volcanism. At the time of their arrival the vegetation was varied, with forests and meadows. Nowadays there are only meadows left.

That said , the Polynesian community that came on the scene organized themselves into clans. Archaeologists have found traces of a territorial division of the island by radiation, that is to say that the center belonged to the entire community, but each clan had a triangle from the center to the coast. Each clan built villages and farmed for the livelihood of its people. But all had in common the Polynesian culture. Among them, ancestor worship played an important part.

The Moais are in fact only human representations, simple statues. They represented the ancestors, that is to say, the physical persons at the origin of the Polynesians, but also their culture, their history. The worship was practiced on the principle of Polynesian traditions. Each village had its "Ahus", a flat ground laid out for the worship on which the religious ceremonies were held, but also the public meetings. This esplanade served as both a place of worship and a place of social gathering.

The first Moaïs were in real size, they were carved on the basis of Tikis islands (" Ti'i ", Tahiti). A Tiki is a statue symbolizing either a man, a god, or a man-god. The representation was stylized according to a technique peculiar to this region of the world.

But gradually and without reason, the inhabitants of the island began to make statues higher and higher. Nowadays, those who are on the spot measure between 2.5m and 10m, with a statue of 21m abandoned before being finished, she is still in the quarry and has never been set up. They weigh several tons, sometimes several tens of tons.