If the first Egyptian pyramids of the history were pyramids with degrees (IIIe dynasty), these turned into pyramids with faces Smooth (4th Dynasty) thanks to the ingenuity of the architects of the time. But of course, trying to build a smooth-faced pyramid was not easy, it took the will of a pharaoh to achieve it. This Pharaoh is Snefru, the last king of the Third Dynasty.

Learn more about the different kinds of the pyramid period.


In fact, it took only two attempts to Pharaoh Snefrou (-2575 to -2551) to achieve its pyramid with smooth faces: Meidoum's pyramid, also called the "false pyramid", and the rhomboid pyramid. But while he was doing these tests, perhaps a little earlier, he had one of eight small pyramids built in the different provinces of the kingdom. They are called the "provincial pyramids" and they correspond to a particular period in the evolution of the Egyptian pyramids, an era of development techniques of pyramids to degrees.


Once the construction technique was acquired, the successors of Snefrou were built very large pyramids, they are called the giant pyramids. They represent the next period in the history of the pyramids. 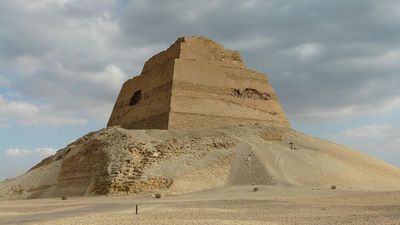 The Step Pyramid of Snefrou, Meidum

The Step Pyramid of Snefrou, Meidum 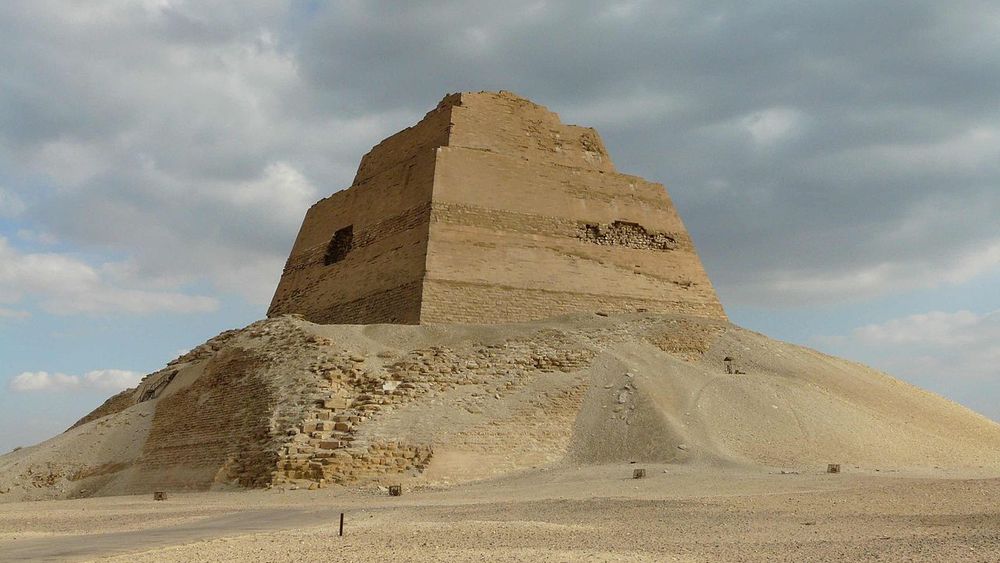 The pyramid of Snefrou, in the city of Meidum, was stepped, but it was transformed into a pyramid with smooth faces.

The Meidum pyramid is a step pyramid built by Pharaoh Snefru, the first pharaoh of the Fourth Dynasty. It is also called the false pyramid, because of its current form. When finished it measured 93.5m high for a base of 147m. But its coating completely collapsed, revealing the 70m high central core. It was part of a large complex, surrounded by a wall 2m high and 1.4m wide and containing, in addition to the pyramid itself, a single chapel that was against the north wall. This few buildings inside the complex is a curiosity because until then, the funerary complexes of the Pharaohs of the Third Dynasty were very rich in chapels, temples, offering rooms, altars and other architectural elements. Some even looked like real small towns. But the Meidum pyramid was much simpler.

This complex also had a satellite pyramid, a temple of the valley, called "low temple", connected to the complex by a pavement rising and open 210m long.

The Meïdoum pyramid was built in three stages:

Nowadays only the central core remains. There are two hypotheses to explain this partial destruction. 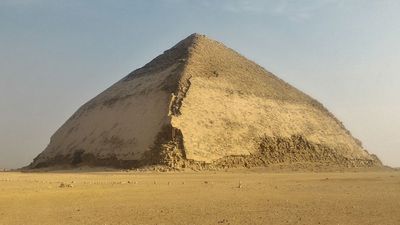 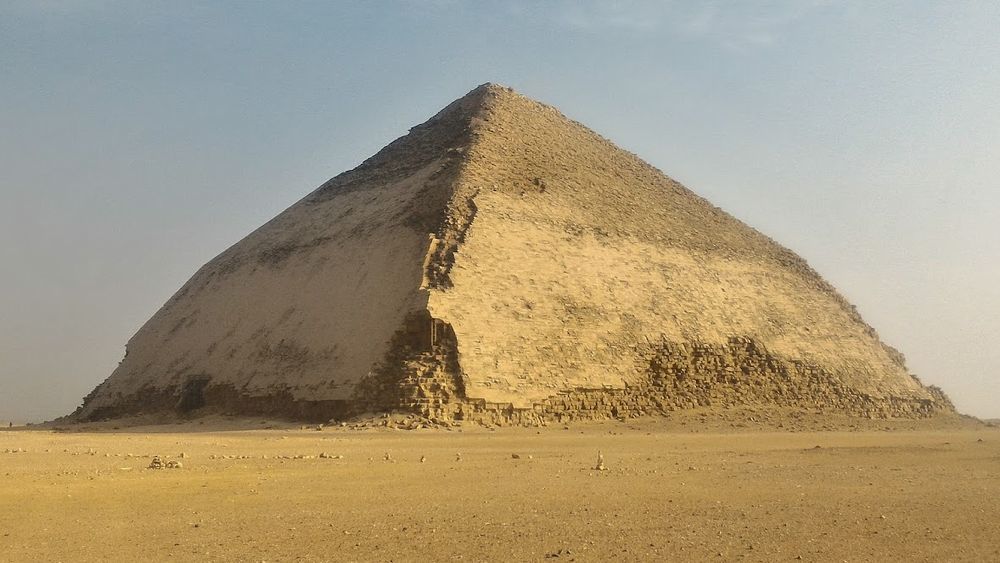 The pyramid of Snefrou is rhomboidal, it is the first and only attempt to pyramid with smooth faces.

The pyramid of Snefrou is the second attempt at pyramid with smooth faces of this pharaoh. It was located in a funerary complex that contained the main features of this type of construction: A space delimited by a high wall, inside a pyramid, a temple called "high", a pavement and a "low" temple. But what makes the originality of this pyramid is in two points:

It is rhomboidal: This pyramid was built in three stages, like the Meidum pyramid. First there was a pyramid of 157m side with a slope of 58 °, making it rise to 125m. Some Egyptologists think that its inclination was rather of 60 °, for a height of 136m, but one does not know which hypothesis is good, to date. Still, during its construction the architects decided to widen the base, carrying the sides to 190m, but with a lower inclination. These additions represent the 2nd stage of construction. The 3rd comes while the pyramid is 49m high. Obviously serious problems have appeared, cracks threaten to collapse the building, subsidence is noted. It is therefore necessary to continue the construction by limiting the inclination to 42 ° to complete the structure as quickly as possible. The fact that the upper part is smaller implies that the forces acting on the lower part are not only smaller, but also on the central part of the pyramid, and not on its periphery, which is more fragile.

It is well preserved: The rhomboid pyramid is the best preserved of all the pyramids of Egypt. It is the only one to have kept almost all of its coating, which is made, as always, blocks of fine limestone perfectly smoothed. You should know that all the pyramids with smooth faces were initially covered with this very white coating that would make them shine in the desert, but as they disappeared, it is hard to imagine what it could be. Except on this pyramid, which is the perfect example.

Moreover, the rhomboidal pyramid has some other peculiarities: It has two entrances (on the west and north face), it uses a harrow closure system (for the first time in history), it does not have sarcophagus and its satellite pyramid was 53m high originally.

The red pyramid is the first successful smooth-faced pyramid. Low inclination, its shape and the apparatus of the blocks that compose it are such that the whole could be built to the end, and rather stable since this pyramid has never collapsed, despite its 4300 years of 'existence. It has certainly lost its coating, but it is just as impressive as it should have been at the time of its construction.

The red pyramid, which owes its name to the color of the blocks that compose it, is in the necropolis of Dahshur, 25Kms south of Cairo, just after that of Saqqara But it's part of the giant pyramids, not failed attempts.

The differents kinds of pyramids

The plateau of Giza