The Giza Plateau is a geological structure dominating the Nile Valley, 25 km south of Cairo. It is on this plateau that were built the three famous pyramids, emblems of ancient Egypt. 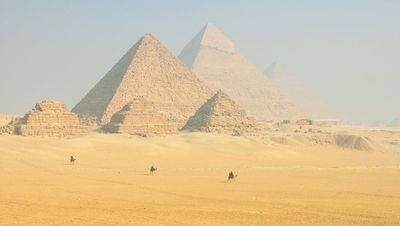 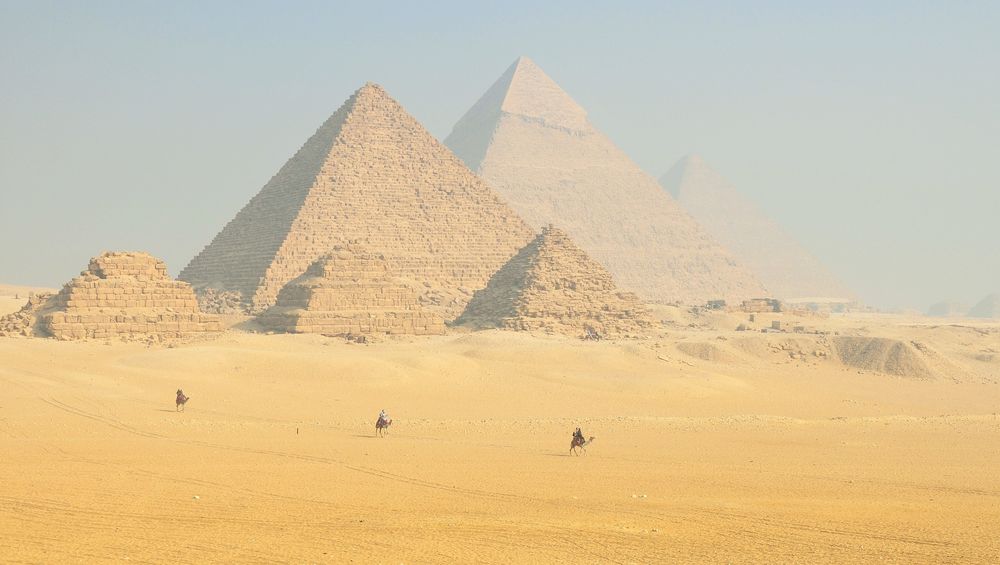 The three pyramids of Giza, on the plateau of the same name


Who do they belong to?

The plateau hosts three separate funerary complexes, each with a main pyramid and ancillary pyramids. The oldest of the three main is also the largest, it is attributed to Pharaoh Khufu. The second in size is at Khafra, son of Khufu and the third at Menkaure, son of Khafra.

It should be noted that between Khufu and Khafra there was another pharaoh, half-brother of Khafra, but who did not have a great role in the history of ancient Egypt. He did not leave a funeral complex in Giza.

An important element to consider is the poor reliability of the attribution of each pyramid to a pharaoh. If today it is obvious that they date from the mid-sixteenth century and were built to serve as tombs, the assignment of each pyramid to his pharaoh is not obvious. Nowadays we think that Khufu, Khafra and Menkaure are indeed the holders but the evidence that prove it is fragile. We are not immune to a discovery that would challenge them. For example, the great pyramid was attributed to Khufu because a cartouche was found in his name in the discharge chamber above the king's chamber. But is this enough to make him the owner of the pyramid?

According to archaeologists, yes, because engraving a name in a monument was not trivial for the time, it was a sacred act in relation to the divine. So the presence of his name can associate the pyramid with this pharaoh, but perhaps we will discover later that this view is wrong. It is therefore very likely that these three assignments are correct, but do not be surprised if it is necessary to revise this point of view.


Comparison between the three pyramids

The three funerary complexes of Giza are similar in the sense that they are all composed of the same elements: A pyramid serving as a tomb surrounded by a wall, a high temple that adjoins the enclosure, a covered pavement that connects the temple high to a low temple and one or more annex pyramids. That of Khufu also contains pits harboring a funerary bark.

The differences are mainly about the size of the pyramids and their finishing, because the temples are comparable, pretty much. The covered roads do not have the same length of course, but there are no essential differences between those of the three pharaohs.

Discover the necropolis of Giza


How do they fit in with time?

The Giza Necropolis was used during the IVth Dynasty, that is towards the middle of the XXVIth century. The previous one had favored Saqqara, further south. However, Giza was used before the 4th Dynasty, and tombs of the 1st, 2nd and 3rd dynasties were attested.

You should know that when Khufu made his pyramid, the first to be built in Giza, he did not have much history: his father had built the first smooth-faced pyramid in Egyptian history, but this was a failure, he had to finish by limiting the inclination, which gave the rhomboidal pyramid. So he made a second pyramid, the "red pyramid", that he could finish normally: It was the first successful attempt. Right after, Khufu built the largest pyramid in Egypt.

Learn more about the evolution of architecture of the pyramids

Although it has long been argued that the object of the pyramids was exclusively to serve as tombs, there are several facts that suggest that this is not necessarily the case, a hypothesis that would call into question many studies but whose question is worth asking. The facts are as follows:

These few arguments obviously do not call into question the numerous studies that tend to prove that the pyramids were tombs, but this statement could be invalidated one day.