﻿ ﻿ Background of the construction of the Djoser pyramid

Background of the construction of the Djoser pyramid

The Step Pyramid is attributed to Pharaoh Djoser, the first pharaoh of the Third Dynasty. It was built a little before the twenty-seventh century BC by Imhotep, great administrator of the king and priest. It was he who had the idea of transforming the traditional royal mastaba into a succession of mastabas of smaller and smaller size, forming a staircase to heaven. 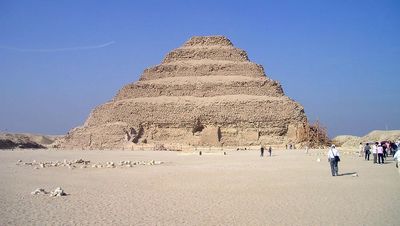 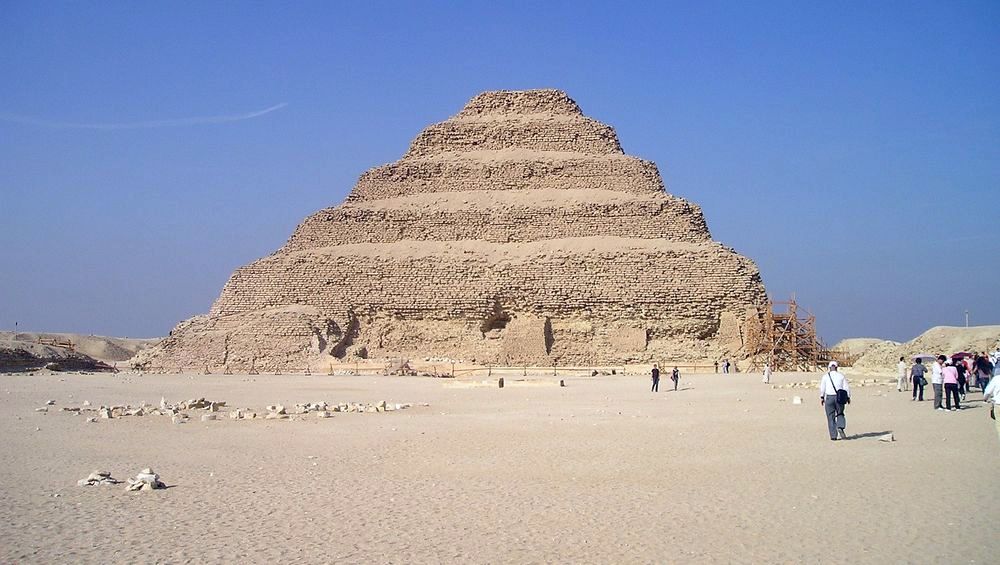 View of the pyramid of Djoser

This royal tomb is actually more than just a pyramid, it was original. It is actually a small part of a large funeral complex, very complete and endowed with numerous buildings girded behind an imposing wall of which a part has been reconstituted these days.

Let's start with a little historical reminder, to put the construction of the pyramid of Djoser in context.

We are about -2600, in lower Egypt. -2600, it is the Third Dynasty, which marks the development of the Egyptian civilization. The latter is divided into several great periods, including the high empire, the middle empire and the lower empire, separated from each other by intermediate periods. The oldest, the high empire, was built on the basis of the unification of the peoples of Upper and Lower Egypt (the delta and the Egyptian part of the Nile for Lower Egypt, Nubia for Upper Egypt, in actual Sudan). The pharaohs of the first two dynasties set up a strongly administered royal organization and strengthened the unity of the territory. From the Third Dynasty there was such stability, such prosperity, that the pharaoh could afford to build funerary monuments of large sizes, very complete. He had an abundant, trained and efficient workforce and the construction techniques had been developed previously, which gave him all the latitude to build what he wanted. Or more, what his chief architect wanted.

The tomb of Djoser, first pharaoh of the Third Dynasty, was the first to take the form of a pyramid. Before, the Pharaohs were buried in mastabas, rectangular tombs whose summit exceeded the earth. They symbolized the primordial hill, a representation of a land appeared from the middle of the ocean and from which the earth was formed. It is a simplified vision of genesis in Egyptian civilization.

Geographically Djoser's pyramid is in the necropolis of Saqqara, which is about twenty kilometers south of Cairo, facing the ancient city of Memphis. It is bordered by the necropolises of Dahshur in the South and Abousir in the North. It should be known that the west bank of the Nile, which is on the side of the setting sun, was reserved for burials while the other side was dedicated to the living, so it was to the east that there were cities and to the west cemeteries.

Several necropolises were already exploited during the first dynasties, but the tombs of the pharaohs were mainly in Abydos it was in Saqqara that there were the greatest number of royal tombs, at the time. The oldest tomb of this necropolis dates from the second pharaoh of the First Dynasty, and most of the pharaohs of the first two dynasties are buried here. Djoser also decided to install his funerary monument there. Subsequently, the pharaohs of the Fourth Dynasty preferred to remain for eternity at the necropolis of Giza, further north, but later the pharaohs of the fifth and sixth dynasties reused Saqqara, which now contains the largest number of tombs royal over a period spanning the entire ancient empire. This succession of abandonment and return of royal necropolises had a symbolic as much as political significance: By changing necropolis, a sovereign marked a rupture with his predecessors whereas while settling near the tomb of the father, the son marks with contrary a continuity in the royal hierarchy. Thus the usurpers of power, as Kephren may have been, have always placed their graves near their predecessors to prove their legitimacy.

Djoser, in ancient Egyptian, means "the Holy Person", but like any pharaoh of the old empire, he had several names. It is a strange name for a man considered alive as a living God. He was called Netjerikhet, meaning "the divine body", during his reign, because Djoser is only the Greek translation of his name.

He ruled from 2691 to -2625, but like all ancient pharaohs, these dates are not certain. His reign is essentially focused on strengthening the administration based on significant economic development, which allowed stability and prosperity for his people. It is necessary to note nevertheless a period of several years during which the famine fell on Egypt, but in general the period was nevertheless rather prosperous. Djoser launched territorial conquests and thus acquired the Sinai Peninsula, currently still in Egypt. This occupation was strategic: By recovering the mineral resources of this mountainous region, the Egyptians were able to develop the industry and thus improve their living conditions.

Until then the constructions were made of dried bricks and wood, two materials that can be easily obtained in Lower Egypt. If nowadays it seems difficult to find wood, we must think that in the twenty-seventh century BC the landscape was different: The Nile Valley was bordered by savannas and no deserts, and if the climate was warm and dry, it was not arid as nowadays, so the wood was a common material at that time. And of course the dried bricks were easily manageable.

But at the time of Djoser we developed a technique of construction which was certainly already known but of which we did not know the techniques to be used correctly: the stone of size. This technique, which required a large number of people and efficient tools allowed the construction of buildings much stronger than before. But to get there, not only did it require a lot of manpower, which could be achieved by the economic stability of the time, but also the infrastructure for the tools, which means knowing how to work the metal to a great extent. quantity, for example.

Development and innovation are the two phenomena that made it possible to build the pyramid of Djoser, the first ever in Egyptian history.

The architect of the Step Pyramid is probably the most famous ancient Egyptian in the world, with the exception of the Pharaohs themselves. This is Imhotep.

Imhotep lived a little before 2600 BC, he was a priest, architect, doctor, and administrator. These four functions were, one imagines, of great importance and to find them associated with the same man gives an idea of its importance. He was close to Pharaoh. As an architect, it was he who directed the work of his burial, he is at the origin of the idea of the original form, while until then, the pharaohs were buried in mastabas. He was also a palace administrator, a position to be compared with a high-level official nowadays.