Khafra is a Pharaoh of the IVth Dynasty, son of Khufu and father of Menkaure. His approximate reign dates are -2518 to -2492. 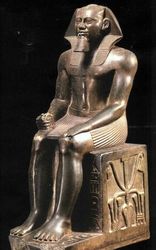 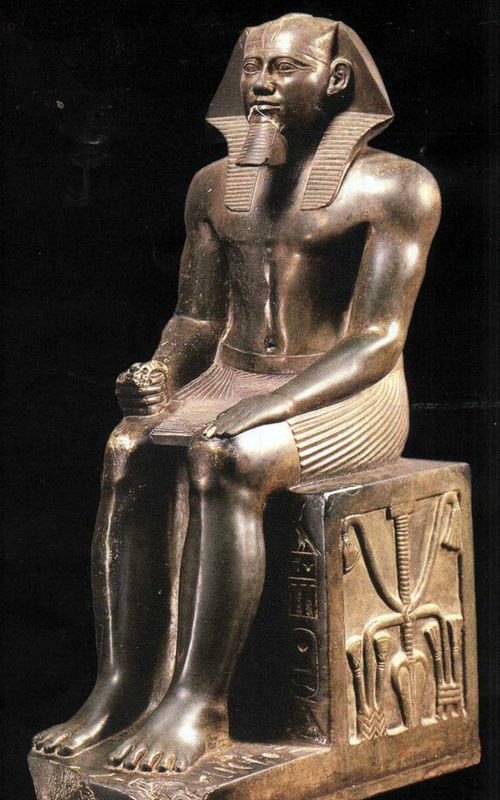 The pharaoh Khafra, son on Khufu

Khafra is the fourth son of Khufu by Queen Henoutsen. He had 7 brothers and half brothers and 4 sisters (or half-sisters). Queen Henoutsen was the third queen of Khufu, and in the first place there was no indication that Khafra would become pharaoh, having an older brother (Kaouab I). However, he died before his father, and it is naturally his brother Djédefrê who took over from Khufu.

At the death of Djedefrê we do not know what happened in the royal family but the fact is that the son of Djédefrê did not go up on the throne, it was his uncle Khéphren who was chosen. What does it conclude? There are several hypotheses explaining this break in the tradition of entrusting power to his son.

For the moment, no archaeological trace supports one of these hypotheses, nor does it propose others, of course.

The reign of Khafra is unclear because it reigned long ago and it is difficult to transform the little archaeological material found into historical facts.

It seems that Khafra reigned 23 years, from -2518 to -2492, years in which scholars agree that they were good for the people. But this reasoning is based on few archaeological elements. We can see that the private tombs built during this period are particularly well made, rich and of quality. One extrapolates then by concluding that the people having their own tombs were rich enough to be able to build them of such good behavior, and that the rest of the population was in agreement. There are other reasons to believe in good years during the reign of Khafra: New expeditions were launched, we find the cartridge of Khafra in various parts of the region while we know they were not under Egyptian occupation previously.

Moreover, the ruling class was infiltrated by the royal family. This state of affairs was not new, under Khufu already the highest positions were occupied by members of the royal family. The name of Akhetetep was found, it corresponds to the person who held the highest position in the administration of Khafra, that of vizier. (A vizier, in Egyptian antiquity, was the second of the Pharaoh, obviously a later name, made by analogy with the Arab civilization which came much later)

As far as religion is concerned, so little has happened to us. What is certain is that the movement of worship of Re, initiated long before the Fourth Dynasty but particularly developed under Khufu had taken so much importance in the society of the time that Khafra tried to develop, with some success, the worship of Atum. Atum was one of the most important gods of the Egyptian pantheon, he was the creator God, the one at the origin of all the other gods.

However, he did not question the cult of Re, whose name he kept, since his royal title retains the title of "son of Re". Khafra also continued the tradition of worshiping the previous pharaohs, all considered sons of gods. There was therefore a temple where worship was worshiped in Khafra, a temple that welcomed a total of 32 priests during the ancient empire (The majority were in office during the 5th Dynasty) The worship of Khafra disappeared with the first intermediate period , and during the middle empire the temple of Khafra was demolished in favor of the pyramid of Amenemhat I, who lived in the twentieth century BC.

If we know his usual name in the form "Khafra", his king was called by the ancient Egyptians "Khafrê", but also Khafra or Khafra or Chafre or Khafra. It is also found under the name Suphis II, or Suphis II. Khafra is its Greek name. 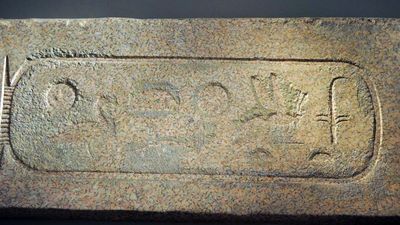 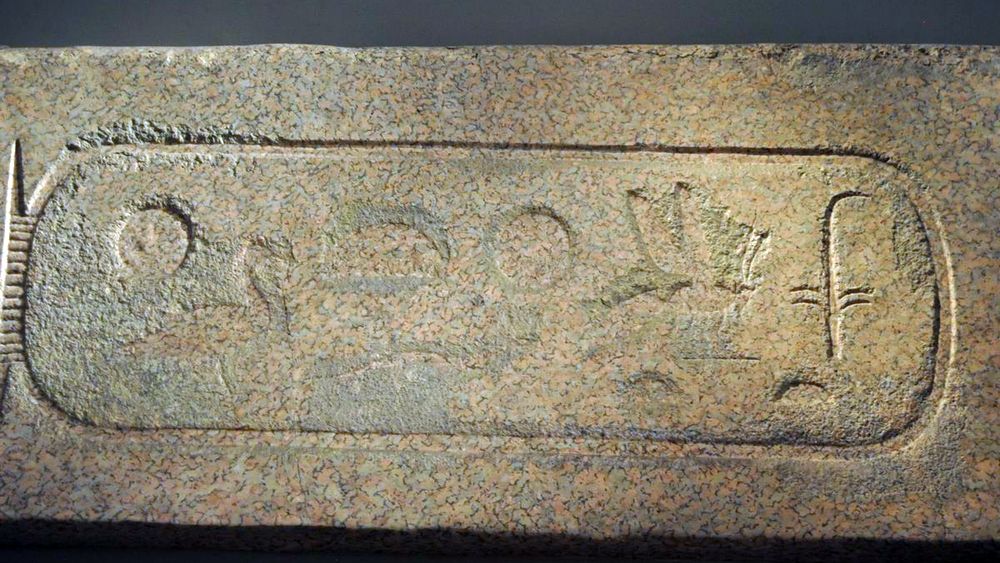 One of the cartouches of Khafra


The constructions of Khafra

The pyramid and its necropolis

If we know Khafra nowadays, it is of course for the second pyramid of the necropolis of Giza, what we call today the famous "pyramids of Egypt". It is actually a complete funeral complex, with a pyramid-shrine encircled by a surrounding wall, a high temple, a covered pavement and a low temple, that is to say a rather classic set for the pharaohs. His pyramid is just 3m smaller than that of his father Khufu.

Learn more about the Khafra Pyramid.

Second monumental work, the Sphinx: This is the common name of the fantastic human-headed lion statue on the Giza plateau just north of the temple. bottom of the necropolis of Khafra. Nowadays it is considered that the sphinx is a construction of Khafra and its temple, just in front of its legs, was installed here voluntarily by the pharaoh. Starting from this principle it seems that the Sphinx is a representation of Khafra himself.

But this hypothesis is defeated by some people who believe that this monument is prior to Khafra. They justify it by the use of the port of the false beard, appeared under Khéphren. But the Sphinx does not wear it, which leads us to believe that the statue is anterior to this king. She would be an image of Khufu for them. But if we still do not know who the Sphinx is, most agree that it is Khafra.

Lear more about the great Sphinx.

Alas, there are few other monuments that can be attributed to Khafra. We have found his cartouche on blocks elsewhere than Giza, but it is not sure that it is not re-use, so the archaeological value of these cartridges is zero to date a monument.


The statue in diorite

If one has a picture of Khafra nowadays, it is partly thanks to a magnificent statue that was found in the temple top of his funerary complex.

It was discovered by the Egyptologist François Auguste Mariette, former professor at Boulogne-sur-Mer College, in 1860. She was in a well dug in a room of the lower temple, near the pyramid. This well is not contemporary with the construction of the temple, it was dug later. The statue was accompanied by a large number of debris from other statues.

This magnificent statue was carved in a diorite block, a very hard stone from a quarry in southern Egypt at the time. She represents pharaoh Khafra, one hand flat on his thigh and the other with his fist closed, seated on a wooden throne decorated with several lion's feet, a protective symbol of ancient Egypt. The sides of the throne are decorated with two plants symbolizing high and low Egypt (the lotus flower and papyrus) and a hieroglyphic symbol meaning "Union".

Khafra wears the traditional headdress, symbol of royalty. When we look back, we see that this headdress is made of the wings of a hawk that rests on the shoulders of the pharaoh. But the hawk was the earthly representation of God Horus, son of Osiris. Placing the falcon on Khafra's head makes him a successor to the God Osiris.

Historical context of the construction of the pyramids