﻿ ﻿ The temple of the Sphinx

The temple of the Sphinx

What is called - improperly - "Temple of the Sphinx" is actually a temple dedicated to the God Re, the famous Sun God of the Egyptians. If we gave it this name because it was built right in front of the legs of the Sphinx, the logic wanted it to be associated with it. And yet, despite this proximity, this is not the case. 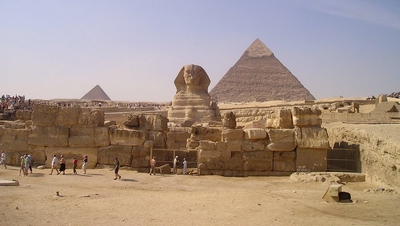 Temple of the Sphinx

Temple of the Sphinx 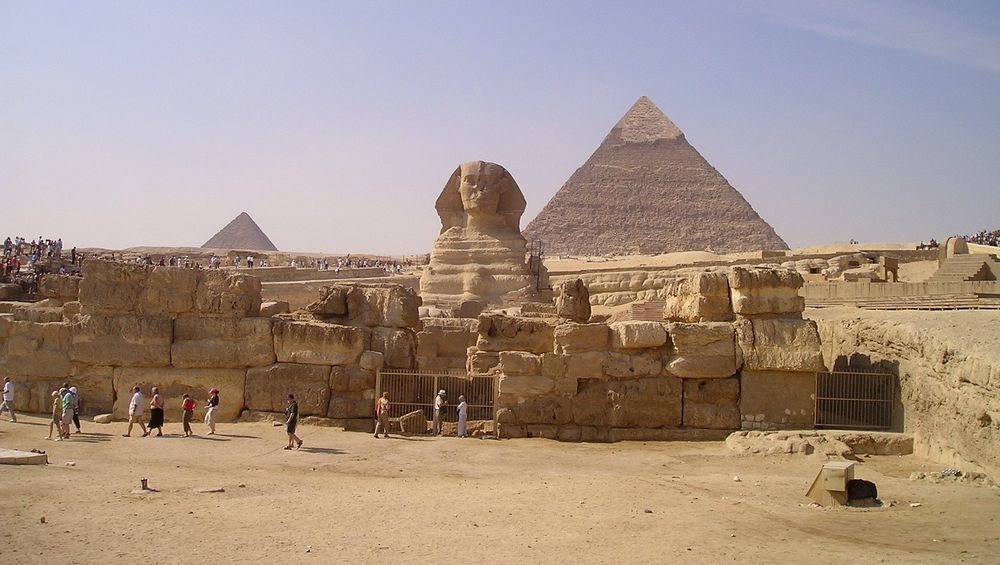 Temple of the Sphinx, at Giza

This temple has a curiosity, it is similar in size and shape to the lower temple of the Khafra funerary complex, and it was built in its alignment, like two twin temples. Their similar bills tend to prove that they were built by the same architect, so at about the same time, but this state of affairs is not sure.

The Sphinx Temple was built with limestone blocks carved in the rock of the Giza Plateau, in local quarries. Its walls were covered with blocks of pink granite from the far-flung quarries of Aswan in southern Egypt, and the interior walls were made of limestone from Tourah, an underground quarry east of Cairo that has the characteristic of providing a white stone with very fine granularity. It has also been used for the coatings of the three great pyramids of Giza. The floors themselves were sometimes covered with alabaster, a stone also very white. Note that some interior walls were covered with alabaster or even granite, not only Tourah limestone.

The temple plan is relatively simple. First of all, we must know that it is symmetrical along the East-West axis. It has two entrances on its North face, equidistant from the angles of the building therefore (due to the symmetry). Each entrance serves the same type of corridors and room. First, the visitor goes through a north-south corridor that opens onto two granite paved rooms, one in the west, the other in the north. The end of the west corridor leads to a corridor lined with columns that adjoins the central part of the temple, the large courtyard. This corridor is 21m long and 5 wide, the columns are granite.

This courtyard is very large, is 46m long by 23 wide and is paved with basalt stone. It has 14 passages, 2 on the North and South sides, and 5 on the East and West sides. Along the walls we can see cavities at regular intervals: It is a notch to hold statues that have now disappeared, alas. The courtyard narrows twice, forming a kind of porch supported by six columns in its wide part, and two in the narrow part. At the bottom there is a square niche, it probably had to accommodate a statue.

On the other side of the courtyard, on the south side, a corridor leads to two perpendicular rooms paved with alabaster.

To understand what served the temple of the Sphinx, it was enough to understand how it was built. He had, in the inner courtyard, two porches that went deeper and deeper into the temple, porches perfectly aligned with the rising and setting sun. In the Egyptian pantheon the Rising Sun is associated with the God Khepri and the Sun setting at the Atum God. Thus highlighting the daily race of the Sun, this temple had no other use than to venerate the Sun God, and this especially as the court was most likely to contain an altar in its center, altar necessarily dedicated to God Re, the Sun at its peak.

Therefore, it is the internal structure of the temple that makes it possible to deduce the function of the temple, and not its geographical location. This function is, moreover, corroborated by the story that tells us that Khafra, pharaoh in exercise during the construction of the temple, had put forward the cult of Re during his reign.