When we look at the pyramids of Egypt, be it the three great pyramids of Giza or the smaller ones of Saqqara or Dahshur, we do not ask too much about the materials that were used for their constructions. And yet, between the pyramid itself and its funeral complex of which it is a part, there have been several types of materials that have been used. 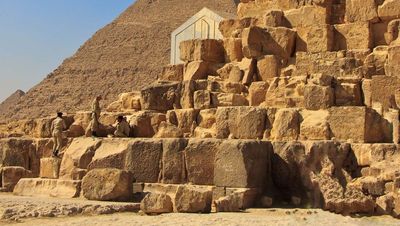 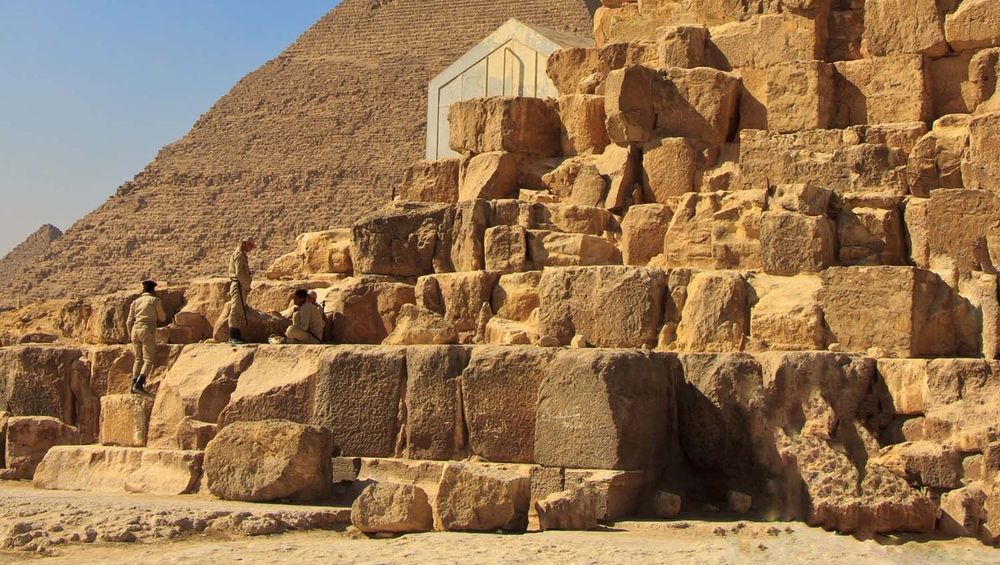 The main materials are limestone, granite and syenite (a depleted granite), sandstone, wood and raw brick. All the stones are extracted from different quarries, the wood comes from forests of the Nile delta or more distant lands in the south of the country.

Of course, all these materials were not used for the same thing. The pyramids themselves are in limestone, the common stone on the spot. Available in almost infinite quantities, it is easy to cut, extract, polish. It is the go-anywhere stone that has been widely used. In Egypt, it is ocher. For comparison, in the South of France, it is light gray and in the North of Europe, it is rather light beige.

The pyramids were covered with other limestone stones. With a very fine grain but especially immaculate white, it was used for finishing. If the Great Pyramid of Khufu lost its cover, that of Khafra partially preserved, at the top. And Snefrou's rhomboidal pyramid possesses it almost completely, which allows us to see what the other pyramids of Egypt looked like.

Finally, the limestone was also used to cover the walls of the inner galleries of the pyramids, but not always: Sometimes these facing plates were made of granite.

Limestone was generally extracted from the soil near the construction site area. The pyramid of Khafra still has some careers of massive blocks. Fine limestone was extracted from an underground quarry at Tourah, a site now included in the Cairo conurbation, east of the city.

Sandstone was rarely used because of its fragility, but traces of it were found on some buildings attached to funeral complexes. It seems that there is none in Giza, this material is rather on the side of Saqqara. Sandstone is simply sand compacted by the pressure of the upper layers.

Syenite is a magmatic rock close to granite but devoid of quartz. It must have been a valuable material because it came from the Aswan quarries in the south of the country and had to be transported by boat over long distances. The syenite was used to build the heavy protective blocks above the king's chamber, in the pyramid of Khufu.

Granite was used to partially cover the pyramids, from that of Khafra. Indeed, the latter was covered on the few rows of the bottom of red granite stones carved with great precision. If they have disappeared nowadays, it is not the case of that of Menkaure, of which a large part of the low siding is still in place.

The wood was used not in the pyramids but in the adjoining buildings of the funerary complex of the pharaohs. There are some traces, like in the funerary chapels of the pyramid of Djoser, in Saqqara.

Obviously, this material has completely disappeared nowadays, eaten away by time.

Here too it is not the most used material, and especially not in the pyramids, but in the funeral complexes. Some of the ancillary buildings were built of raw bricks, which are just blocks of dried clay. This is of course a fragile material that has not allowed buildings built thus to keep up to our days.

On the other hand, the pyramids of the Middle Kingdom, few in number, have a massif made essentially of raw bricks. Smaller than the peak age of this period, raw brick could be used without risking collapse due to too much pressure. These pyramids were covered with limestone well adjusted to protect the heart of the pyramid.

Alabaster is a stone made of gypsum or calcite, it is a white stone that is usually used for carving. It is found in the temple top of the pyramid of Khafra, the ancient Egyptians have used to make the soil of this temple.

The village of workers