The Giza Plateau is one of the most famous historical sites in the world. Geologically, it is only a rocky plateau overlooking the Nile Valley which is nothing different from the other plateaus of the region. If it is so famous, it is home to the Giza Necropolis, a very large funeral complex mainly used during the Fourth Dynasty and whose three Main tombs are the largest pyramids in Egypt. This plateau also hosts a large number of other buildings, such as temples, a village of workers, the Sphinx, etc. 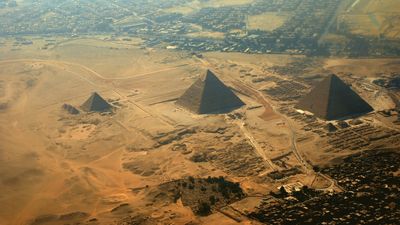 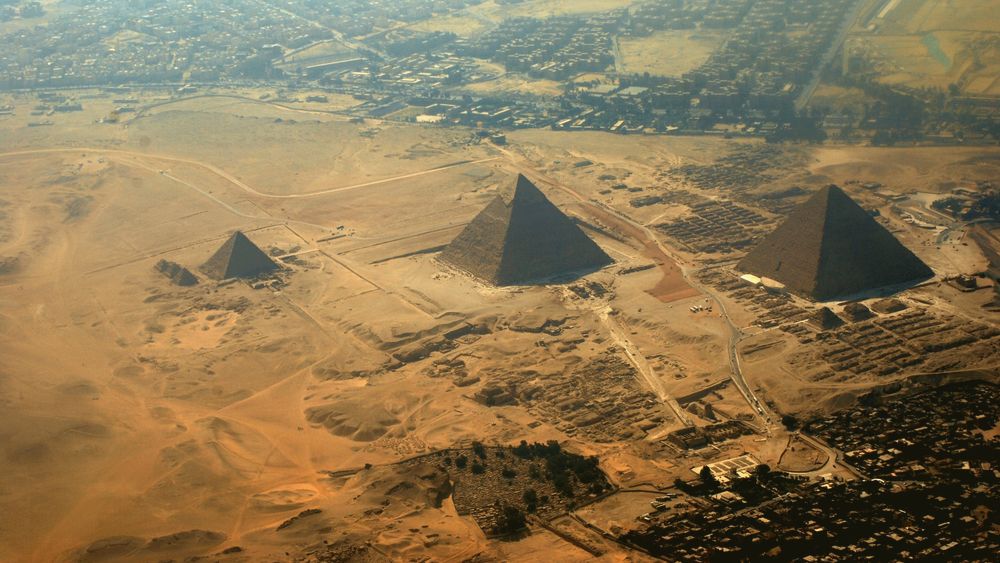 General view of the Giza Plateau

Giza is an Egyptian city located south of Cairo, in the suburbs of the country's capital, on the left bank of the Nile. At 8 km west of the center is a rocky plateau of vaguely rectangular shape, measuring 1.6 x 1.9 km side. It was he who served necropolis to the pharaohs of the Fourth Dynasty.

Geologically, it's a limestone plateau. It is relatively uniform as evidenced by the constancy of its rock and the presence of many natural cavities dug by erosion due to the winds. It is leveled, but this leveling was done by the ancient Egyptians. Moreover a mound has been preserved to serve as a basis for the Khafra pyramid, thus avoiding the size of many blocks. If the plateau is arid - no vegetation grows there today - it was at the time a vegetated area as was the whole region. Indeed, there is a little less than 4500 years ago this region was not desert but presented a landscape of savannah, which seems surprising to us today. In addition, to continue on the local geology, it is necessary to know that the Nile had an arm that snaked more to the West of his bed, this arm passed at the feet of the plate of Giza, bringing the necessary slime to the cultures to the plains under the tray. But time has passed and this arm has moved, nowadays it no longer exists.

The plateau overlooks the city of almost 40m high, at the South-East limit. It is not quite flat since it goes down slightly towards the North-West with a slope of a little more than 5 degrees. The southern part of the plateau is delimited by two faults forming a peak.

The site of Giza is accessed by the Pyramid Highway (El-Ahram sharia) which passes through Nazlet el-Samman, in the suburbs of Giza. Note that the plateau is bordered to the east by the galloping urbanization of modern Cairo whose last buildings stop at the foot of the plateau but which extend more and more to the "gardens of the pyramids", a new neighborhood located on the west side of the plateau and is likely to expand further. 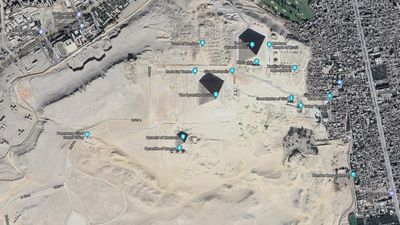 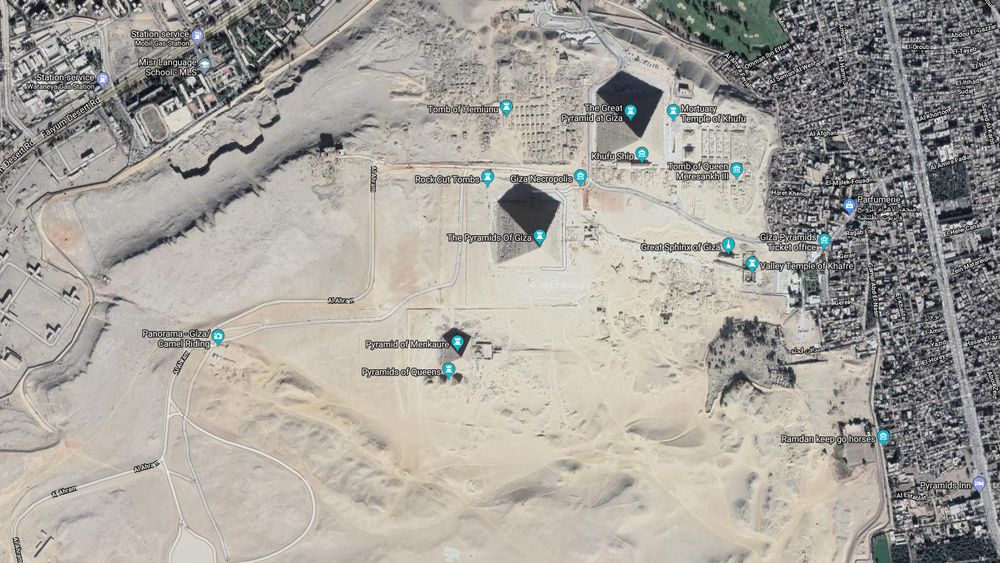 Shape of the Giza plateau, in aerial view 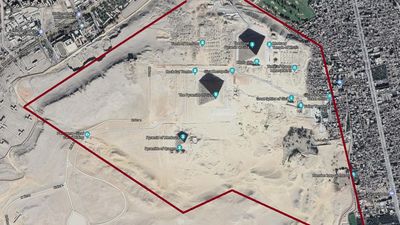 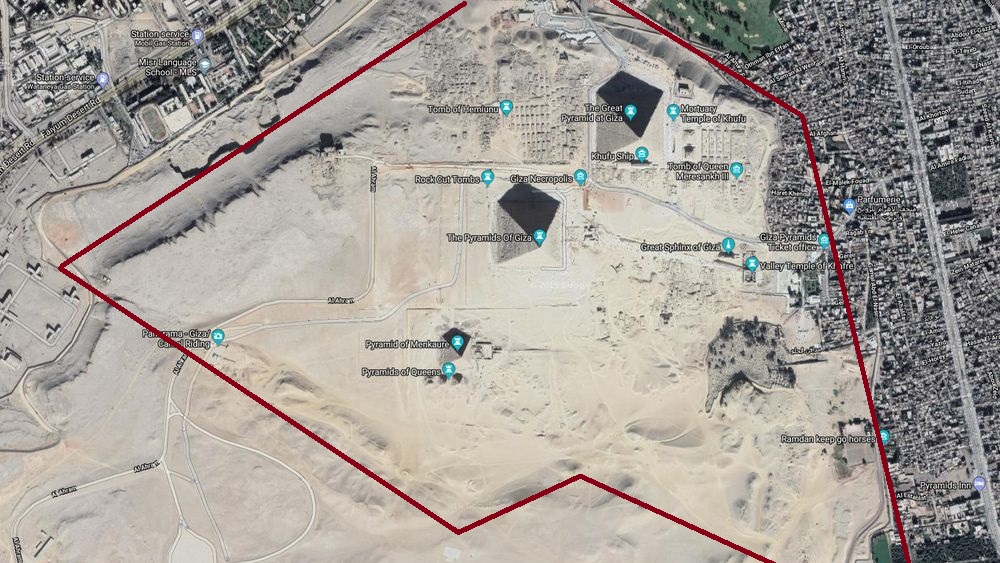 Shape of the Giza plateau, in aerial view, with marking for highlighting these forms

Learn more about the location of the pyramids of Giza.


Evidence of occupation of the plateau before the 4th dynasty

It is quite interesting to know that the Giza plateau was used well before the 4th dynasty. In fact, there is a lot of evidence that clearly demonstrates this fact. The first monument of Giza is the "Mastaba V", which dates from the reign of the First Dynasty, it is the tomb of Pharaoh Djet. There is also that of Pharaoh Ninetjer, the 2nd Dynasty.

Other evidence includes the discovery in the late nineteenth century of four ceramic pots at the feet of the Great Pyramid. But as at the time the archaeological extraction techniques were not as accurate as at present, the exact location was not noted. Moreover when these pots were found the pre-dynastic period was little understood and, since it was admitted that it was the Fourth Dynasty that had alone occupied this site, these pots were naturally considered as of that time. Mortensen, however, has re-examined them and considers them typical of the late pre-dynastic Ma'adi period. Moreover, since they were found intact, Mortensen also argued that they came from a burial place rather than a settlement site. These jars, along with other isolated finds at Giza, have been interpreted as evidence of a colony from the Ma'adi period in Giza, which was destroyed during the construction of the pyramids of the Fourth Dynasty.

In the context of the development of the Fourth Dynasty the destruction of early pre-dynastic and dynastic artefacts in the Giza Necropolis is an important consideration to take into account. In the mid-1970s, Karl Kromer investigated such a debris area, about one kilometer south of the Great Pyramid. In the embankment he brought back finds from the late pre-dynastic dynasties (1st, 2nd and 3rd dynasties)

All this proves that the Giza plateau was occupied before the IV dynasty.


Arrangements made by the Fourth Dynasty

Here we talk about the arrangements made during the time of the pharaohs of the Fourth Dynasty, not those made in modern times. Indeed, since the plateau of Giza is only a vast desert and stony area, how could the ancient Egyptians to launch the constructions that are still there today?

They simply laid out the area so that they could work safely and easily. The main development was the paving of the plateau. It is often ignored nowadays but it is a reality, the Giza plateau was largely paved before making the pyramids and temples therein. Of course the whole plateau was not paved, but the part around the pyramids was. 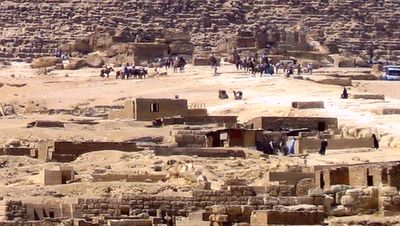 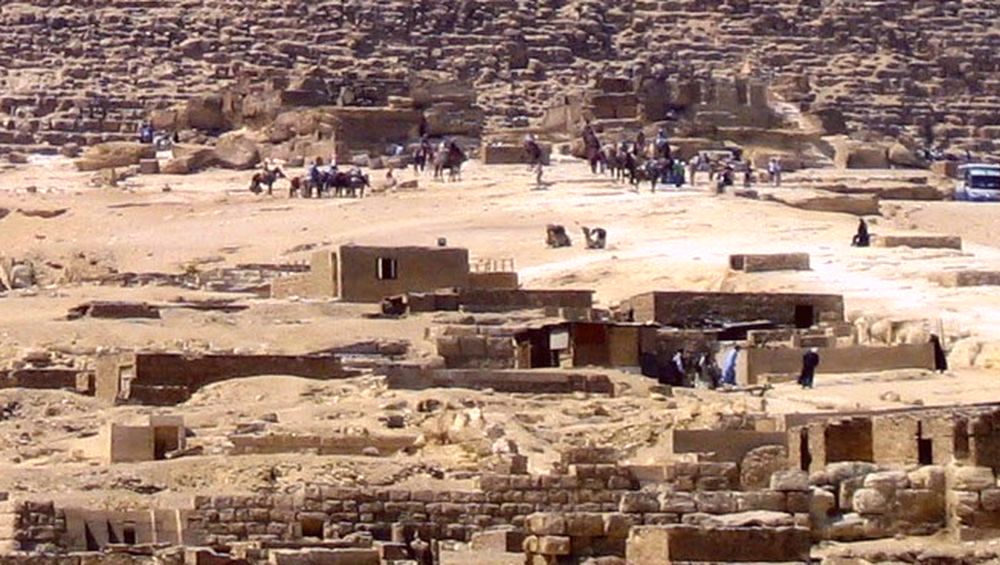 General view of the Giza Plateau

If the Giza plateau is so well known, it is home to a world-famous necropolis, the Giza Pyramids Complex. It is known by the presence of the three largest pyramids that ancient Egypt has left us, but it is above all a funerary complex of very large size, used for a relatively short time in view of the history of the region, and especially perfectly defined. There are still many remains of the necropolis.

The necropolis revolves around several elements:

Note that the three funeral complexes are composed of a pyramid, a perimeter wall, a high temple, an access road, and a low temple, plus additional pyramids, pits containing the funerary bark , cemeteries, etc. And all that, for each of the three pharaoh complexes.

Learn more about the necropolis of Giza.