﻿ ﻿ The solar boats of Khufu

The solar boats of Khufu

A solar boat is one of the many funerary elements accompanying the pharaoh in the life he is supposed to have after his death, according to Egyptian spirituality. 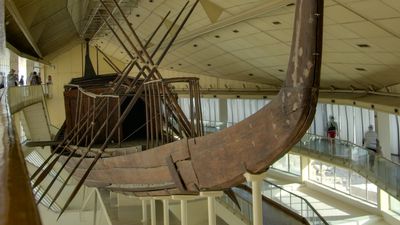 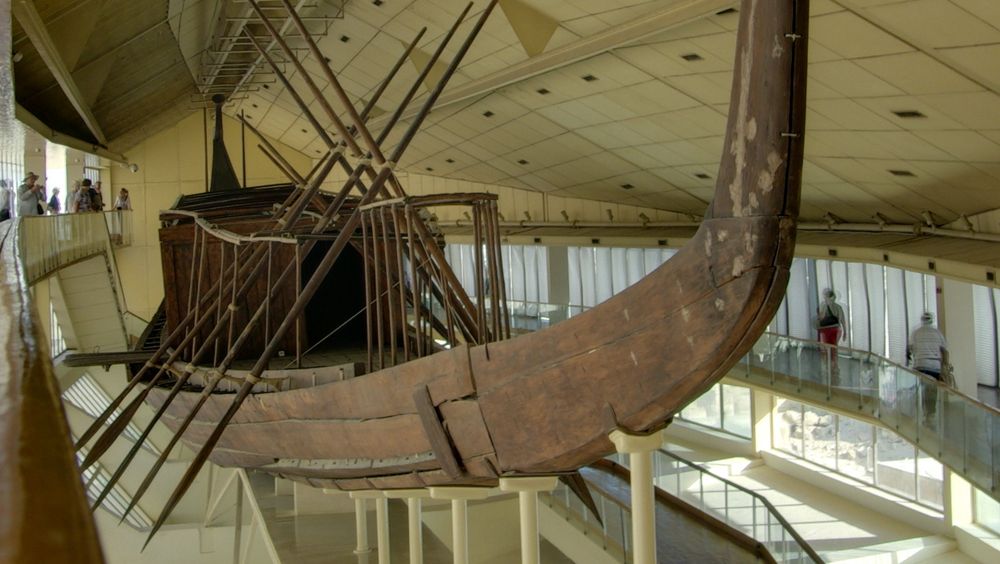 The solar boat of Pharaoh Khufu

The most famous boat is that of Khufu, who lived during the IVth Dynasty, in the XXVII century BC. It was this Pharaoh who built a funeral complex dominated by the largest pyramids in Egypt.


Purpose of the boat

In the imaginary of ancient Egypt, during the old empire, all that lived came from a primordial ocean. At death, what we would call "his soul" returns to this primordial ocean. However, during the old empire, it was thought that only the pharaoh had the ability to join him, he was then to guide the other dead. His guiding status came from the fact that Pharaoh was considered to be of divine essence.

With such a vision of things, it was necessary to help the soul of the deceased pharaoh as much as possible to find the primordial ocean. For this, it was buried with a boat that was to use in its future world to go up the Nile to this ocean.

It was found in spare parts in one of the five pits that surround the pyramid of Khufu. These pits were an integral part of this pharaoh's funeral complex, with the pyramid, the enclosure, the high and low temples, the roadway that connects them and the annex pyramids.

This boat is composed of 1224 different pieces, some of which are marked with mounting indication. She had a flight of 10 oars and therefore required five people to propel her, plus a helmsman in the back who used a pair of oars to direct her. In the center was a 9m long cabin, completely closed apart from two doors opening, one forward, the other rearward. At the tip of the ship was an awning that allowed shelter from the sun.

The decoration is not left out, with interesting decorations on the stern and the bow. She shows several beautiful papyrus leaves.

The Khufu solar boat was made from cedar and acacia wood, two common woods in the region at the time. Today these trees are much rarer, but we must think that there are 45 centuries that separate us from this time, nature has changed in the meantime.

When the boat was discovered in 1947, the question of its reconstruction was raised. On the one hand, was it necessary to put it back together, and if so, how to do it?

The first question was quickly answered, it was decided to go back to be able to present it to the public. It is the Egyptian Ahmed Youssef Moustafa, restaurateur of the Egyptian museum of Cairo, who was in charge of reconstructing the puzzle. This task took 10 years.


The museum of the solar boat

This boat is now visible, whole, in the museum dedicated to it. It is a large room located just above the pit where it was built, and it is the only modern building that exists in the immediate vicinity of the pyramid. Its clean design and its color, identical to the pyramid, make it a building that fits well into the landscape. 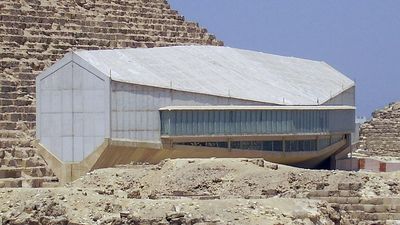 The museum of the solar boat

The museum of the solar boat 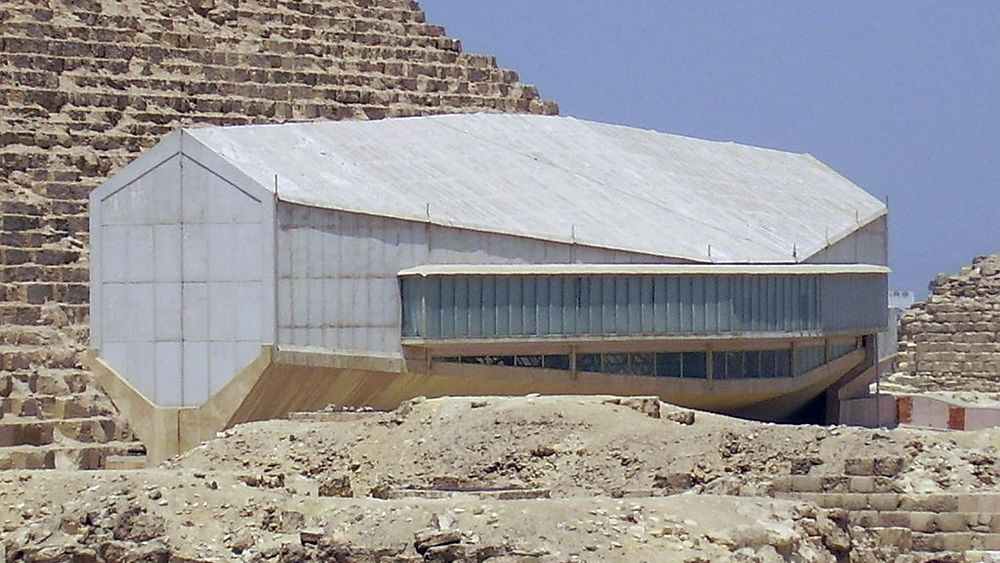 Museum of the solar boat of Pharaoh Khufu

In 1987 a team of Japanese scientists managed to prove that another of the five pits of the Khufu complex also contained a boat.

The choice that was made by the competent authorities was not to touch it because this pit was hermetic, it was not necessary to open it for fear of rapidly degrading its interior. It must be said that this pit was sealed for 4500 years, it was not urgent to open it. But when the Japanese team proved that the seal had been lost the Egyptian authorities had no choice but to agree to the extraction of the boat. It took for that remove the forty heavy stones that blocked the ceiling, without damaging the contents of the pit.

The extraction of the 1200 pieces found in the pit began in 2013. When the assembly work is finished, this second boat will be exhibited in the future great museum of Giza, a museum that will probably be similar to the Imhotep museum, at Saqqara.


The boats of Abydos

The necropolis of Abydos is to the south of that of Giza, it hosts tombs of the previous dynasties of those of Giza. The necropolis was facing the city of Abydos, on the east bank.

Between 1991 and 2000 archaeologists discovered a series of 14 boats in the necropolis. They were perfectly aligned, as if they were still in a harbor. Of course, only pieces were left, but enough to identify them formally. They were all the same size, twenty meters long and 3m wide, for an estimated crew of 30 people. They are cedar wood, a classic wood for this type of construction, it was most likely from Lebanon. They date back to 3000 BC, approximately.

The most curious thing is that these boats are real boats, they are not objects of worship that have never sailed. They are planks assembled by rope and as curious as it seems, the sealing of the boat is ensured by the fact that the wood swells as the rope narrows, firmly plating the boards to each other. A simple system, probably unreliable but enough to ensure the navigation of these boats. So what was the role of these boats? For the moment, modern archeology has not provided an answer, it is not known whether it is purely symbolic solar boats or whether they were ships used to transport equipment or men on the various shipyards. Abydos. The fact that they have been working proves that it is rather the second best solution, but their perfect alignment on the ground tends to prove that they are not mere ships.