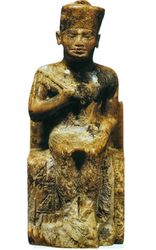 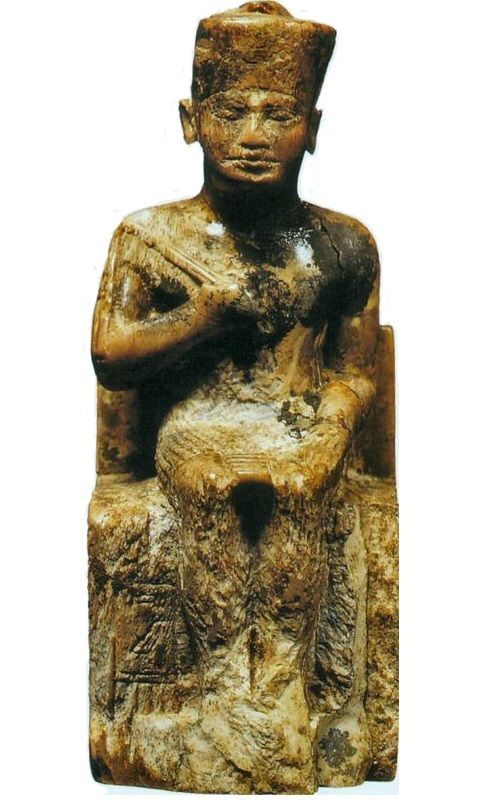 The pharaoh Khufu who reigned during the IVth Dynasty

Khufu is the name of the second pharaoh of the IVth Dynasty in ancient Egypt. It is mainly known for being the one for which the largest pyramid of Egypt was built, on the Giza Plateau. We do not know many elements of his life, his biography is largely incomplete.

The great number of years separating us from the birth of Khufu should make us humble in the face of the accuracy of genealogical information. However certain facts are established, archaeologically speaking. We know that Khufu was the son of Snefru, the founding pharaoh of the Fourth Dynasty. Married to his half sister Hetephérés I, he had a first son, Khufu, then two other sons of a second wife, thereafter. When Snefrou I disappeared it was naturally Khufu who took the throne of Egypt. It was around in -2550 (to two years, the dates diverge).

Khufu had 12 children from four different wives, including Kaub I, who was supposed to be his successor but died before he could take over, Djédefrê who will succeed his father, Khafra who will follow Djedefrê and Hétep-Hérés II, who will become the wife of Djédefrê. It should be noted, therefore, that the brother-sister relationship was not a hindrance to the husband-wife relationship. In practice, Khufu got married with Meritites I and had Kaub I, Baoufrê, Djédefhor and Mérésânkh II. With his second wife Hénoutsen he had Khoufoukhâf, Khéphren, Khâmerernebty I and Minkhâf. With his third wife Noubet he had Khentetenka, Djédefrê and Hétep-Hérès II and finally with his fourth wife he had Néfermaât, Néfertkaou, Ka-Néfer and Âkhkhâf.

The least that can be said about Khufu is that he built three major architectural elements. The best known is its funeral complex that we know through the famous pyramid of Khufu. The grandeur of this complex, which has no equal in all of ancient Egypt, shows the importance of the king (Pharaoh) in the Egyptian civilization of the middle of the third millennium. The amount of workers needed for its construction as well as the tenacity it was necessary to show shows an organization of the Egyptian people without fault. No doubt, then, that this people was organized into an independent, powerful state, equipped with all the trades necessary for public life. So there is a kind of apogee during the reign of Khufu.

The other constructions of Khufu are two temples, one dedicated to Hator (It is to Denderah, a city to 65Kms to the North of Luxour) and the other is the temple of Bastet (that one is to Babastis, an extinct ancient city that was near Zagazig)

The reign of Khufu ended at his death, around 2527 (At two years, the dates are not well enough known). It was his younger son Djédefrê who took over, his eldest son Kaoub I having died in the meantime. His reign will be brief and unrecognized, quite the opposite of that of Khufu and the successor of Djedefrê, Khafra.

We can only rely on bits of information to know the state of the economy at the time of Egypt in the twenty-first century BC. What we see is a convergence of facts that tend to prove that it was during the reign of Khufu that the Old Empire reached its peak. For example, we know that Khufu developed copper and turquoise mines (Sinai, Nubia) and diorite mines (Abu Simbel). State control was stronger on the high officials, with the appointment of members of the royal family in the highest positions of the state. Finally, we know today that the Khufu funerary complex was built by free laborers, paid for the work done. The length of the building site and the colossal sums that had to be committed to it are proof of the people's confidence in the Egyptian state of the old empire.

There are traces of economic activities of this period by hieroglyphs engraved in different places around the Mediterranean. These traces were found in Nubia (northern Sudan), Tanis, Coptos (capital of the 5th nome of Egypt from which the expeditions started), Palestine and Byblos.

No great revolutions in religious practice under Khufu, but rather a confirmation of the increase in practices towards the god Re, a practice known since the first dynasty but little used. Already under Snefru the god Re was more honored than during the previous pharaohs, but under Khufu, the cult took even more flight.

Archeology has not found a lot of representations of Khufu, which remains unknown. However we have:

These two objects are quite dissimilar but there is still enough common ground to consider that this is the same person. The ivory head shows a rather round face with thick lips and a flat nose. The statuette is quite small but we recognize the round shape of the face, which is not precise enough to show these details. Among the differences, the shape of the hair is the most striking, but this is probably due to the fact that the two objects may not have been made at the same time.

There are of course other objects related to Khufu: For example in Saqqara archaeologists have found a small terracotta statue of a lion and another of a goddess with a lion's head named Horus of the sovereign. 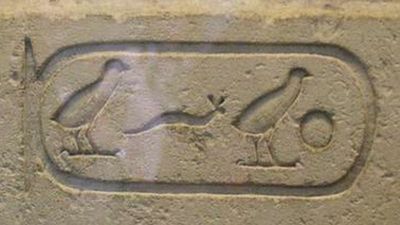 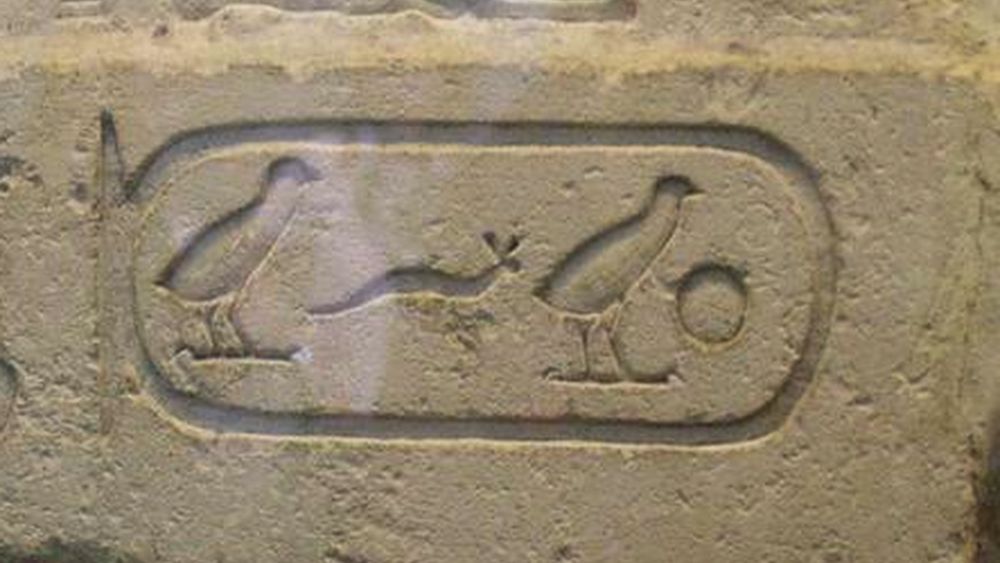 "Khufu" or "Khufu" is a Greek appellation, it is used in France. Anglophones use rather its Egyptian name, "Khufu". It is also called Suphis I or Suphis. Khufu, Khufu or Khufu are his birth names. This is the phonetic translation of the cartridge of this pharaoh which is represented above and which shows, in order:

It is also found with a single quail, or under its name Horus, "Horus Medjedou". Khufu inaugurated a new usage, that of using a "golden Horus name". The interest was to be placed under the protection of the God Horus while enjoying the eternal life that he could grant him, that adding to his name the Golden Horus, represented by a hawk and the symbol of the gold.

This is actually an abbreviated form of "Khnum-Khufu", which means "Khnum protects me". The god Khnum was the divine potter who made the works requested by Thoth. Thoth (or Djehuti) was the god of wisdom, the ruling intelligence of the universe, and was later known as Hermes, Mercury, and Enoch. Thoth-Hermes was the inventor of the arts and sciences, the protector of secret wisdom and an initiator. The name has been adopted by many initiates known as "serpents of wisdom" (the caduceus or "stick of Hermes" is intertwined with one or two snakes). Khnum was later known as Kneph or Chnuphis, who was represented as an enormous serpent, he represented the divine creative wisdom and was the patron of the initiates.

The photo of the cartouche above was taken from the British Museum, on a carved limestone block that served as a false door on the tomb of Sheshi, royal scribe, inspector of Khufu' funeral home.

Of course, over the 3500 years during which ancient Egypt ruled these arid lands, one can imagine that many pharaohs were more appreciated than others.

The Pharaohs being considered as living Gods, to their dead they were naturally the object of an intensive religious cult. During Pharaoh's life there were several priests who ensured the spiritual life of the ruler. At his death the number of priests devolving to this pharaoh could vary. Khufu had 10, and during the 5th Dynasty this number increased until it reached more than 60 during the 6th Dynasty. This is a very high number for a pharaoh who reigned so long before, but whose impressive pyramid at Giza was probably a help in maintaining his memory. The cult of Khufu therefore known an increase of the faithful during the old empire, before the first intermediate period put an end to it. The middle empire forgets Khufu, and it will be necessary to wait for the new empire so that one finds the worship of Khufu within the ancient Egyptian society. At this moment, we find traces of the God Khufu with that of Isis, as if the two were linked.

Historique context of the construction of the pyramids