﻿ ﻿ Painting of the Eiffel tower

Painting of the Eiffel tower

Like any metallic structure of importance the Eiffel Tower needs a layer of protective paint to ensure the good state of conservation of the whole. Since its construction it has been protected, but it must be known that this work is to be repeated regularly, and that it still takes a while.

Nowadays they take place every 5 years (formerly it was every 7 years), and they last approximately 15 to 18 months. The tower uses painters specialized in dangerous environments, because more than the skills of painter, it is necessary to have mountaineering skills to tackle such a task. It is not uncommon to see, when you go up the stairs, the workers at work, with their harnesses and safety ropes. Moreover, between two campaigns, the company managing the tower leaves ribbed models showing how painters work. During a painting campaign the painters are not so numerous as that, generally a little more than twenty. The difficulty of the job is to limit the risk of accidents, but the difficulty lies in working in suspension. It becomes difficult to force to blow up a pile of dry paint for example. It should also be known that painters have an alienating role: They identify the potential risks due, for example, to the corrosion or the weaknesses of a riveting in places where it is difficult to go.

The paint job is still pretty painful. It is necessary to identify the possible points of weakness of the tower, to strip the paint, to clean the parts to be treated and to apply the painting, and that beams after beam, rivet after rivet.

During a painting campaign we do not laugh with security. It is necessary to take into account the safety of the workers but also that of the visitors, because the tower never closes, even during the works. For the safety of the workers, you should know that a painting campaign always starts with the installation of life lines, cables at the height of man, arranged on all the structures, whose role is to allow to anchor the harnesses painters at all times. The painters have safety ropes hung on fixed points, and they always wear a working blue and a helmet.

Visitor safety is assured by various measures. There is for example the establishment of large nets protection, sometimes seen under the first floor of the tower. But there is especially the fact that the tools of painters are systematically attached and can not fall. Either they are attached to the work belt or the wrists of painters, but we never find "free" tools.


Color of the Eiffel Tower

First of all a curiosity: Do you know that the color of the Eiffel Tower is not uniform? It has 3 distinct colors, in the same colors. The darker is applied near the ground, the lighter one covers the higher parts. This is done to limit the visual impact of the tower in the Parisian sky.

Nowadays the color is bronze, but it is not definitive. Indeed, between two painting campaigns, visitors have the opportunity to give their opinion on the color to be taken for the next campaign. Of course, they have no choice between green and blue, but between different shades of brown-brown-bronze. There is a suggestion box on the first floor of the tower that receives these choices. Be aware that initially the tower was brown-red. Later, she took a yellow-ocher tone before finding her final color in the browns.


The figures of a painting campaign

The protection of the metal parts of the Eiffel Tower was implemented from the construction, and double layer. ﻿ 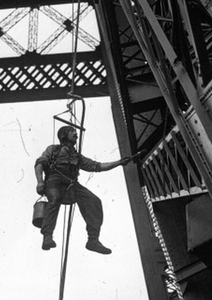 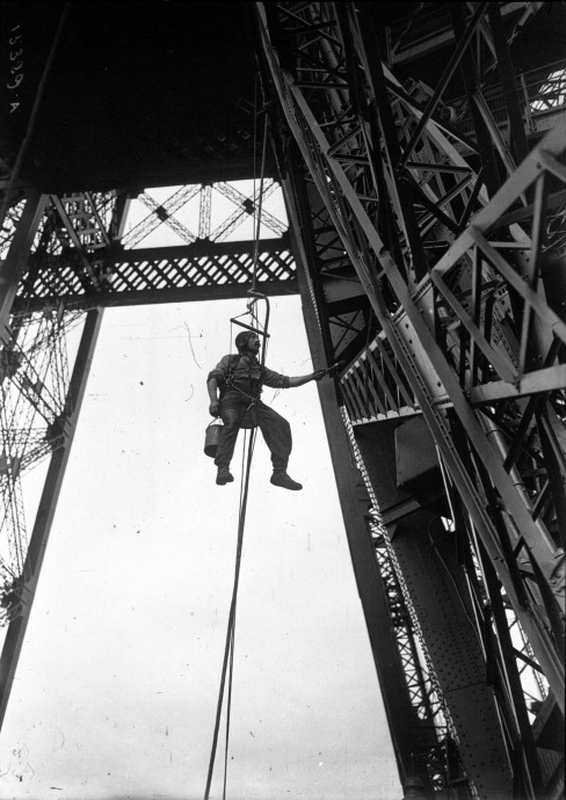 The first was in the workshop, even before the beams were on the site, and the second on the site, as soon as they were in place, they were immediately covered with a first layer of iron minium. The painting contractor was Mr. Nourisson, and it was he who passed a second layer when the tower was completed in March 1889. It was in linseed oil. Two months later he applied to new glazed layer, it is she who gave the tower its red-brown color. It was during this application that the gradient paint system was adopted: The tower was more red at the top and browner at its base, but this technique was immediately abandoned. It will only be used again in 1968, and still is. Mr. Nourisson guaranteed his painting a year, and it cost a whopping 60,000 gold francs.

In 1892, it was necessary to make a first maintenance of painting. Mr. Rivière was called upon to wash the previous paint and apply a layer of the yellow ocher pigmented oil. This is where we saw the tower in ocher-yellow. The cost was 57,000 gold francs, including the maintenance guarantee for five years.

It was shortly after the 2nd World's Fair in Paris, that of 1900, that Gustave Eiffel wrote his book "The 300m Tower" which recapitulated all his knowledge of the tower that bears his name today. This book is very valuable, it allows to have the point of view of the manufacturer at any level. Regarding painting, here is what he wrote at the time:


The principle that painting is the essential element of the preservation of a metal work can not be too much infused and that the care provided is the only guarantee of its duration. This consideration had a special importance for the Tower, because of the small volume of each of its elements, their small thickness and the exceptional weather conditions to which they were exposed. It was first of all concerned in the mode of construction, making each of the parts easily accessible, so that visits can be made at all times to recognize and correct the beginning of rust. The crossbowmen, in particular, which are the most important parts, and which were forced to form by closed caissons, are so large that men can penetrate them; for this purpose they are provided with internal ladders and manholes placed on each floor at a low height above the spacers. As soon as, in the upper part of the construction, it was possible to remove the closed boxes, they were replaced by sections in the form of angles or simple T, such that all the walls were visible. It was the same for all the secondary parts formed by truss boxes with maintenance of which are easy.

As the most important thing is to oppose a rust, all the irons during fabrication at the workshop were kept under covered sheds, and if necessary carefully scoured; they remained exposed to the rain only after their assembly, and after having been coated on all their external surfaces, even those which were to be covered by assemblages, by a good layer of iron minium. The most meticulous care was taken in laying this first layer, which is the most essential.

As the assembly progressed, the heads of the rivets in place were painted and the points where, as a result of the lifting maneuvers, the first layer was degraded, were repaired. Then two general layers were superimposed on the first.

The composition of the painting was as follows:

NOTE: The initial color is already given as "Bright Red Venice".

Flaxseed oil came from the North, drawn clear, free from any mineral oil, acid, resin or any other material. The minium was to be free of all foreign matter. It was ensured by chemical tests that all the materials were absolutely pure.

The two layers were laid by Mr. Nourrisson at the price of 2.99 fr per ton of metal per layer. - The laying of these two layers returned to the sum of 57,328.30 francs.

The fourth and last layer was also laid by Mr. Nourrisson with materials supplied by the Société des Gommes nouvelles and Vernis. - It gave a very thick glazed paint, a very satisfactory external appearance and a high protection efficiency. - It has been applied from March 15th to May 1st, 1899, on all interior and exterior surfaces of irons and irons; except for the decorative frieze, the wooden arcades of the first gallery, the restaurants, the kiosks and the cages of the elevators, which have been the subject of special contracts with Mr. Rivierre.

The tones were of a red-brown shade following samples; the shade was variable from base to top in shaded tones, taking the darkest tones for the lower part. The agreed price for this layer, with a one-year guarantee, was 50,000 francs, which corresponded to an average price of 8.00 francs per ton of metal. In addition, for 1,290 additional tons, a sum of 10,592 francs was paid; it therefore cost a total of 60,592 francs.

This layer gave satisfaction, and it was not until 1892 that it was deemed useful to repair.

La Société de la Tour awarded a contract with Mr. Rivierre for the stripping of parts that could be oxidized, the laying of a layer of lead on them, the leaching and general cleaning of all the other parts , and finally the laying of a general layer of paint. It was to be made of pure ceruse, top quality cured linseed oil and ocher (Parquin brand).

The total package price was 57,000 francs, including warranty and maintenance for five years. - It did not apply to the parts already indicated above (restaurants, arcades, etc.), nor to the beams under the 1st and 2nd floors, to the inner faces of the arches and to the interior of the sections of the ground at 2nd floor, which did not need any repairs.

The market followed its regular course and it was only in 1899, in view of the new Exhibition, that the Tower had to be repainted again to give it a more pleasant appearance. They addressed MM. Georges Hartog and Co., manufacturers of enamels and enamels, who undertook to lay two new layers of their special paint with five shaded shades starting from the dark orange yellow to light yellow at the top, for the sum of 80,000 fr , including warranty and maintenance for seven years. The method of payment is as follows: 40,000 francs on March 1st, 1900, 20,000 francs on November 1st, 1903, 20,000 francs at the end of the guarantee, ie May 1st, 1907.

Decorative paints are as before outside the package.