﻿ ﻿ Stairs of the Eiffel Tower

Stairs of the Eiffel tower

It was in 1884, at the time of the first studies of the monument that the problem of traffic on the Eiffel Tower arose. The desire of the design, Maurice Koechlin, was to have elevators, but you still had stairs, if only help. It was built with 4 staircases, one per pillar, ranging from Ground floor to 2nd floor, plus a fifth leading from the 2nd to the top.


Go up on the Eiffel Tower on foot

This is the normal use of stairs nowadays, with service needs. The entrance is at the south pier where there is a ticket office. This is the only way to climb that can not be purchased via the Internet beforehand, it will buy on the spot. But there is never the queue because when you buy the ticket you can start to climb, there is no waiting to be expected on site. Rates are:


The descent, by cons, can be done by any of the 4 stairs, and it is even a recommendation to go down by another pillar than the South, it allows to see something else in the descent compared to the climb.

To the question "Is it tiring to climb the stairs?", The answer is yes, undeniably. It's not a sporting feat either, everyone can do it, but you have to climb at your own pace, calmly, because the road is long. The first part is going from the ground up to two-thirds of the climb to the first, a place where the shade of the floor extends everywhere. It feels like being crushed by the monument, it is the place of the tower where we see the best inside, its design, but it is also here that we feel the smallest in the face of its architecture, it really gives the impression of dominating us. ﻿ 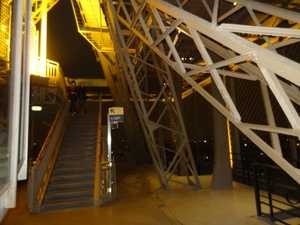 Start of the stairs

Start of the stairs 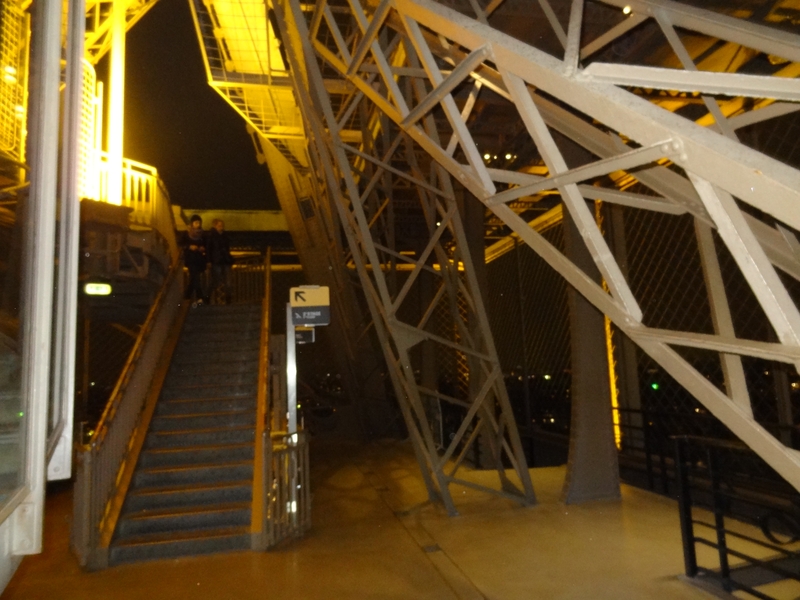 Start of the stairs going up to the 2nd floor

A little higher up and up to the first floor we enter the floor, which is still 7m high, and suddenly we pop up to "free air" (if we can say) on the platform that is protected only by a small padding. These outputs-inputs are sometimes barred, they are in maintenance or they are prohibited for any reason. Do not worry, there is always one open at least, and if the descent can be done in an elevator, even if we have a ticket to climb on foot.

From the first floor the staircase continues towards the second. As so far, these are flights of about ten steps in a straight line at the end of which a bearing allows to turn in the opposite direction for the next flight. The length of the bearings is always low, and it is variable depending on the height because the higher you climb, the higher the tower is vertical, so the bearings must be smaller. From there it is the height that is the most surprising. as soon as you leave the first platform the view is on Paris and its horizon, and you really have the impression of climbing to heaven in an endless staircase. When we approach the 2nd floor we have the same feeling of crushing as the first, but lower because the platform is smaller, but the arrival is very similar.

One of the things a little discouraging when you have the pride of having arrived on the 2nd floor and thus having passed the 720 steps, it is that this floor is composed of 2 levels, to go on the higher level there is still twenty steps ...


The staircase of the 3rd floor

Its removal, cutting and sale in sections

This staircase was laid at the construction of the tower in 1888 and 1889. It was spiral, the visitors were protected by a thin, relatively low railing, which gives the impression of being very fragile. The most impressive are those photos of the last century on which we see Eiffel at the top of his tower, 300m, standing nonchalantly at this tiny guardrail. He served quite a few years before being sentenced.

In 1983 it is dismantled and cut into 24 sections from 2 to 9 meters high, then auctioned piece by piece with the exception of 4 of them: One is on the first floor of the Tower, one went to the Musée d'Orsay, another to the Musée de La Villette, the last at the Museum of Iron History, Nancy. The sale of the other 20 pieces took place on the first floor of the Eiffel Tower on December 1, 1983. They all leave as predicted by the specialists of the subject, most in private collections, around the world.

At the initial sale in 1983 the singer Guy Béart had bought two. He had installed them in his garden, that of his house in Garche, near Paris. Perfectly maintained, he had to pour heavy blocks of concrete to ensure their stability. He sold them on March 21, 2015 along with a series of personal items, causing the end of the presence of sections of the Eiffel Tower in a private collection installed in France. It was the last one.


Where are the sections today? 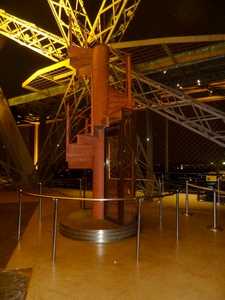 Section of the 3rd floor staircase

Section of the 3rd floor staircase 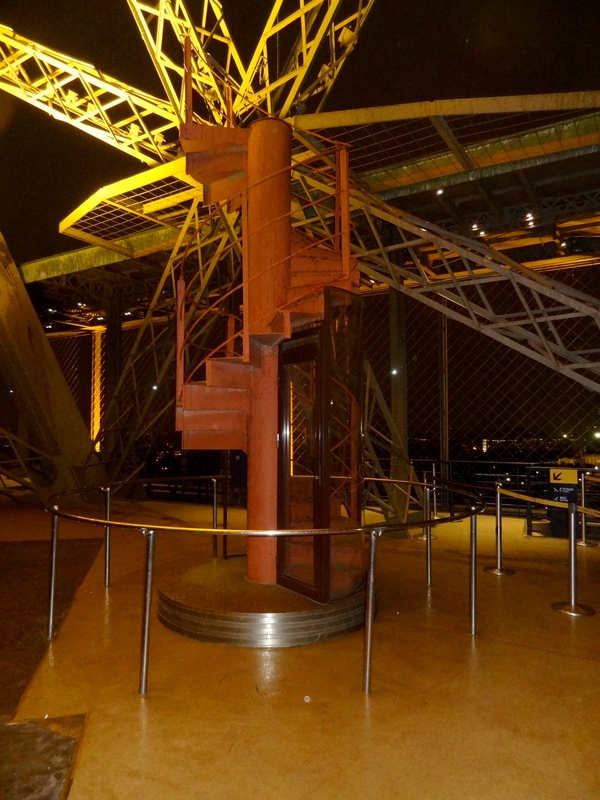 Section of the stairs of the 3rd floor, exposed today on the 1st floor

They are located all over the world, but circulate a lot through purchases and resales. One section is found in the Yoishii Foundation Gardens in Yamanashi, Japan, another near the Statue of Liberty in New York, while another section is in Disneyland. The city of Levallois-Perret has bought one (It is in this city that rests Gustave Eiffel). The City of Nogent-sur-Marne did the same. Most are in private collections in Canada, Switzerland, Italy and Brazil. The sculptor César, meanwhile, recovered in 1983 elements from the work of lightening the tower for his sculpture-tribute to Eiffel.


The vertical of the Eiffel Tower

This is an original foot race since it consists for the participants to go as quickly as possible from the ground to the 2nd floor of the tower.

The Verticale de la Tour Eiffel is a complete climb of the world's most visited monument, the "vertical km" of the EcoTrail de Paris®. It is a race format ultra fast, timed, on the model of a time trial. 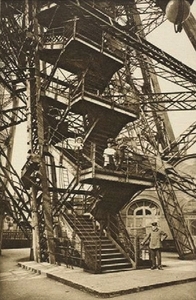 Staircase in the 19th century

Staircase in the 19th century 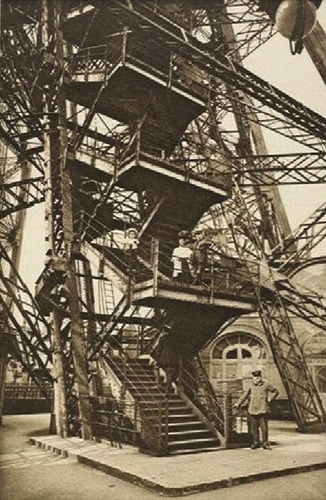 In 1900 the tower was renovated the first time, the stairs have undergone some changes, here is the explanation, given by Gustave Eiffel himself.

The elevator of the South pillar is removed and in its place is installed a wide staircase used to perform descents from the first floor; the two existing staircases at the east and west piers will be assigned only to the ascent, and this service will be doubled relative to what existed in 1889. In addition, the four small spiral staircases, from the first to the second, whose use was not practical, will be replaced by a large single staircase located in the South stack in extension of the new staircase.

The two staircases of the East and West pillars from the ground to the first platform were modified when they left the ground, because of the existence of the accumulators of the new elevators, which during their uphill race come to occupy the location of the old stairs. The starting flight bypasses the location of the accumulators and at a height of about 6 m joins the old staircase. This arrangement is shown for the West pillar in Figures 12 and 13 of the board XLVI.


From the ground to the 1st floor there are 14 revolutions of 3,666 m of height including 24 steps, plus a starting flight on the ground, of 21 steps, and an arrival flight of 7 steps, in all 564 steps. For the part of the 1st to the 2nd floor whose width is 1.50 m and whose large flights have no bearings, the revolutions, numbering 15, also have 3,666 m of height including 24 steps of 152,7 mm; but the width of these differs according to the position of the revolution on the road. The starting flight on the 1st floor includes 14 steps and the arrival on the 2nd includes 7, which gives between 1st and 2nd 381 steps.

The total number of steps between the ground and the 2nd is therefore 745. This new staircase replaces, by offering much more convenience, the old spiral staircases placed in each of the pillars, which are no longer accessible to the public.