﻿ ﻿ Planning of the construction of the Eiffel tower

Planning of the construction

This document is the copy of the book "The tower of 300m" that Gustave Eiffel wrote in 1900 to detail the different stages of the construction of his tower, but also to provide the technical data, the scientific experiments that were made, in short, to give a little all the information on this tower.

The construction schedule is more succinct than what is indicated in the timeline of events, that's normal, it's gives only the construction steps, with milestones and technical data related to these milestones. But it gives a good idea of these milestones, precisely. The figures below are taken from the weekly reports submitted by the yard service. 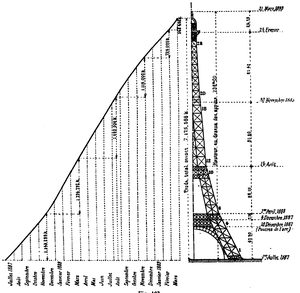 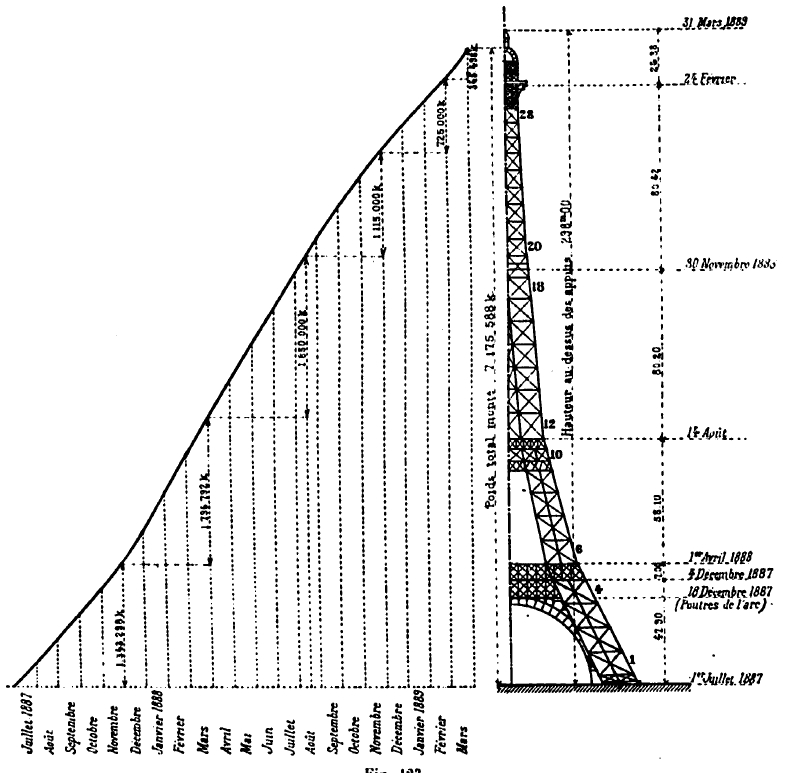 Decorative arches were erected from May 7th to August 31st, and most of the time is in this period.


Basements were erected (164,492 Kg) from September to January 1889, and three quarters of this total was occupied during this period.

The assembled total is therefore 7,175,588 kg. This assembly lasted from the 1st of July, 1887, to the 15th of April, 1889, that is to say, twenty-one and a half months, with an average of 334 tons per month. The diagram above, figure 123, indicates the course of this assembly, which, a little slow at first, then walked with the greatest regularity, but less rapidly nevertheless towards the top, because of the greater exiguity of the plates. mounting forms. The weight above does not include the one of the cast iron supports, which is 165 628 kg, nor that of the mechanical organs of the elevators, which amounts to:

The elevator Édoux was assembled by the assemblers of the manufacturer. The installation of machines and pumps was made from February 11, 1889 to April 10. As for the partial duration of the main operations of the assembly of the superstructure, it was the following:

Construction of the Eiffel tower