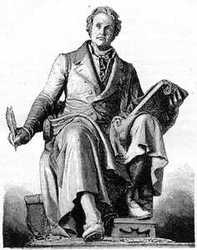 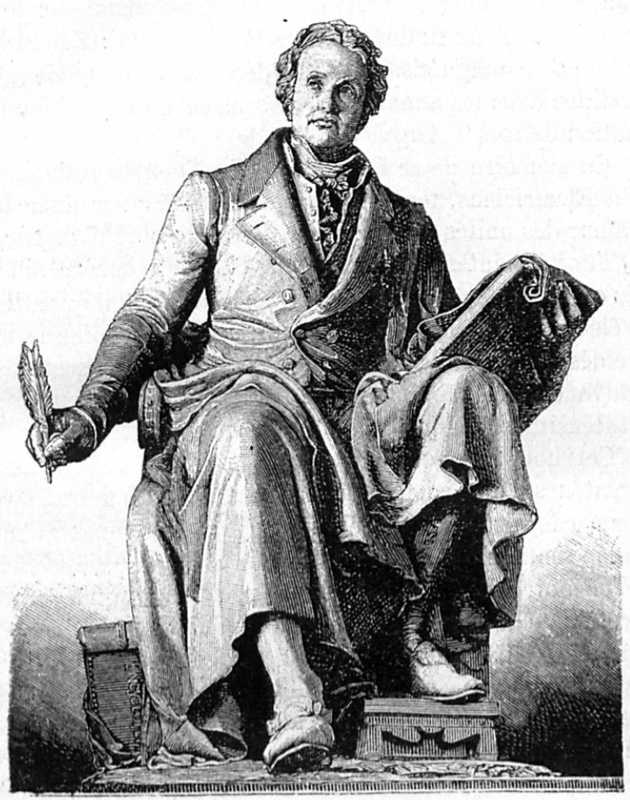 André-Marie Ampère is one of 72 scientists whose name is on the first floor of the Eiffel Tower. He is the 13th, on the side facing the Trocadero.

André-Marie Ampère, mathematician and physicist, was born in Lyon, on the parish of Saint-Nizier, January 22, 1775, Jean-Jacques Ampère, merchant, and Jeanne-Antoinette Sarcev de Sutières. He died in Marseille July 10, 1836. After teaching physics at Bourg-en-Bresse (Ain), where he wrote his Considerations on the mathematical theory of the game, he was appointed professor at the college of his hometown, then he came to Paris first as a tutor and then as a professor at the Ecole Polytechnique. Successively advisory member of the Council of Arts and Crafts in 1806, inspector general of the University in 1808, member of the Institute in 1814, and in the coming years, corresponding to all the learned societies of the civilized world, filled with honors and of distinctions, Ampere, however, escaped the shine, the noise, and felt happy only in his modest laboratory, situated in the house bearing No. 19 of the Rue des Fosses Saint-Victor, in Paris. This building disappeared to make way for the passage of the rue Monge, pierced under the Second Empire. It is from here that one of the most fruitful discoveries of modern science has emerged, that of dynamic electricity, which is based on the combination of the electro-magnet. It was done with the collaboration of Arago. At the same time that it created electric telegraphy, it became the source of all the marvelous applications of contemporary electricity.

In 1819, Ersted, an illustrious Danish physicist, had observed that if a wire, traversed in its length by a current of electricity, is placed parallel to a magnetized needle, movable on a pivot, the needle leaves the magnetic meridian and crosses with the wire. But this phenomenon offered various incidents, according as the needle was or was not astatic, that is to say according to whether the influence of the earth acted or did not act on it, and according to the current direction and the relative positions of the magnet and wire.

Ampere, with a deep genius, penetrated these various problems and created an ingenious formula containing all the circumstances. After having multiplied the experiments, he discovered, on October 24, 1820, that the electric currents act on each other. It was, indeed, that day that he combined the first electro-magnet in a surge of sudden inspiration, aroused by a communication of Arago, made at the Academy of Sciences of Paris. Noting that a copper wire traversed by an electric current acquired the property of attracting iron, he conceived the idea of ​​plunging a tool into the spiral he held in his hand and through which a current flowed. The attractive force was increased a hundredfold. Thus the most valuable apparatus of physics was improvised by an instinctive movement of genius.

On this great fact solved by practice, Ampère has founded a new science, electrodynamics, by bringing together two notions hitherto distinct: electricity and magnetism. This discovery of genius is codified in the annals of science under the name of Ampere's laws.

In memory of this capital fact, the Universal Congress of Electricians, held in Paris in 1881, to fix the value of electric units, gave the name of ampere to the unit of intensity of a current. This is how we decided to call ampere-hour the amount of electricity going through a circuit for 60 minutes and to designate, under the name of ammeter, a kind of galvanometer, specially designed for the measurement of the electrical intensity that runs through a circuit.

This homage, which scientists want to give back to the creators of a science, by borrowing their names to form the scientific vocabulary, is obviously part of a noble sentiment. However, we think that it is against clarity and precision, and that it would be better to take the terms in the Greek language, as we did, for example, when we established the metric system. On this point, we are of the opinion of M. Berthelot, the illustrious creator of chemical mechanics and thermochemistry, a member of the Institute, who in the session of the Paris Academy of Sciences of September 23, 1889 , has submitted fair criticism on this subject. He rightly pointed out that while it is useful and necessary to define certain abstract units by characteristic words, there are, perhaps, some disadvantages in designating them by proper names, as we tends to do in electricity and mechanics, since a few years. This way of proceeding is contrary to the spirit that has guided modern science to our time. It risks removing from the expression of phenomena and laws its character of absolute generality, independent of persons, times, and nationalities. It is still capable of arousing competitions foreign to science, harmful to its true interests, besides being obscure and requiring a double effort of understanding.

That said, let us return to Ampere, who was a very broad mind, open to all intellectual conceptions, and who would surely have been of this opinion, from what we have learned from his character by Arago and his son, J.- J. Ampère. He was scarcely eighteen years old when he had already invented a universal language destined, by replacing the infinite number of idioms spoken on earth, to bring men together and consolidate peace. In 1834 he brought to light, under the title Essay of the Philosophy of Science, a new classification of all human knowledge, with an account of the course he had followed and the considerations which had inspired him. This book testifies to the power of his encyclopedic and metaphysical brain. It is a complete inventory of what we know, with deep and ingenious views.

Ampère's classification tends to establish a natural and true order in the distribution of science. It is not an alphabetical picture drawn with prejudice; it is an exposition traced by successive discoveries and gradual improvements.

Ampère tells in a lucid and scholarly foreword, the slow way in which this order was formed, as well as the occasion, the gropings, the indications appeared as and when studies. He shows how the constant symmetry of divisions and subdivisions, which at first sight would appear to be artificial, is connected with the very nature of our intelligence and draws its reason from the form and laws of our faculties.

Ampère dedicates the first part of his work to the development and justification of the principle in the order of the sciences which he calls cosmological, that is, relating to all the material beings of which the universe is composed. The second part completes this development as regards the noological sciences, that is to say, relating to the study of thought and human societies. He gives in the third part the principal results of his psychological observations which, going back to the years of his youth, will have to rank him among the contemporary ideologists, next to Maine de Biran, his friend.

A piece of Latin verse is attached to the final painting. She is dedicated to her son Jean-Jacques Ampère. Here is the translation:

To my excellent and well-loved son. - Summary poem. - Preliminary. To possess a profound notion of the universe, of its life, of its power, one must first of all be aware of its motion and extent; then comes the study of the elements that form it and the beings that inhabit it.

Ampère's verses are of excellent Latin, perfect precision and without drought. They reproduce the tone of Lucretius's lectures. Afterwards we read the prolegomena and the general picture of this new classification of human knowledge.

At the end of the year 1793 Ampere received a terrible commotion. He saw his father accused of sympathy for the aristocracy of Lyons, perish on the scaffold. He almost lost his reason, and in the long run he could only calm himself by devoting himself, with his accustomed passion, to poetry, music, and botany. While botanizing, he had to meet the girl destined to become his wife. Marriages of love are frequent among scholars, and often they are happy to the end, witnesses those of Gay-Lussac, Malus, Monge, and many others less famous, when the intelligence and the heart of the Wife put themselves at the height of the genius of 1 spouse. From this union, which was broken by the untimely death of Mr. Ampere, there was born a single child who became the consolation of the unfortunate scholar and who has been illustrated in letters and historical studies. It is J.-J. Ampère, died in 1864, member of the French Academy. The city of Lyon has solemnly erected, on October 8, 1888, in the presence of M. Carnot, President of the Republic, a beautiful statue at Ampère. It is due to the sculptor Charles Textor. It is she that our drawing reproduces The city of Paris gave its name to one of the streets of the right bank of the Seine. His eulogy was pronounced, on behalf of the Institut de France, by Alfred Cornu, a member of the Academy of Sciences. Two remarkable studies, which complement each other, have been devoted to the discoveries and writings of Ampère by Littré and Sainte-Beuve. His works have been published by the editors Bachelier and Mallet-Bachelier, the predecessors of MM. Gauthier-Villars and son.