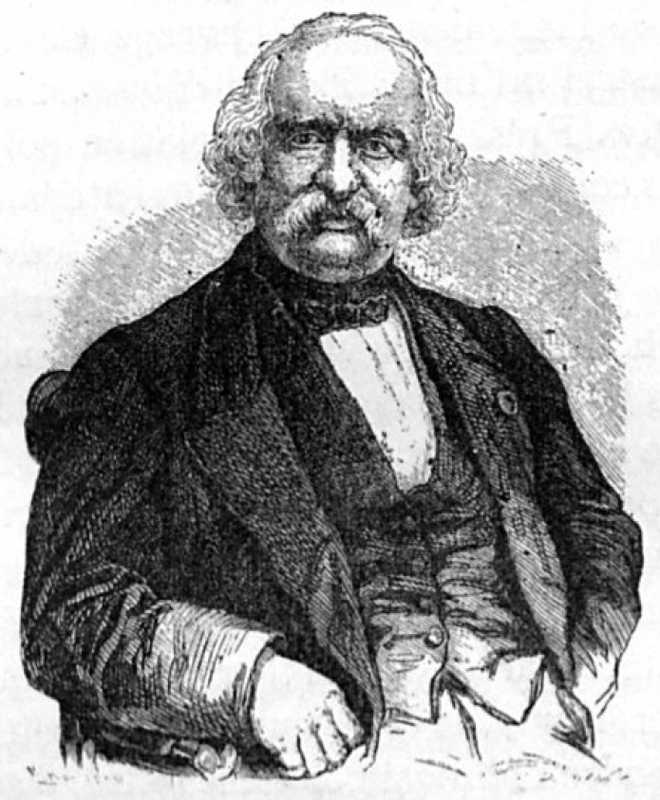 Auguste Perdonnet is one of 72 scientists whose name is on the first floor of the Eiffel Tower. He is the 4th on the west facing side.

Albert-Auguste Perdonnet, engineer, was born in 1801, in Paris. He died at Cannes in 1867. He studied at St. Barbara College, France, and then at the famous Pestalozzi in Yverdun, Switzerland. He entered the Ecole polytechnique in 1821, which he left before the end of regulatory studies in 1822 to become a simple civil engineer. With a fiery imagination and a very liberal spirit, he dreamed of great works and a very active life. He enlisted in the same way as the Flachat, Lamé. Pereire, Polonceau, Talbot, etc., and devoted himself to the construction and the exploitation of our first railways, which he occupied not only as a practitioner, but also as a theoretician. He was one of the first believers, and did not hesitate to give all his faculties, all his leisure, all his resources to these vast enterprises. Eloquent professor, daring in his developments and his predictions, Perdonnet was called a fool when he opened a railway course at the Central School of Arts and Manufactures, announcing the immense revolution that their establishment would provoke in our industry, in our commerce, in our habits, and that before a little time.

Perdonnet was director of the equipment of the left line of Versailles, when occurred the terrible accident of May 8, 1842, in which Admiral Dumont d'Urville died with many other victims. When he arrived at the scene of the disaster, his impression was so strong that his hair whitened in a few moments. He was barely forty-one years old. He had followed the lessons of Vauquelin, the illustrious chemist, and he liked to explain, with the theory of his master on this matter, the sudden discoloration of his abundant hair, a transformation caused by a lively emotion. Vauquelin, who died in 1829, had witnessed similar accidents during the Revolution, and, in a celebrated memoir presented to the Academy of Sciences on March 3, 1800, he assumed that in those moments of crisis when nature was upset, and where, consequently, the physiological functions are suspended or changed in character, an agent develops in the animal economy which, passing into the hair, breaks down the coloring matter. But which agent could produce this effect? Acids alone seem capable. What is certain is that black hair, immersed for some time in an acid, and especially in oxygenated hydrochloric acid, whiten very appreciably. The rapid production of an acid in the animal economy does not seem impossible, considering that a movement of anger in men, as well as in animals, is enough to change the nature of some of their moods and make them toxic and seeing that the electric fluid even determines in the animal and plant matters the formation or at least the development of an acid or an alkali, according to the circumstances. It is from the very mouth of Perdonnet, in 1803, that we have collected this very rational chemical theory, conformable to physiological laws. At that time, the famous engineer still had a beautiful and long hair, but a dazzling whiteness and that gave him really fresh air.

Perdonnet has left a considerable number of works on metallurgy and all that touches the multiple works of the engineer. His classic work is a masterly book entitled Basic Treatise on Railways. President of the Polytechnic Association, he made popular conferences that attracted the head on all issues of science and progress on the agenda. He was of a tall stature, speaking in abundance and in eloquent terms, leaving a deep trace in the memory of his listeners, who applauded him with enthusiasm.

Perdonnet has left a considerable number of works on metallurgy and all that touches the multiple works of the engineer. His classic work is a masterly book entitled Basic Treatise on Railways. President of the Polytechnic Association, he made popular conferences that attracted the head on all issues of science and progress on the agenda. He was of a tall stature, speaking in abundance and in eloquent terms, leaving a deep trace in the memory of his listeners, who applauded him with enthusiasm.

We remember a memorable event that portrays him as a whole. He had been asked to preside over the distribution of prizes at the end of the 1861 school year at St. Barbara College. When he arrived, a few moments before the ceremony, the director of this famous institution, Alexandre Labrouste, a literary, classical, very fine and witty man, who always prepared with the greatest care the excellent speeches he gave us every year. he looked at him anxiously, not seeing any paper in his hands, and asked him if he had thought of the president's impulse. "I have not prepared anything at all," replied Perdonnet, "and I do not even know what I am going to say to our children, it even depends on what you say yourself, since you speak first. I'll get away with it, and I'll even give you Latin quotations. " Alexandre Labrouste was appalled. It was the first time that a classic speech would have been delivered without having been matured and worked for a long time. And it was not without fright that he gave the signal for departure for the place of solemnity, where more than two thousand people were gathered. And an hour later, when he had finished the clear and clear reading of his speech, which we never lost a line, it is not without trouble that he says: "The word is to the president, the comrade Perdonnet. " Auguste Perdonnet rose, dominating the whole assembly with his tall stature, in a black frock, but with the Commander's cordon of the Legion of Honor, his breast covered with decorations, his white head, his piercing gaze. He exerted immediately a feeling of greatness on the audience. He looked at the audience and began with majesty.

Never had we seen such a spectacle, and our teachers found it a detestable example. Never, however, did we hear a speech so beautiful, so eloquent, so penetrating. It was the heart that spoke, and we know that it is an inspirer unparalleled. We had Latin quotations, even Greek ones, which earned him the indulgence of our dear director, who only half-pardoned him the immense success obtained against all the rules we were taught. "That does not prevent," said Alexandre Labrouste, "you have made me pretty frightened, but you will have to write me your speech so that we can have it printed in our report." "Never in life," replied Perdonnet; I do not remember it any more, but if you wish, I will compose another speech. "" I suspected it, "replied Labrouste," so we took care to stenograph your words. "

With a warm and generous heart, Perdonnet never ceased to welcome young scholars, with the greatest benevolence, and to patronize new ideas, useful innovations. He was a scientific apostle in all the force of the term. He has rendered services to progress and to the Central School of Arts and Manufactures, that fertile nursery of modern engineers, and whose direction he has held for several years until his death. The city of Paris has given the name of Perdonnet to one of the streets which adjoin the station of the railways of the East, on the right bank of the Seine. The portrait above was made from nature, in 1864, by Mr. H. Rousseau. The original belongs to Mr. L. Guiguet, draftsman of high merit, who for many years was one of the professors of the Polytechnic Association, presided over by Auguste Perdonnet, and who has rendered so many services to public education.