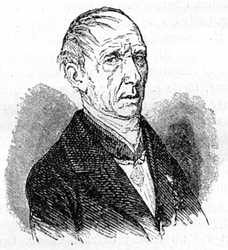 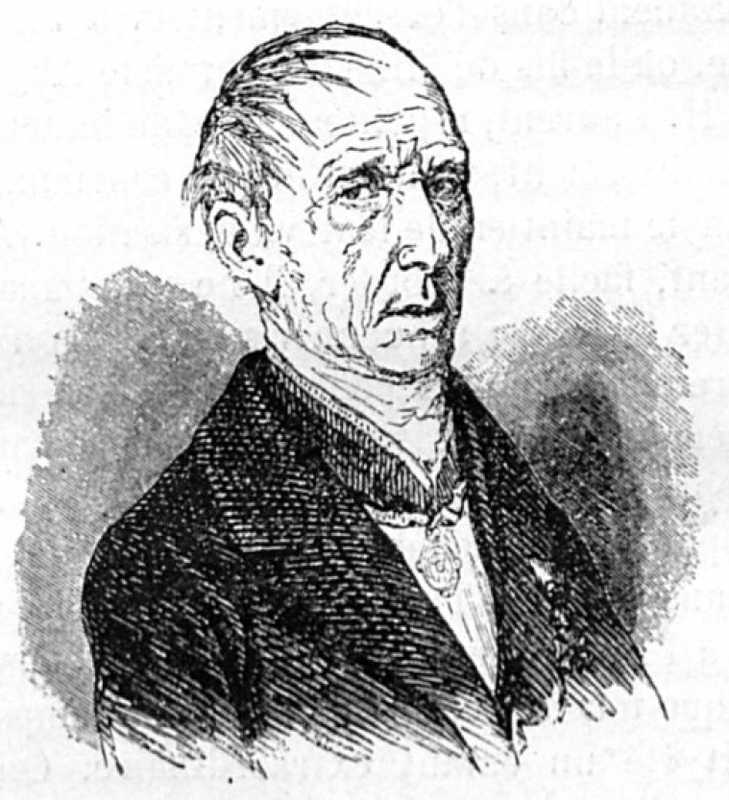 Augustin Cauchy is one of the 72 scientists whose name is inscribed on the first floor of the Eiffel Tower. He is the first, on the face turned to the South.

Augustin-Louis Cauchy, mathematician, was born in Paris on August 21, 1779. He died in the same city in 1857. Received at the age of fifteen at the Ecole polytechnique, the second, in 1804 (at that time he there were no age limits), he entered the Ecole des Ponts et Chaussées and the Corps of Engineers. But he soon gave up the exercise of his job to engage in teaching and studying mathematics. In 1816 he was elected to the Academy of Sciences, a little over twenty-five years old, and at the same time was appointed Professor of Mechanics at the Ecole Polytechnique. Having lost this last situation, because of refusal of oath, after the Revolution of 1830, he went to Prague in 1832, to direct the scientific education of the young Duke of Bordeaux, destined to keep in history the names of Count of Chambord and Henry V, without having reigned. In 1838 he returned to Paris and was called to be part of the Bureau des longitudes. Louis Philippe did not wish to ratify this nomination. The Republic of 1848, which was the largest, the most generous and the most tolerant of all the governments we have had in France since 1789, repaired this injustice by placing Cauchy in the chair of mathematical astronomy of the Faculty of Sciences of France. Paris, although he was a legitimist declared in private life.

Algebra and mechanics are indebted to Cauchy for many improvements. Highly fertile, this original and profound scholar has published more than five hundred memoirs in the Institute's collection. Note among the most famous those whose titles follow: Method to determine a priori the number of real roots (1813); - Theory of the waves (1815); - Application of the calculation of residues to the solution of the problems of mathematical physics (1827); - On the dispersion of light (1834); - Development of functions in ordered series according to the ascending powers of the variables (1846). He has assembled in two volumes his very remarkable lessons on the Applications of the infinitesimal calculus to geometry.

Cauchy has been an eminent mind. Analyst, thinker, mathematician, practitioner, schoolmaster, teacher, writer, he left deep traces in science, and although there are some of his ideas too spiritualistic perhaps, his doctrines have remained alive and fruitful for the most part. They dominate in teaching and at the Ecole polytechnique, where the son of the famous chemist Auguste Laurent, M. H. Laurent, repetiteur and examiner in this great establishment, constantly watches over and insists on the maintenance of their popularization. Affable and benevolent, easy to approach, he could never leave the floor to any visitor. If he was interested, he took the pen to look in his own way for the problems and truths brought to him; he kept his word, for listening was always impossible for him, so much was his brain overflowing with innumerable thoughts. An indefatigable worker, Cauchy presented twenty times more reports to the Académie des sciences than all his colleagues, on a regular basis. He had been an extraordinary child. It can be compared to Pascal for the precocity in works where, usually, it is necessary the complete development, even the virility of the intelligence. His first years were in his family, and he was the work of his father, a very distinguished man, who wanted to remain for a long time the only teacher of his four sons. Passionately fond of things of intelligence, he had inspired them with a true love of learning. The taste and mathematical aptitudes of Augustin Cauchy were revealed early, as his notebooks testify, in which his literary works are frequently interrupted by calculations or geometrical figures.

His arrangements were so remarkable that they attracted the attention of Laplaceet de Lagrange, who often saw him studying in the cabinet of his father, then Secretary-General of the Senate. One day when the second of these two scientists was present at the same time as Lacpede, he suddenly said: "Look at this little young man, well, he will replace us all as a geometer."

Augustin Cauchy was then barely twelve years old. Lagrange was very much afraid that these surprising arrangements would be abused, and he insisted on giving him a solid literary education "If you do not hold hands firmly," he said to his father, instinct will entice him, he will be a great mathematician, but he will not even be able to write his language. "

The personal tastes of Mr. Cauchy Sr. were too much in agreement with these wise counsels that he would not go there willingly. So, after having his elementary studies done under his immediate direction, he sent him to the Central School of the Pantheon. Augustin Cauchy always ardently applied to literary studies the faculties so vivid in his intelligence. In 1804, a few weeks before being received at the Ecole polytechnique, he finished his classical studies by winning the grand prix of humanity at the first distribution of the Concours General.

The works of Augustin Cauchy were published in twenty-six large volumes by the house Gauthier-Villars and son, under the scientific direction of the Academy of Sciences, to which he had belonged for many years, and under the auspices of the Ministry of Public Education. A very remarkable study has been written about his life and his discoveries by M. C A. Valson, a former professor at the Faculty of Sciences of Grenoble, dean of the Faculty of Sciences at the Catholic University of Lyon. In addition, Academician Babinet, of scholarly and spiritual memory, focused on Cauchy, in the Revue des Deux-Mondes, the following judgment that posterity has ratified: "The mathematical sciences made a great loss in 1857. Death struck the illustrious Cauchy, who had embraced in his works all the parts of mathematics, preserving in each of them an incontestable superiority.He had the feeling of analytic abstractions, as the bees have the instinct of the construction and I often had with him endless conversations from which I came out more and more amazed at the high range of his genius, I had told him about the calculation of the perturbations of the planets whose revolutions are for the duration in simple reports, like, for example, the planets Isis or Hebe, which take twice as long as Mars to go around the Sun, or the planet Daphne, which makes three revolts against one that Jupiter does. The question, according to all, is very difficult, but if it had been decided by someone, it would have been done by Cauchy. France lost in him the author of works of the first rank, and, besides, those which he had still executed. Cauchy assured France the first rank among mathematicians, and the dignity of character rivaled him in the depth of meditation. As Fontenelle said of Leibniz, there was in him the stuff of "many scholars."

One of the streets of Paris, on the left bank of the Seine, has received its name. The portrait that represents him was drawn on nature, in 1851. He was then 65 years old. He was communicated by his nephew Mr R. Cauchy, advisor to the Court of Accounts, son of the younger brother of Augustin Cauchy, Eugene Cauchy, died in 1877, member of the Academy of Moral and Political Sciences.