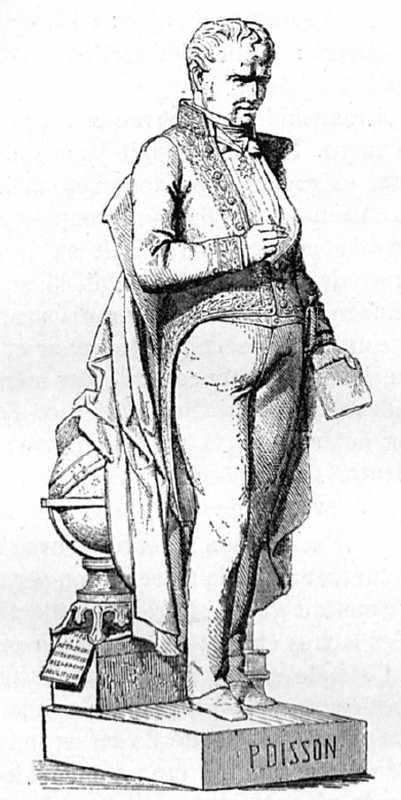 Denis Poisson is one of 72 scientists whose name is on the first floor of the Eiffel Tower. He is the first, on the face facing east.

Siméon-Denis Poisson, mathematician, was born in Pithiviers, today chief town of district of the department of Loiret, on June 4, 1781. He died April 25, 1840, in Paris.

Aged seventeen, he was first received at the Ecole Polytechnique at the end of 1798, for which he had prepared himself almost alone, without the help of numerous professors. His father, as district president, regularly received a copy of the periodical of this large nascent school. A passionate lover of reading, the child captured the pamphlet and found there the statement of questions which he solved diligently. This exercise developed the mathematical talents that nature had placed on guard in the vast head of the one who was destined to become one of the scientific illustrations of France. On leaving the school, Poisson was warmly recommended by Lagrange, and shortly thereafter he was entrusted with the duties of repeater at the beginning of 1800. In 1802 he became substitute professor and a full professor in 1806. In In 1808 he was elected astronomer at the Bureau des Longitudes, and in 1809 he was appointed professor of rational mechanics at the Faculty of Sciences of Paris. Successively, in 1812, in 1815, in 1816, in 1820, in 1827, he was appointed Examiner of Exit at the School of Saint-Cyr, at the Ecole Polytechnique, Surveyor of the Bureau of Longitudes, Adviser of the University. On March 23, 1812, he was elected a member of the Academy of Sciences.

These various jobs, filled simultaneously, gave Poisson a great ease, and gave him ample leisure to devote himself to mathematical, physical, and astronomical research. It was then that he produced his memoirs on elimination, differential equations, the calculation of variations, the curvature of surfaces, the calculation of probabilities, and then his researches on general physics, terrestrial physics and electricity. Magnetism, capillarity, the laws of the equilibrium of the elastic surfaces, the invariability of the sidereal day, the motions of the moon around the earth, and c. Poisson was not only a profound geometer; he was an extremely remarkable teacher. He used to say, "Life is good only for two things: to do mathematics and to teach them."

Fish has collected touching memories about her father and mother. He never failed to send to the first a copy of all the memoirs he published. The former soldier, although totally foreign to mathematics, read it daily. The introduction, which presented the history of the question, eventually disappeared under the continual friction of the fingers turning and turning the pages. But the central part of the memoirs, where there were signs of differentiation and integration, was less deteriorated; there, evidently, it was evident that the father had frequently remained in contemplation before the son's work.

As for his mother, Poisson wrote to him with great regularity, especially after the death of his father. The humble woman did not put much expense in her answers. His letters were copies of his son's, with a simple change in the pronouns. If Poisson had written: "I am preparing a memoir of astronomy, I will then take care of the second edition of my Traité de mécanique, etc.", we were certain to find in the maternal answer: "You prepare a memoir of astronomy, then you will deal with the second edition of your Treatise on Mechanics, etc. " It was the naive imprint of the profound admiration that the mother professed for her beloved son, admired by the learned world.

Recall that it is hardly admitted to the Polytechnic School, that Poisson found a simple, concise, elegant demonstration of an important theorem of algebra, relating to the elimination, on which the analysis had not yet produced that a huge volume, and almost illegible. Laplace wanted to know a surveyor who was starting so prematurely. A few minutes of conversation increased the high opinion that the reading of the Memoir on Elimination had already inspired him. His hopes, the author of the Celestial Mechanics immediately characterized them in a manner at once energetic and familiar, by these verses, past proverbs, of Jean de Lafontaine:

We have seen what happened to the future great geometer. This work was the first and brilliant ring of the long series of Memoirs, numbering 351, which were cataloged by Poisson himself and which gave him such an eminent rank among the scientists of the nineteenth century. J.-A. Barral reproduced this list in the second volume of the works of François Arago, following the praise of Poisson.

The city of Pithiviers raised a statue to Poisson, due to Deligand and melted by Charnot, on June 15, 1851, on one of its public places. This photo is reproduced here. One of the streets of the city of Paris, on the right bank of the Seine, bears his name.