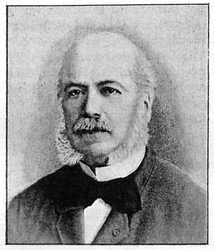 Ernest Gouin is one of the 72 scientists whose name is inscribed on the first floor of the Eiffel Tower. He is the 9th, on the face facing east.

Ernest Gouin, engineer and industrialist, was born in Tours (Indre-et-Loire), on July 24, 1815. He died in Paris, March 23, 1885. Upon leaving the Ecole Polytechnique in 1836, he was ranked the first in the staff. He resigned to enter the School of Bridges and Roads. The great industrial movement, characteristic of the end of the nineteenth century, was beginning to take shape. The railroads and steam navigation occupied all intelligences. Ernest Gouin went to England to complete his technical studies. After a stay of a few months in the most famous mechanical workshops, he was charged by Mr. Clarke, director of the traction of the Paris railway at Orleans, then under construction, the control of the execution of the locomotives that this company had commissioned at Sharp's workshops in Manchester. It was there that his vocation was decided. It was soon to take a considerable part of Europe in the industry of mechanics, metal constructions and railways.

From 1839 to 1845, Ernest Gouin was an engineer of traction and workshops of the lines of Paris in Saint-Ger-main, Versailles and Saint-Cloud. These little lines, which seem little present, were the nursery of the highest personalities of the world so considerable railroads. To have occupied one of the first ranks in this tiny company with Flachat, Pereire, Perdonnet, Le Chatelier, Lamé, Marc Seguin, Clapeyron, Polonceau, etc., is a title of honor. Many experiments were made there. It was there that the application of the atmospheric pressure to the propulsion of the trains was attempted, where the first electric telegraph was installed. Ernest Gouin was the engineer of atmospheric machines, machines colossal for their time. He went to London to study the first telegraph apparatus which he brought back to France and installed on the line of Saint-Germain-en-Laye.

In 1816 he founded his magnificent locomotive and spinning machine workshops at the Batignolles; three years later, he introduced the iron bridges in France, and a few years later he founded shipyards in wood and iron, by sails and steam, at Nantes, on the banks of the Loire. Ernest Gouin was not only one of the principal builders of France, a great industrialist with vast ideas, it was still a generous heart, whose beneficence was inexhaustible, a mind open to all progress, to all new ideas.

The workshops he has created at the Batignolles have produced remarkable works, including the Asnières, Mâcon, Culoz, Szegedin, and Pesthen Hungary bridges, the Po in Italy, the Moerdyck in Holland, and a large number of others in Romania, Russia, Australia, Algeria, Senegal. At the execution of these important works of art, he soon joined the study and the construction of railway lines, like those of the crossing of the Pyrenees near San Sebastian, the Apennines near Naples, the Carpathians in Romania, the Tyrolean Alps, the Bône Guelma network in Algeria and Tunisia, the Dakar Saint-Louis in Senegal and many local railways in Belgium and France.

Ernest Gouin was president of the Labor Court of the Seine, absorbing and delicate function, president of the Paris Chamber of Commerce from 1873 to 1878, and city councilor of the capital for 15 years, from 1860 to 1875. When he died, he was commander of the Legion of Honor, regent of the Bank of France. He left an eminent son, Mr. Jules Gouin, who continues his work and his traditions.

Eloquent words were uttered at his funeral by Ernest Fouquet, engineer of the most distinguished, and by Emile Augier, one of the Forty of the French Academy. It is the famous author of La Ciguë and the Aventurière who recalled this admirable word of Chancellor of the Hospital, about the immense charities of Ernest Gouin: "Remember that you will not take up there what you have given here below. " The portrait of this page was executed on a photograph of Ernest Goiiin at the age of 60.