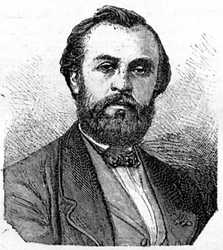 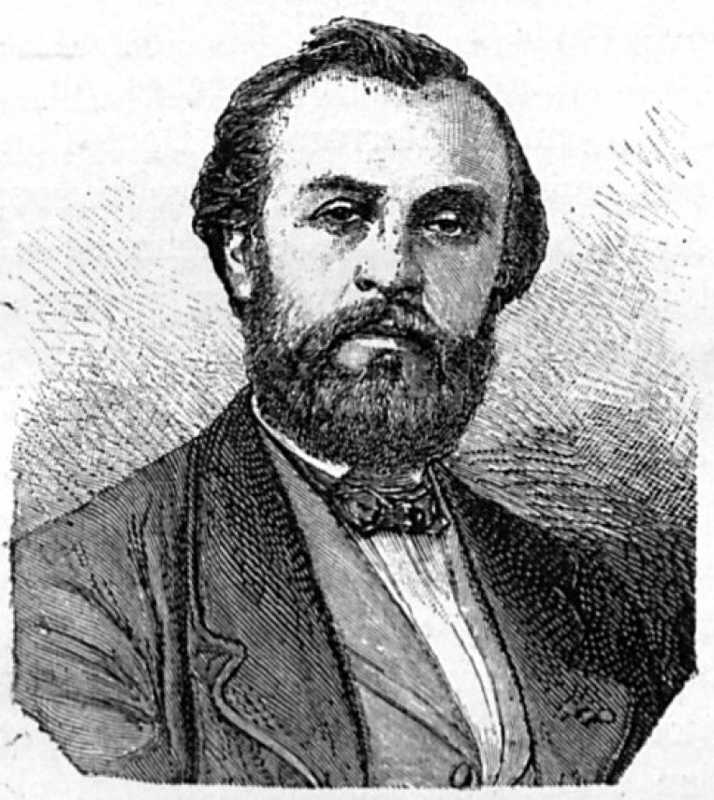 Henri Giffard is one of the 72 scientists whose name is inscribed on the first floor of the Eiffel Tower. He is the 13th on the west facing side.

Henri Giffard, engineer and inventor, was born in Paris on January 8, 1825. He died in the same city on April 15, 1882. He studied at Bourbon College, today a high school Condorcet, and immediately entered the workshops of the Saint-Germain-en-Laye railway. He had been driven to seek this modest situation by an irresistible passion for mechanics. By the age of fourteen, he found a way to go truant to see the wagons maneuver in the train stations. He was already burning with the desire to drive a locomotive. He soon succeeded, and he had the bitter pleasure of sliding the first trains of the Western Railway as fast as he could on the rails. He felt the incipient and indomitable passion of the mechanic for his machine. that M. Emile Zola has so brilliantly and truthfully described in his admirable novel The Human Beast.

Henri Giffard was educated alone, by the practice attached to the study he made in his youth of the notebooks of young friends he had at the Ecole Centrale. This was the only competition he got for acquiring the indispensable principles of science. But he was always animated by a need for invention and research, which no distraction could ever interrupt. Endowed with an unusual ability of fingers, thin, nervous, supple, agile, sober, he knew how to do everything by himself and used every object to turn it into a mechanism. It was thus that he was surprised to disembowel an armchair in his closet to snatch a spring which he needed for an experiment; it is still how he was made to make a photometer with two pencils fixed in the cardboard of an almanac, in order to make a demonstration succeed quickly.

At eighteen, Henri Giffard made his first invention. It concerned the air navigation and was to lead it, in 1852, ten years later, to realize one of the most memorable experiences of the scientific history of the nineteenth century. The aerial ascents at great heights, neglected since those of Gay-Lussac and Biot, in 1804, had been put back in honor by those accomplished in June and July 1850 by Barral and Bixio. It involved the construction of an airship, elongated, 44 meters long and 12 meters in diameter. This new kind of airship was 2,500 meters high. It was equipped with a propeller propeller and it was powered by a machine of the force of three horsepower. Henri Giflard rose alone in the air, and succeeded the first to deviate substantially from the line of the wind, Henri Giffard was to repeat this experiment in 1855, and never give up the study of the great problem of air navigation. In 1867 it was he who built the first steam captive aerostat. In 1868 he built a second one, which was 12,000 meters high, which he had installed in London, which caused him a loss of seven hundred thousand francs, a loss he felt without uttering a single complaint or regret. In 1878, he did not hesitate to build his large 25,000 meter steam captive balloon, which remained as one of the masterpieces of modern mechanics. What would he not have done for the World Fair of 1889, to fight wonders with this wonderful Eiffel Tower which has inscribed his name with pride on its audacious flanks!

Henri Giffard was able to face all these colossal expenses by the money earned by the invention of his injector. In a few years he had become a millionaire several times, and money constantly poured into his hands, making it the most noble, useful, and the most agreeable to his tastes. The injector Giffard is, indeed, one of the great mechanical discoveries of our century. Its principle is so surprising, singular, that thousands of devices have worked before mathematicians have been able to give a clear and satisfactory theory. This small mechanism, which allows all machines to feed automatically, has remained as it was originally created in 1858. It is now a universal job; all locomotives around the world are equipped with them.

In 1876, the National Industry Incentive Society awarded Giffard the Prony Medal of the Mechanical Arts for the invention of his injector. When, in 1861, the creation of this apparatus was officially announced, the surprise was general; she redoubled again when we knew her mode of action. Nothing had made possible the possibility of curious results obtained at the first attempt. Some experiments of Venturi had made known the training of the liquids; but it was strange and worthy of admiration to observe that the pressure of the steam of a boiler could be used directly, in spite of the internal pressure, to penetrate the water of supply into this boiler. The outgoing steam can not enter by the mere fact of the conversion of the work corresponding to its pressure or force. But when, when moved with great speed, it communicates this living force to the water with which it is merged by condensation, the latter easily penetrates by its shock, when its mass is in a suitable ratio with the quantity of condensed vapor. . There is no heat loss by feeding the boilers using the Giffard injectenr, because all the heat contained in the steam returns with the water in the boiler.

Henri Giffard has yet invented a suspension mode for wagons, which is extremely soft. He indicated the means of manufacturing hydrogen industrially using water vapor brought into contact with pulverized iron ore. He perfected a host of common inventions. In 1859, the Institut de France awarded him the Grand Prix de mécanique. Disdainful of honors, without ambition, especially without a fight, Henri Giffard died without a minister thinking of decorating him. As for him, he never thought of it. To work, to invent, to do good, it was his only satisfaction. He always made, as we have said, a noble use of his fortune by encouraging the sciences, industry, endowing the poor scientists, by sponsoring the new discoveries, the scientific journals, some of them without him. could not have escaped the painful delays of the period of foundation. In dying, he left by will 100,000 francs to the poor of Paris, 50,000 francs to the Academy of Sciences, and sums identical to the Society for the encouragement of National Industry, to the Society of Civil Engineers, to the Society of Friends of Science, 100,000 francs to the staff of the house Flaud, and innumerable pensions and legacies to friends, collaborators, servants, and after having made a large part of his family, he thought he would do well by leaving several millions of francs to the State, expressing the wish that this considerable capital should be devoted to scientific works.

Since 1882, the state, this great carefree, has not yet managed to achieve a single useful and fruitful application. For Henri Giffard, only one thing was done: his name was given to one of the streets of Paris, on the left bank of the Seine. Lean honor for so much generosity and wonderful inventions!

The portrait above is the reproduction of a portrait executed in 1863. Henri Giffard was then thirty-eight years old. When he died, he was fifty-seven years old. The decoration he wears is a foreign ribbon. No one is a prophet in his country, says the proverb. Henri Giffard has left a brother, inventor too.