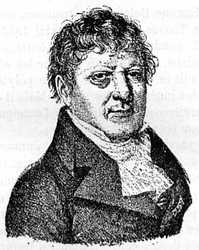 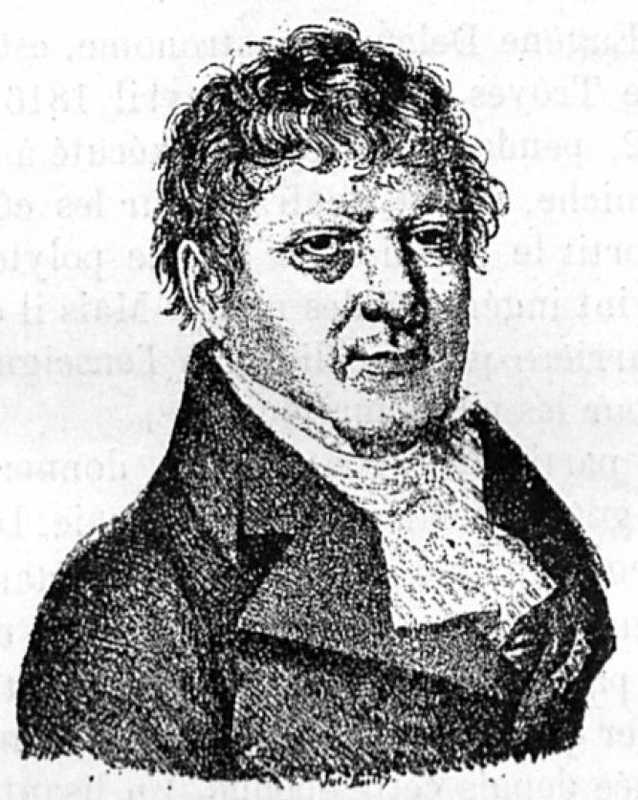 Jean-Baptiste Delambre is one of 72 scientists whose name is on the first floor of the Eiffel Tower. He is the eighth, on the face facing east.

Jean-Baptiste Delambre, astronomer, was born in Amiens on December 19, 1749; he died in Paris on August 18, 1822. A brilliant scientist, his high faculties did not awaken until very late. He was not less than thirty-six years old, indeed, when he began to study under Lalande the science which was to immortalize his name. But his beginning in the scientific career was a master stroke. His tables of Uranus earned him in 1790 the prize of the Academy of Sciences of Paris; two years later, when he presented to this learned body his satellite tables of Jupiter and Saturn, he was unanimously elected member.

The Constituent Assembly having decreed the establishment of the new metric system of measures, Delambre received in 1791, with Méchain, the mission to measure the arc of the terrestrial meridian between Dunkerque and Barcelona. This important operation was continually interrupted by the great political events which took place at this memorable time; it could not be finished until 1799. Napoleon, to reward him, appointed him chevalier of the Legion of Honor in 1804 and entrusted him, in 1808, with the functions of treasurer of the recently created University. Delambre was a free spirit, like Jerome Lalande, Etienne Geoffroy Saint-Hilaire, Lamarck. He left a History of Astronomy, which unfortunately is unfinished. He died while he was finishing the first part, which is a masterpiece, from the point of view of science as literary value. Delambre had been well prepared to compose such a work. He had studied at the College of his native city, where he knew Father Delille, then a simple repeater of the Latin classes. He had become, under this elegant master, a very strong humanist, a shrewd Hellenist, a brilliant writer. He proved it all his life, in all his books, and especially as perpetual secretary of the Academy of Sciences. Charged with these functions of writing the annual and general history of mathematics and appreciating the talents and works of his deceased confreres, he fulfills this duty, always in the most literary terms. It is also known that he wrote the articles on ancient and modern astronomers in Michaud's Biographie Universelle. He did it with a modesty equal to the depth of his science. Read it to realize it, the notice he devotes in this famous encyclopedia to his collaborator Méchain. One would not suspect, if one did not know it, that it was Delambre who shared the work of Méchain, or to speak more exactly that it is to himself that the greater part is due. of their design.

The praise of Delambre was pronounced by Cuvier, Biot, Arago, three good judges in the value of men and discoveries. A characteristic feature of Delambre was reported by Cuvier, who related that when he felt his end approach, he reviewed his extensive correspondence, apart from all the letters he had received from each of the French and foreign scientists with whom he maintained an epistolary trade, and begged his wife to teach each of them that he could claim his letters or order their destruction.

The city of Paris gave the name of Delambre to one of the streets of the left bank of the Seine. The portrait of our book was executed after an engraving of Louis-Leopold Boilly, made on nature in 1803.