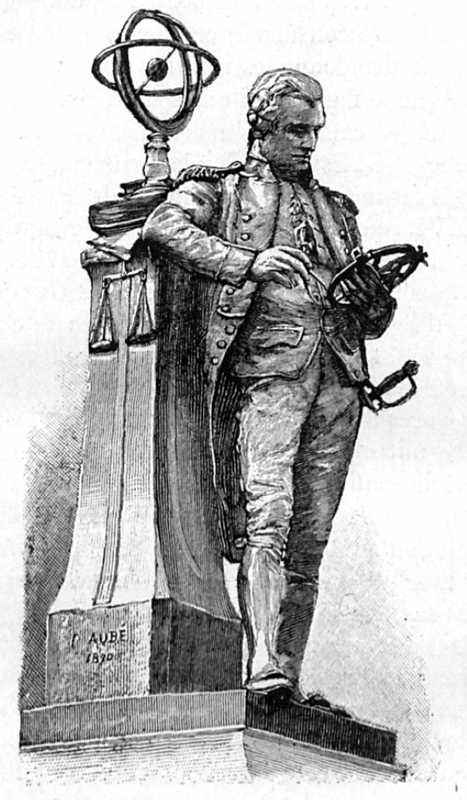 Jean-Charles de Borda is one of 72 scientists whose name is inscribed on the first floor of the Eiffel Tower. He is the 12th on the west facing side.

Jean-Charles de Borda, mathematician and navigator, was born in Dax on May 4, 1733; He died in Paris on February 20, 1799. A learned physicist and profound mathematician, an excellent sailor, after having provided a brilliant career in maritime expeditions, which were particularly remarkable in the eighteenth century, he was employed in the great ports of France. This stable situation enabled him to give a fruitful rise to his taste for the mathematical and mechanical sciences.

When the Constituent Assembly of 1789, in order to create a new system of weights and measures, established on the metric measurement, ordered that the length of an arc of the terrestrial meridian be determined with precision, Borda was designated, with Delambre and Méchain, to execute this delicate operation. It was he who directed all that was connected with the physics experiments and who proposed to use the platinum to fix in an invariable way the measurement of the bases.

Borda was a fruitful inventor. It is to him that we owe the creation of the repetitive and reflective circle, so useful especially in taking angular distances at sea, the double weighing method, metallic thermometers capable of indicating the most minute variations of temperature, and the ingenious apparatus which gives the exact length of the pendulum. All these creations brought about serious progress in experimental physics and found almost immediate applications in the Egyptian expedition, which was so brilliant in scientific results.

It is with reason that Borda is offered as a permanent example to the youth, and that the ship-school of our future naval officers bears this name as the flag of true science, profound and severe, devoted to innumerable maritime phenomena. Borda is also one of the greatest surveyors that France has produced. Biot made of him this portrait: "He must be regarded as one of the men who have contributed most to the progress of nautical art, both by the advanced instruments he has given to the sailors, and by the skill with which he has been able to bring geometric methods closer to them, without taking away from them any of their precision.The period to which he published his observations must be considered as the time when the French sailors abandoned the routines of ignorance for to be guided by the torch of an exact science. "

Borda made the maritime campaigns of 1777 and 1778 with the Count d'Estaing. On the recommendation of the latter, he was appointed major general of the naval army. Louis XVI, who loved the geographical sciences, became interested in Borda, and in 1781 he entrusted him with the command of the ship the Warrior, and in 1788 he sent him to escort with the Solitaire, 74-gun ship, a corps of troops that were sent to Martinique. When he arrived at his destination, and after having dismounted all the soldiers, Borda began a cruise, but attacked by the enemy squadron, he sustained a long fight and had to surrender, for lack of sufficient strength, after a heroic struggle. The reputation he had acquired as a scholar made him treated with distinction by the English, who sent him on parole in France

Borda had begun his studies at Dax, at the Barnabite College, and from that time gave remarkable clues to the surprising facility with which he judged objects presented to his mind. The teacher dictated in French, the pupil wrote in Latin, and at the same time he made, under different terms, a second translation of the duty for his neighbor.

At the age of 21, in 1751, he had been introduced to d'Alembert, who asked him about mathematics, and wrote: "He will certainly go very far, and I would like his position to make him think of the Academy. will be a very big subject for sure."

Borda always prizes celebrity, but much more to the glory of having been useful to men, said Lefèvre-Gineau, in the historical notice read at the public meeting of January 4, 1800 of the National Institute , to which he had belonged as a member of the first class.

One of the streets of Paris, on the right bank of the Seine, bears the name of Borda. A beautiful statue was solemnly erected in Dax, on the Place de la Halle, next to the cathedral, May 24, 1891, in the presence of the President of the Republic, Mr. Sadi Carnot. It is the work of Mr. Aubé, one of the authors of the monument of Gambetta, on the Place du Carrousel, in Paris. Borda is shown standing, wearing the uniform of the Marine Corps, holding in her hand her reflection apparatus, calculating the astronomical bearing of the ribs. At this solemnity, speeches consecrating his scientific glory and exposing his works and his inventions, were successively pronounced by the President of the Republic, MM. Taillebond, Secretary of the Subscription Committee; Milhes-Lacroix, Mayor of Dax; Admiral Paris, Bouquet de La Grye, members of the Academy of Sciences, and Barbey, Minister of the Navy.

Until the erection of this statue, the physical memory of Borda was recalled only by a bust placed on the ship-school bearing his name.