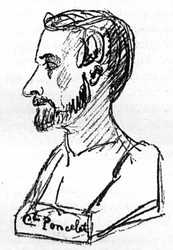 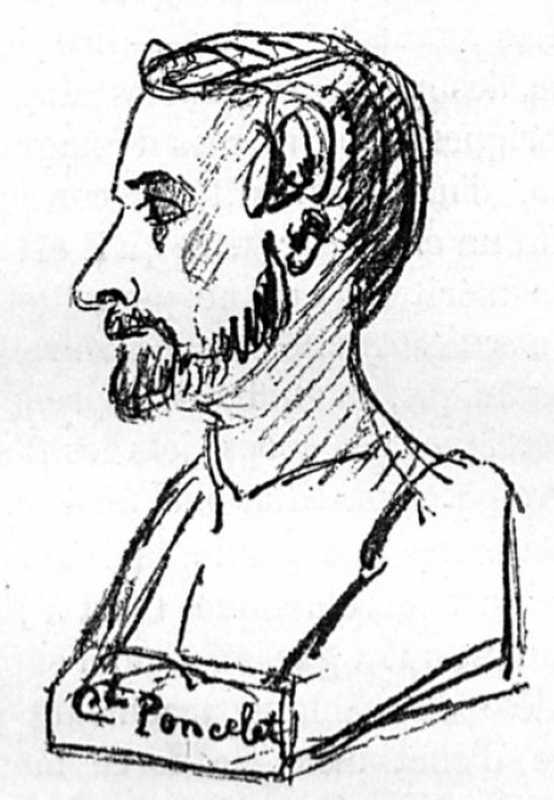 Jean-Victor Poncelet is one of 72 scientists whose name is inscribed on the first floor of the Eiffel Tower. He is the 4th, on the face facing North.

General Jean-Victor Poncelet, French geometer, was born in Metz on July 1, 1788. He died in Paris on December 22, 1867. He quickly completed his classical studies, making two years of one, to indulge in mathematics, for which he felt an irresistible penchant. Admitted in 1807 to the Ecole polytechnique, in the first ranks, he came out among the lower numbers, having too specialized in the branch that was his passion. He passed through the Metz School of Application and took part in the Russian campaign. He was taken prisoner at Saratoff, on the Volga, and sought in his work a diversion to the sufferings of captivity and isolation. Reduced to his recollections of the Lycee de Metz and the Military Schools, where he had cultivated with preference the works of Monge and Carnot, deprived of every book and every instrument, he began by taking over from the elements his mathematical studies.

Returning to France in 1814, he laid the foundations of the original research that illustrated it and published, in 1822, the work that was the main foundation of his fame, that is to say, the Treatise on projective properties of FIGS. He published successively his Theory of the centers of the harmonic means and reciprocal polar, his analysis of the transversals, his theory of multiple involutions. Until 1834, he remained in Metz, where he created the mechanics courses instituted at the School of Application and City Hall. At that time, he was called to Paris by his election to the Academy of Sciences, March 17, to replace Hachette in the section of mechanics, and by his appointment as a professor in the chair of applied mechanics, created specifically for him to the Faculty of Sciences. In 1848 he was made general by the happy influence of Arago. He commanded the Polytechnic School this year until 1850 and was elected representative of the people at the Constituent Assembly. In 1830 he had been General Councilor of the Moselle. There are limited his political titles. Returning to private life, he devoted himself more ardently than ever to science; not only was Poncelet an original geometer, but he was also a remarkable mechanic. It is to him as much as to Coriolis that we owe the superior simplification of the intelligence of rational mechanics. As a scientific opponent of Cauchy, Poncelet proposed to give to geometry the wings whose algebra had been provided for a long time before, that is to say the means of reproducing by constructions, the singularities of algebraic solutions embarrassed by imaginary. Endowed with a boldness, with an originality of extraordinary design, he was a creator, a title which is rarer and more difficult to deserve than one thinks, and carried in all fields his sagacity and his marvelous spirit. 'analysis. It was he who, by studying the first, the geometric motions of bodies, laid the foundations of the science that Ampere later established, and which, under the name of kinematics, is now part of the classical curriculum. It is to him that is due the hydraulic wheel which has kept its name and which has remained as a model of machine, translating by the greatest sum of useful effect, the motive force that it receives. It is also he who has created this admirable theory of the polar, whose application to geometry has renewed the face of this science, by replacing, with rapid and luminous reasoning, the painful and complicated demonstrations of the old methods.

Poncelet bequeathed to the Académie des Sciences a sum of 25,000 francs to reward annually the author, French or foreign, which would compose the most important work for the progress of pure or applied mathematics. His eulogy was pronounced by Mr. Joseph Bertrand in the public session of December 27, 1875. All the works of Poncelet were published by the house Gauthier-Villars and son. His name was given to one of the streets of Paris, on the right bank of the Seine.

The portrait was done on a drawing executed from nature. This is the sketch of the project of his bust which is today at the Palais de l'Institut de France and which was made when Poncelet was only commander of artillery.