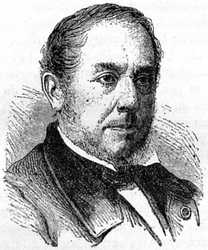 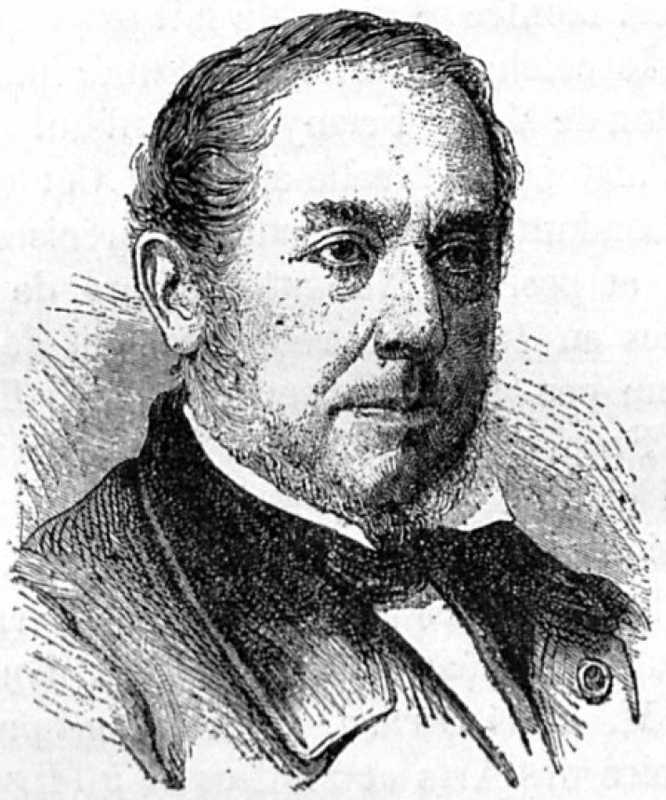 Jules Pelouze is one of 72 scientists whose name is on the first floor of the Eiffel Tower. He is 16th, on the west facing side.

Theophile-Jules Pelouze, chemist, was born in Valognes (Manche) on February 26, 1807. He died in Paris in 1867. He is one of the most brilliant students of Gay-Lussac, who early welcomed him in his laboratory and encouraged his tastes for work and research. After employing him as a preparer, he had him appointed professor of chemistry at Lille, then a tutor at the Ecole Polytechnique, and finally a tester at La Monnaie. Gay-Lussac often said to him: "Teach first before looking, Teaching is learning twice, and when you know it, you will find better." Pelouze, who was endowed with a lively imagination and an indefatigable ardor, followed the advice of his master, and had only to congratulate himself on it, for he became a fruitful innovator in organic chemistry, in mineral chemistry, in industrial chemistry, which he has in turn enriched important discoveries. From 1863 to 1867, we had the pleasure of assisting him in joint chemical expertise with J.A. Barral, and we witnessed the inexhaustible resources of his mind always awake and happy in his predictions.

Pelouze discovered the law of pyrogenic acids and he gave a process for the manufacture of tannin. He made the first conclusive research on the properties and composition of beet sugar by demonstrating its identity with that of cane. He first prepared the cotton-powder, which he named pyroxile, and it is he who indicated and isolated the oenanthical ether, to which the wines owe their bouquet. In butyric fermentation, he reported the synthetic production of a fatty substance with glycerin and an acid. - That's his lot of discoveries in organic chemistry.

In inorganic chemistry, he discovered a new class of salts, nitrosulphates, whose acid composed of three elements, sulfur, nitrogen, and oxygen, belonged to a previously unknown genus. He has given a new method for the determination of copper, discovered the greenish cyanide of iron, and perfected the processes of manufacture of glass by introducing into it the use of sulphate of soda.

Industrial chemistry is indebted to Jules Pelouze for the large-scale preparation of artificial soda and the discovery of aventurine, a chromium-based material which the lapidaries have seized. Let's not forget his work on the distillation of lighting gas. It is not only in the laboratory that Pelouze was a partisan of the experimental fact, but also in the famous Treatise on Chemistry published with the collaboration of Mr. E. Fremy, now director of the Museum of Natural History in Paris. This book is most abundant in precise information, in numerous and positive details. Appointed a member of the Academy of Sciences in 1837, replacing Deyeux, he was soon after the successor of Thenard at the College de France. He was with Barreswil one of the chemists who helped Claude Bernard in his physico-chemical studies applied to experimental physiology. He left many students and among the best, we must mention Péan de Saint-Gilles, who died prematurely, and Aimé Girard, currently professor at the Conservatoire des Arts et Métiers and the Astronomical Institute in Paris.

Pelouze liked to recall that after becoming familiar with the manipulations of pharmaceutical chemistry, he had competed for the service of hospitals and had been appointed intern at Salpetriere. Placed under the orders of Magendie, professor at the College de France and Le Chevalier, professor at the Ecole Supérieure de Pharmacy, it was not in this milieu, however, that he found this powerful and friendly patronage which, after having decided his future , accompanied him throughout his life. Chance alone gave it to him. On Sunday, he was going to spend the day with his father, then employed at the forges of Charenton. Returning from one of these visits, surprised in the middle of the road by a storm, he wished to take his place in a passing cuckoo which contained only one traveler with the sleepy coachman. He motioned, but the car did not stop. Then he ran quickly, jumped at the bridle of the horse. The traveler intervened immediately. It was Gay-Lussac, himself coming back from the forges and who had rented the car for his personal use. He allowed Pelouze to take his place beside him. The conversation began, took a scientific turn and, as a conclusion, the great chemist offered the beginner to receive him in his laboratory. This decided the future and fortune of Pelouze.

One would be ungrateful to the laboratory that Pelouze created in his turn, if we did not recall that it was the scene of one of the greatest discoveries of modern physiology. It is in this scientific asylum, of which Claude Bernard was one of the assiduous hosts, that he discovered the true role of the liver, a fundamental organ whose function remained obscure, and it was here that the production of sugar was discovered. it develops. One of the streets of Paris, on the right bank of the Seine, has received the name of Pelouze. His portrait was done on a drawing executed in 1860.