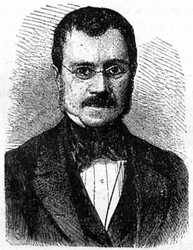 Jules Petiet is one of 72 scientists whose name is inscribed on the first floor of the Eiffel Tower. He is the first, on the face facing West.

Jules-Alexandre Petet, an engineer, was born in Paris on August 5, 1813; he died there at the end of 1885. A little nephew of Claude Pétiet, a statesman and French administrator (1749-1800), nephew of General Baron Pétiet (1781-1858), he entered the great industrial movement which began in to animate France as early as 1825, having passed through the Central School of Arts and Manufactures, recently founded by Lavallée. In 1829 he graduated with a degree in metallurgical engineering. In 1842, he was attached by Perdonnet to the service of the Versailles railroad (left bank). Three years later, he moved to the exploitation of the northern lines and became chief of the equipment in 1848. In 1867, he took the direction of the Central School and continued the glorious traditions of Perdonnet who had just died and who had appointed for his successor.

The general service of the railways has received from Petiet considerable and incessant improvements. Not only he gave the example by his practical indications, by the word, but also by his writings. He left on the subject of works that have been read and meditated by the brilliant generations of engineers who have succeeded each other for more than twenty years in the state administrations, private factories, public worksites.

Jules Petiet also published a memoir that remained famous about the accident of May 8, 1842, and the examination of the technical questions raised by the indictment against the Paris Railway Company at Versailles. He was the collaborator of Eugène Flachat in the Composite Reports for the establishment of the Rhone-Rhine Canal, as well as that of Le Chatelier for its Treaty of Iron and Melting. It still owes a collection of projects, treaties and works relating to railways, which is a source of valuable documents on the subject.

Jules Petiet liked to recall that his great-uncle Claude Petet was buried with great pomp, in 1806, in the Pantheon. He had deserved this supreme honor by the services rendered to France and to the cause of civilization during the Revolution and the Empire. Appointed governor of Lombardy, in 1800, by the First Consul, for several years he had administered with wisdom and skill that province, to the point of succeeding in making French domination popular. He had not hesitated to create roads, to increase the canals, convinced that it is by the numerous and easy means of communication that one can especially make a country happy and prosperous. Being a minister of war, during the National Convention, it was also he who had issued the decree of July 27, 1795, which constituted the artillery committee, much as it has remained to this day. It was he who had the arms of the Dominicans of St. Thomas Aquinas confined to the Convent of Armories and Armor, locked up in the convent of Feuillants, to form the Museum of Artillery. Jules Petiet was proud of all the services rendered to his country by his illustrious ancestor, and he always sought to draw inspiration from them in the acts of his life.

The portrait above was made from a drawing made in 1868.