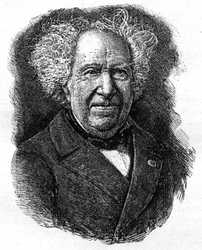 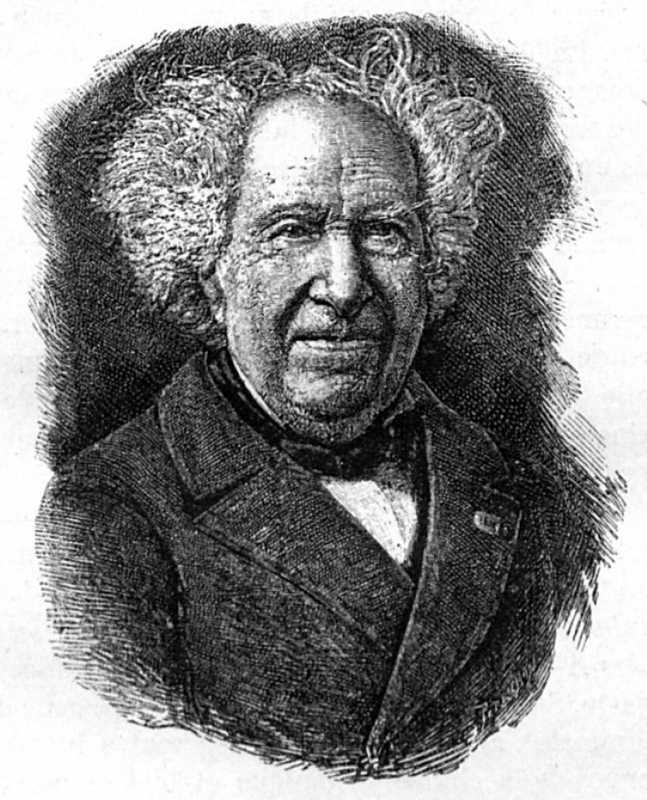 Michel Cheuvrel is one of 72 scientists whose name is inscribed on the first floor of the Eiffel Tower. He is the 14th, on the face facing North.

Michel-Eugène Chevreul, a chemist, was born in Angers on August 31, 1786. He died in Paris at the Jardin des Plantes on Tuesday, April 9, 1889, at one o'clock in the morning, "slowly fading away like a lamp where there is no more oil ", according to the expression of a witness of his last moments, having lived one hundred two years, seven months and eight days. He was the dean of scientists around the world.

The father of Chevreul was a distinguished physician, who inspired him with a taste for science, and sent him early to the capital, where, put in touch with Vauquelin, he was taken by him as a preparer, although the a newcomer was scarcely sixteen. But Chevreul, who was to live so many years, was very early in everything. Under the Consulate, his scientific notoriety already designated him to the attention of Bonaparte, who charged him with several scientific reports, and later, in 1813, appointed him an officer of the University and professor of chemistry at the Lycée Charlemagne. At this time of the continental blockade, he was attached to the laboratory of the Museum of Natural History; it was there that he knew Michel Faraday, who accompanied Humphry Davy; they had both obtained, from Napoleon always eager to please the scientists, the authorization to pass through France closed to foreigners, to go to Italy. These two great men had witnessed some of his early experiences and had predicted that he would go far. Chevreul was fond of recalling these memories, as well as the tragic events he had seen unfolding before his eyes during the French Revolution. Thus at the age of eight, on the Grand'Place d'Angers, he had witnessed several executions on the scaffold. He had kept from this sinister impression an invincible horror against the death penalty. He never failed to proclaim his feelings in this regard, whenever he found the opportunity.

Chevreul believed in the indefinite perfectibility, moral and physical of man and the unlimited power of science. The Eiffel Tower, which represents so many acquired notions, was in his eyes a living synthesis of all the facts accumulated in theory and practice for a great many centuries. He loved in the last days of his life to visit the Champ de Mars to see the progress of the works of the Exposition of 1889. Eight days before his death, he had himself brought once more to the Trocadero, in a closed car. When he was shown the Eiffel Tower, at the top of which floated the tricolor flag, a smile of joy illuminated his face and he clapped his hands to applaud this event.

Chevreul has published more than 650 memoirs, papers, books, brochures. His first work is entitled: Chemical examination of fossil bones found in the department of Eure-et-Loir. It was printed in 1809 in the Annals of Chemistry. He was twenty years old at the time. His fine research on fatty substances of animal origin led him to explore all the unknown regions of organic and biological chemistry. This admirable study led him to the discovery of the stearic candles (1828-1831), who introduced a revolution in domestic lighting and which enriched thousands of people, without ever having thought of drawing from this discovery, which spread throughout the universe, that the prize of 12,000 francs which was awarded by the Institute.

Appointed director of dyes at the Manufacture des Gobelins, he devoted himself to the study of colors, their applications to the industrial arts, the assortment of colored objects. He established the law of simultaneous chromatic contrast and explained the phenomena due to the mixing and juxtaposition of colors. He has proved in a rigorous way that one can imitate a colored object by painting it differently than one sees it. Chevreul's investigative spirit has been extended to a host of admirable discoveries from the scientific point of view, which are very valuable because of their practical applications. The progress of agronomy, physics, medicine, owe him the most useful applications, as well as most branches of industry. The manufacture of soap, for example, has become important only since his research on the saponification of fatty substances by soda, potash and barite. Gifted with a deep philosophical spirit, Chevreul has left high writings, notably a book on the Method a posteriori which can be put on the same rank as the Preface of d'Alembert, placed at the head of the Encyclopedia of Diderot, that the Reception Speech at the French Academy of Buibon, JB Dumas' Chemical Philosophy, the introduction to the study of Claude Bernard's experimental medicine.

Chevreul had entered the Academy of Sciences in 1826; almost until the last moment, he was present at all the sessions. The last time he came, it was May 22, 1888. He did not miss one for 63 years! In 1830, he was appointed to the Museum of Natural History, as successor of Vauquelin, in the chair of chemistry.

Chevreul attributed his extraordinary longevity to his taste for work, his sobriety and his culinary principles. "The kitchen must be scientific," he said, "and not artistic, and all food must be thoroughly cooked, which is the secret to avoiding disease and delaying death." Let's add that he was a water drinker.

The statue of this great scientist was made and erected solemnly during his lifetime in the galleries of the Museum of Natural History, in Paris, on the occasion of his centenary, August 31, 1885. His name was given to one of the streets of Paris on the right bank of the Seine.

The portrait that represents him here was photographed by Jacques Barral, according to his nature, on the very day when he was completing the last day of his hundredth year.